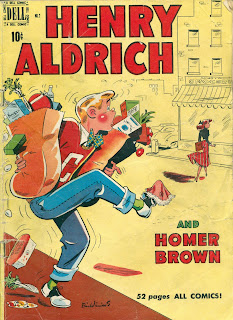 I haven't done one of these "Is This Stanley's Work" posts in awhile. For the sheer sweet sake of variety, here's a return to that occasional berth on Stanley Stories.
A potential problem with focusing on one subject so intently, as I do here, is that, after awhile, it becomes inevitable that I'm going to repeat myself--in story choices, commentary, et al. I strive to keep this blog fresh for you, the reader, and for me, the writer.
As well, as I continue to explore the back-waters of the Dell Comics output from 1942 to 1962--prime years for John Stanley, who remained alarmingly prolific for these two decades--I find a certain amount of pieces I'm not 100% sure about.
This story is in that category. It has some tell-tale Stanley-ian touches, both in characterization and technique. It feels like it could be a Thirteen Going on Eighteen story in many ways.
And, because of Bill Williams' elegant cartooning, there are obvious ties to Stanley's Dunc 'n' Loo.
Still... I dunno...read this story and tell me what you think.
The puzzler is that, according to "official" comics history, John Stanley only wrote some of the first issue of the Henry Aldrich comic book. The very best story from that first issue (and, quite honestly, the only one I feel is truly Stanley's work) was posted here awhile back. It is burned into my memory, as it was the last story I posted on my dearly departed, much missed Mac Mini, which kicked the bucket mere hours after that post, which you can see HERE.
I remain optimistic that this piece, from the second issue of Aldrich, may be Stanley's work. The stories in this series vary greatly in narrative quality, even within a single issue. This suggests, to me, that a number of writers worked on this series. 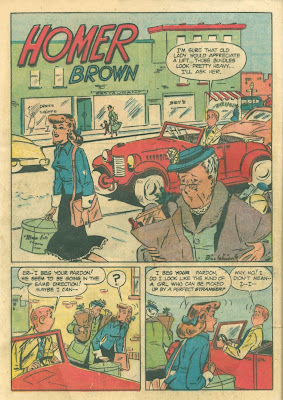 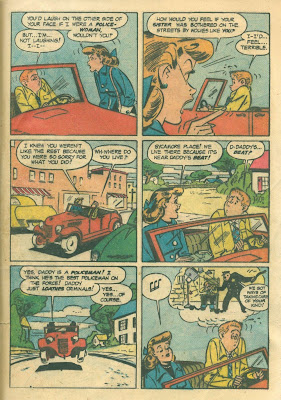 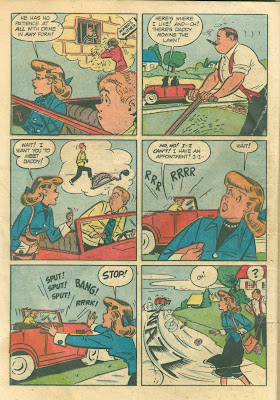 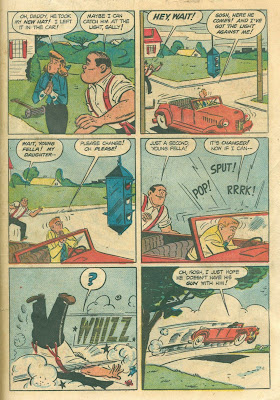 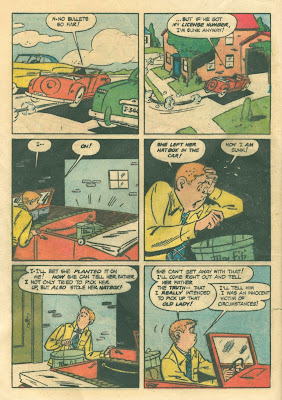 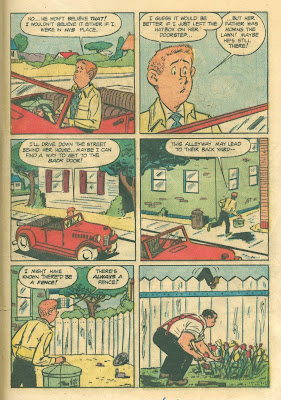 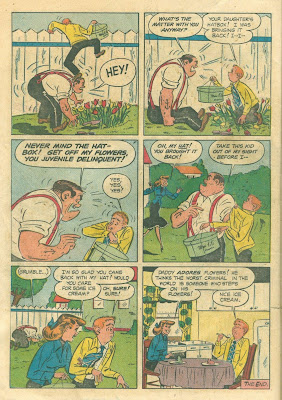 The Loo-like qualities of Homer Brown, nebbishly, unconfident sidekick to all-American boy Henry Aldrich, the coarse, aggressive, single-minded vision of the girl's father, the girl, herself, who is accusatory and threatening, yet understanding and assured, the WAZZ and WHIZZ SFX of Homer's jalopy, and the non-sequitur final line of dialogue that manages to fabulously conclude the story...

These elements all suggest John Stanley to me. And, as Bill Williams was a strong enough visual stylist to enforce his own layout concepts on Stanley's writing, the story's slightly offbeat feel mirrors the later Stanley/Williams collaboration on Dunc 'n' Loo and Kookie.

Stanley hadn't yet gotten into the staccato style of writing that would be common in the later 1950s. His Little Lulu stories of 1950 share a similar laid-back vibe to this story.

Well, durnit, I've just about convinced myself that this is John Stanley's work. All the same, I welcome your feedback. What do you think?
Posted by Frank M. Young at 7:08 PM

I wonder if a Dell comic boiok editor ever pulled a stack of comics written by John Stanley out of a drawer, handed them to a new writer and said, "Make your stories like these." To me, that's what this story feels like. As you pointed out, there are some stylistic aspects that are characteristic of Stanley's work. I'm certainly not the expert you are, Frank, on Stanley's work. But, since you asked, I'm going to say this was written by someone other than Stanely who was deliberately imitating him. So, instead of a "Zazzz" sound effect, we've got "Whazzz," for instance. Aside from similar but slightly different details like this, there are three rather sutble aspects to this story that make me conclude it's not Stanley. First, the rhythm is different. The comic beats come at different places than you'd expect in a Stanley story. Secondly, the story doesn't feel as pushed to it's logical comic extreme as you find in Stanley's work. In the Henry Aldritch story you reprinted from the first issue, Stanley pushes the idea of Henry locked out of his house to ridiculous extremes. In this story, the Dad chases Homer for a few panels and then silently stops. I think Stanley would have stretched this out more. Lastly, and this is subtle indeed, the characters feel as if they are self-conscious... as if they know they are actors on a stage. I realize one of the wonderful things about Stanley's writing is how naturally his characters do absurd and outrageous things. Here, it feels a little forced to me. Again... these all just my own perceptions. Maybe Stanley did write this but had a bad day. The motif of the (anti)hero being chased by an older man is one that crops up here and ther ein Stanley's stories, such as Mr. McOnion chasing Sluggo across the pages pages of a Nancy Summer Camp Giant. In any case, it's great you are turning over every rock in your search... keep going! I really enjoy your blog!

I'm not sure if it's Stanleys or not, but it's a great post.

I am a big fan of OldTime radio as well as comics, and love seeing these adaptions of radio shows that I didn't know existed!