Gabriel's recent post over at Joyville put a bee in my bonnet to take another look at the three Little King one-shots of the mid-1950s. About two years ago, I posted one story from the first LK one-shot, and wondered aloud if this was Stanley's work.

General consensus says "yes," and other bloggers have shared stories from this trio of curious but welcome mid-career John Stanley comix. This short-lived series was quite of a piece with Stanley's ongoing Little Lulu and Tubby material. The stories got funnier and sharper as they continued.

Today's selection is from the last of the Little Kings. These are not good scans (and, like much of the material I post here, not my scans), but they'll do for online reading. "All In The Game" offers a strong preview of things to come in Stanleydom.

A more arch, brassy tone surfaced in Stanley's writing, by 1956, but there were certain modes that Little Lulu and Tubby could not support. Those series' well-defined settings, characters and its faithful readership demanded a status quo of more laid-back storytelling. That said, Stanley's work on the Lulu titles, from 1955 on, becomes more frantic and kinetic.

That energy is largely held at bay, and reserved for shouting matches between characters, and for the antics of rogue characters such as Gran'pa Feeb and The Little Men From Mars (Stanley inventions that didn't have to conform to the tight rules that governed the Marge Buell-owned cast members).

"All In The Game" anticipates the madcap-yet-dry likes of Stanley's late work--particularly his final effort for comics, the first issue of O. G. Whiz (which can be read, in its entirety, elsewhere on this blog). 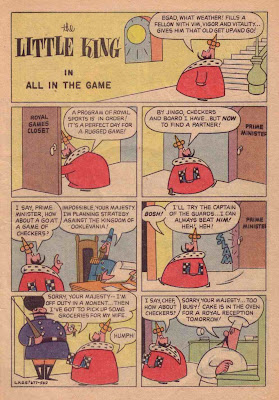 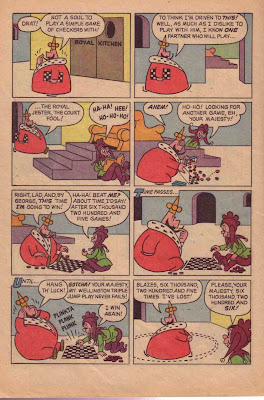 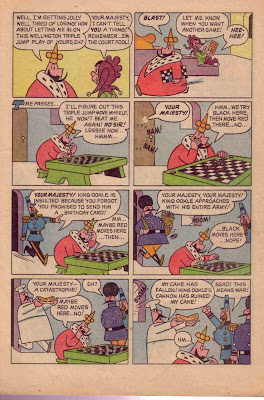 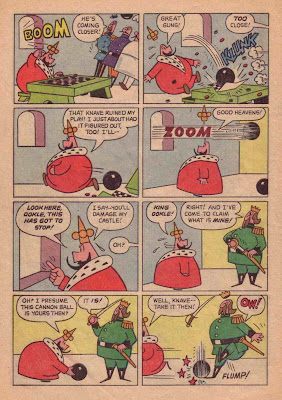 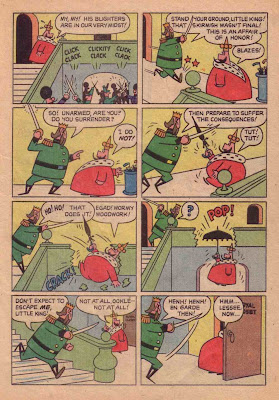 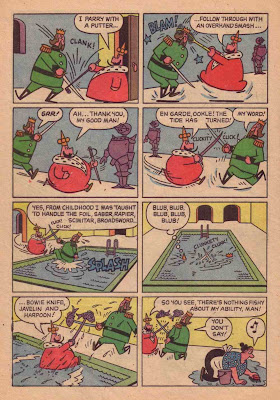 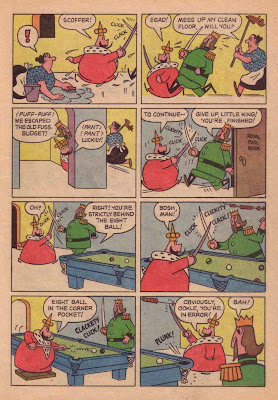 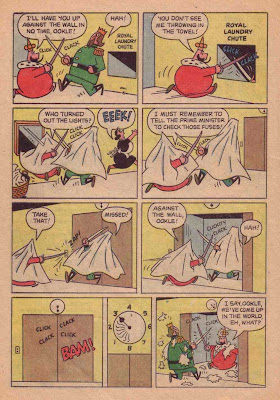 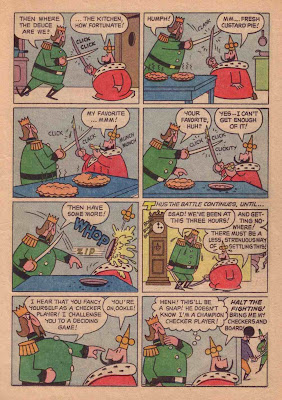 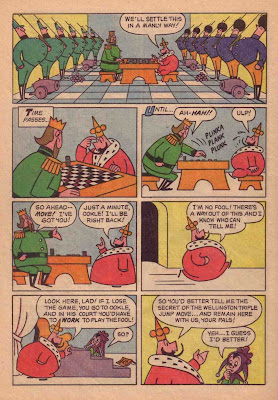 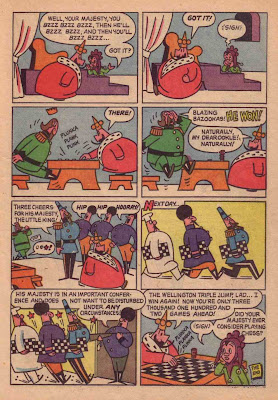 "All In The Game" moves with a delightful vigor and acuity. Stanley's writing is fresh and sharp throughout, despite the regrettable, too-obvious-for-words moment of the custard pie on p.9. As with his work on Dell's Krazy Kat series, Stanley had just realized the possibilities of this new cast of characters and settings. One can see him recognizing their potential for formula-humor (a major factor in his Little Lulu writing) and relishing the departures therein from the constraints of Lulu... when the plug was pulled.

Custard pie abuse aside, there's not one wrong move, or wasted moment, in "All In The Game." Every character and story element is used wisely to raise the stakes, keep them high, and then provide a spot-on comedic kicker finale. Tati-like sight gags, executed with sublime comic timing, decorate this piece.

As I and others have noted, Soglow's little king is a noteworthy example of The Tubby Type. LK is narcissistic, tunnel-visioned, and convinced that the world turns all around him. Unlike most of Stanley's Tubby Types, he is in charge. As ruler of an un-named country, LK is attended to, humored by, and otherwise fully enabled by a massive staff of guards, politicians, service workers and toadies. He is free to do as he pleases, and to pursue paths important to only himself.

Only when outside problems directly (and literally) impact his agenda does this monarch recognize a larger world than his own. But he only accepts it as an annoyance that others are paid to correct. Wars, famines, natural disasters--all just buzzing gnats to be swatted away, so the King can continue his important work.

All the while, the King monologues, feeding his own endless loop of self-justification, narcissism, and irked recognition of the real world's constant intrusions of his bubble. As seen in the one-page gag below, the actions and talk of that real world are just so much BLA! BLA! BLA! to our addled emperor: 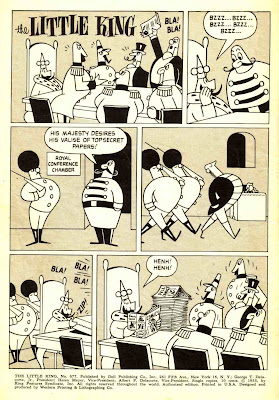 This "Henh! Henh!" business is curious. I don't recall its use by Stanley anywhere else. Stanley was fond of the use of laughter as a character "tell." His laughter is more often borne of cruelty than kindness, and a constant taunt to lower-status characters.

And now, here's "The Search," the closing story from this final Little King: 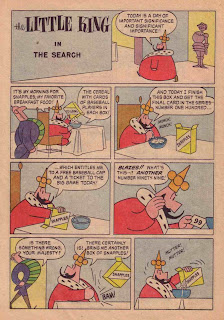 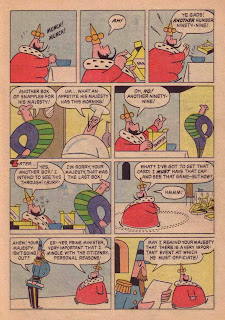 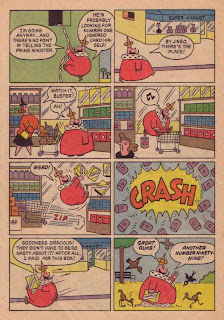 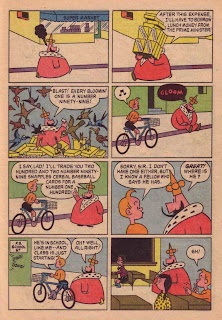 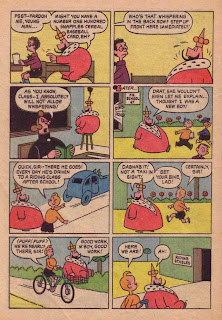 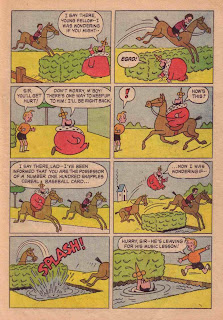 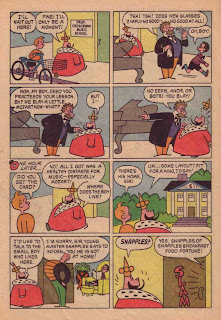 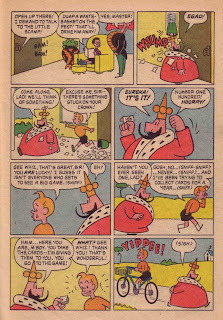 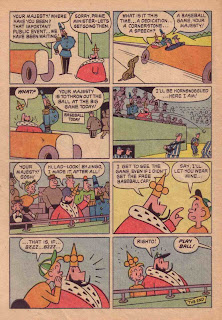 "The Search" wrings great comedy from a simple premise. The King's single-minded pursuit of Ticket No. 100, in an act of Tubby-worthy tenacity, causes him one status-shift after another. Humiliation is not in this King's English; he bears the downs as a necessary means to the single up he so strongly desires.

Yet, the King has a heart, as shown in this story's charming finale--a wrap-up that allows just enough sentiment in the mix to work right. It doesn't cloy--nor does it stop the story's wry humor. It's not an "awwwww..." moment. It just happens, organically and appropriately.

As well, it's necessary. Much as we may adore the scofflaw Tubby Types, we do need to know that there is a heart beneath their thick layers of self-absorption. An agenda-driven maniac is only appealing for so long (e.g., the screen careers of Woody Woodpecker and Donald Duck). Stanley understood his characters well, and skillfully inserted a few drops of redemption when needed.

We know that his Tubby Types aren't going to stop being themselves. But we are tacitly assured that they're not douche-bags. They become deeply flawed protagonists, and we love them for their quixotic faults and shortcomings. There is a consciousness under all the cognitive biases.
Posted by Frank M. Young at 9:27 AM

These types of stories are also great examples of teaching some of the morals that youth need to learn to survive well in the world.

If you get a chance hunt down and check out The Little King leading a double life and actually speaking in the animated Fleischer "Betty Boop and the Little King" (1936) after he hopped over from Van Beuren.