Sugary Wish-Fulfillment Proves Overwhelming To Sentient Playthings; Soldier Bravely On Despite Dyspepsia; Are Feted By Living Desserts: from Raggedy Ann and Andy 34, 1949

Today's story is another of Stanley's "Raggedy Ann and Andy" pieces. For a while, I debated (to myself) whether this was or wasn't Stanley's work. Then I kinda forgot about it.

Cut to this weekend. I'm house-sitting, 23 miles away from my external hard drive, and its cache of John Stanley material. "G-gotta post something... l-losing momentum...ch-choke," I says to myself. Thanks to these still-active cached links to Comicsworld, I scrounged around and met up with this story.

Upon second scrutiny, this piece comes off as a tongue-in-cheek, deadpan skewering of the cuddly-cutesy storybook wish-fulfillment blather that Raggedy Ann and Andy typically delivered--prior to Stanley's short-term takeover.

It's so dryly done that some 1949 readers might have taken it at face value, and quite possibly enjoyed it. But there's just a tad too much intensity to its events. Well, read it and see, and then we'll talk... 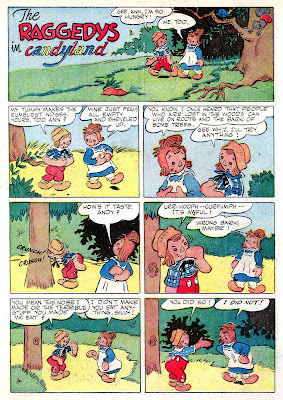 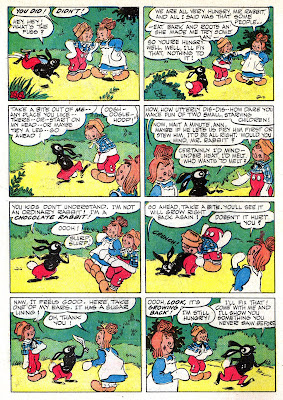 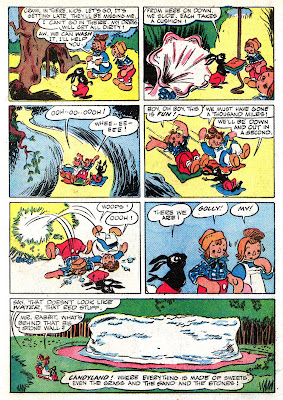 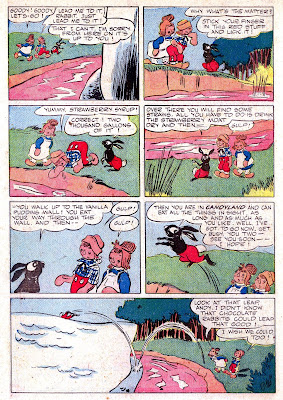 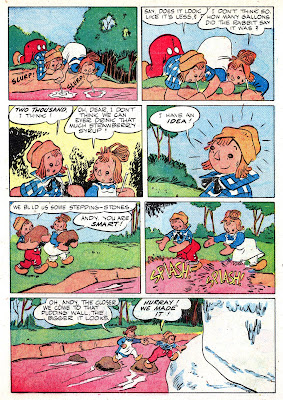 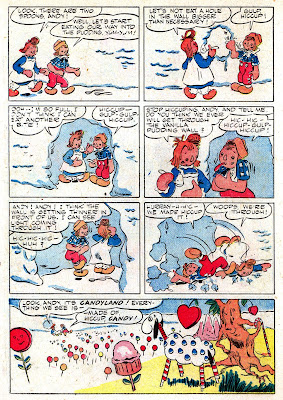 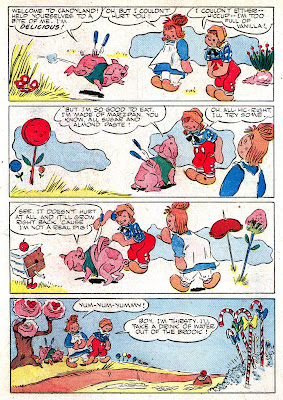 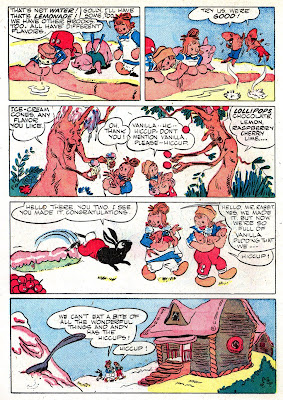 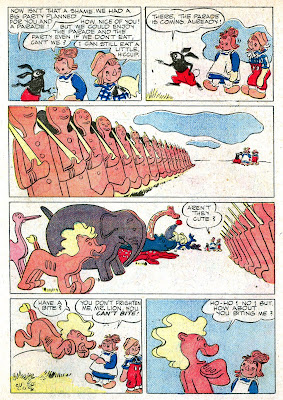 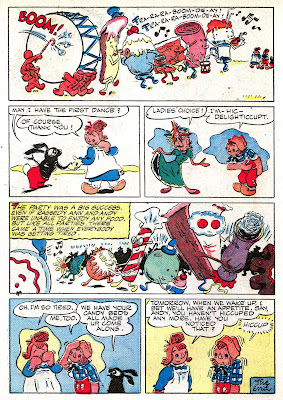 Whether this was written as half-hearted fulfillment of duty (which I suspect) or sneaky sabotage, "The Raggedys in Candyland" offers a sublime satirical "salute" to the worst aspects of Western's editorial policies. Scores of similar stories appeared in the pages of this magazine, New Funnies, Our Gang, Animal, Fairy-Tale Parade and other Oskar Lebeck-edited Dell titles of the 1940s.

These stories, written down to a presumed demographic of precocious, wide-eyed toddlers, traffic in banal wish-fulfillment. Most of the non-Stanley "Raggedy" stories are guilty of this condescending tone. The Raggedys often seek sweets, or visit la-de-dah wonderworlds where the trees are made of chocolate, and vast pools of pudding and lemonade await them.

"The Raggedys in Candyland" savages those toddler tropes. By assigning a gravity--and realistic stakes--to the Raggedys' consumption of sweets, the story's events become a grueling marathon for the two talking dolls. Unlike the stake-less fairy tales typical of these pages, this piece shows the cause and effect of the Raggedys' pig-out without--and this is of vital importance--offering any kind of a moral lesson.

The story's comedy builds as the dolls become weary of the endless deserts, and regard them as a chore to be taken care of, in the stoic fashion assigned to them by Stanley. In ordinary kiddie fantasies, the characters would never stop to calculate how many gallons of strawberry syrup they had to drink--or show a sense of overwhelm at the amount of vanilla pudding before them.

The dolls seem beaten down by this sugary overkill. Once in Candyland, they are blasé. Andy is stuffed to the gills, and suffers from hiccups. Ann has already had her fill of sweet treats, many times over, the the prospect of gumdrop trees, chocolate mountains and marshmallow clouds is almost unbearable to her. They are feted with parades, more goodies, and their hosts expect them to act with unbridled glee.


But the toddler fantasy of eating, eating, eating sweet things and never filling up has already been punctured. The Raggedys endure instead of party.

I'm reminded of some of Justin Green's 1970s stories here: a sense of sorrow polluting what, by ordinary standards, is a happy, harmless fantasy.

The edible animal-like things, which offer themselves up to the dolls for consumption, are typical of the regular "Raggedy Ann" stories. Here, they take on a desperate, masochistic manner. A child might run, in horror, from a pink marzipan pig with a fork and knife stuck in its back--crying cheerfully, "Eat me!  I'm delicious!"

This was, I believe, the first of Stanley's short series of "Raggedy" stories. None of the others share "In Candyland"'s attempt to link with the typical story elements.

Stanley's inventive use of language, for comedic effect, is strong here. He ends the story on one of his typically off-beat grace-notes. Andy's final hiccup is a reminder of the gravity of reality. In Stanley's world, reality always trumps fantasy. It slaps fantasy hard in the face and demands that it step aside. Feet-on-the-ground existence--and how to keep it going, when all goes awry-- is Stanley's currency.

I don't think I've run the "Peterkin Pottle" story in this issue of Raggedy Ann and Andy. If not, I'll do that next time. Depending on what work has in store for me this coming week, that next time is up in the air. I'll keep in touch. Thanks for dropping by.
Posted by Frank M. Young at 10:23 AM