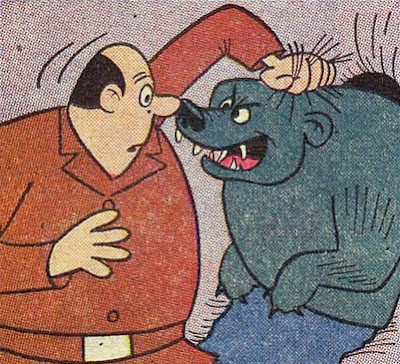 As promised, here is the conclusion of the 1960 Nancy and Sluggo Summer Camp shebang.

"The Dinner Belle" contrasts two schools of cognitive biases towards food: the anti-anorexia of Eadie and the smug entitlement of Camp directory Simply.

John Stanley, like Little Orphan Annie's Harold Gray, tended to give supporting characters Dickensian names--ones that sum up their shortcomings or hang-ups. In Simply's case, his smug, naive expectations fully justify this type-naming. 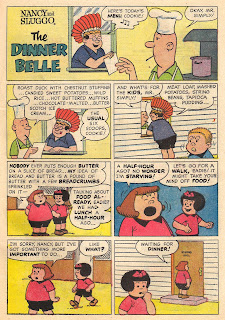 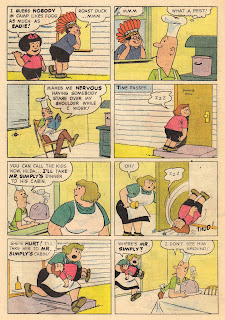 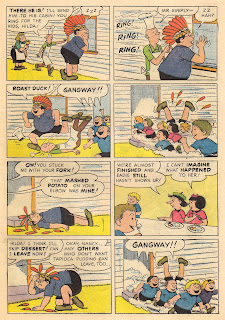 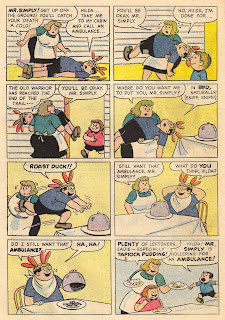 Everything in this rambling book comes to a head in "Lost in the Woods." All storylines intersect, and McOnion gets a terrifying-yet-appropos comeuppance.

Also like Harold Gray, John Stanley was a strong believer in comics karma. Gray's comeuppances are usually of a brutal nature. Stanley's threaten their characters, but never result in death or serious injury. Mind-fudgery and status demotion are typical results of Stanley's comic karma. 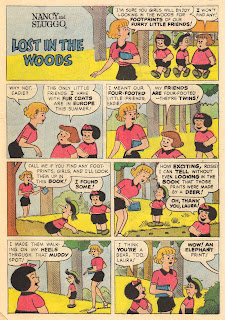 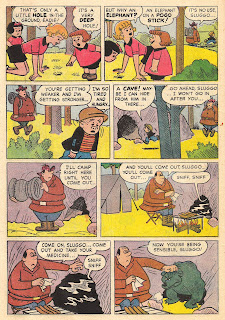 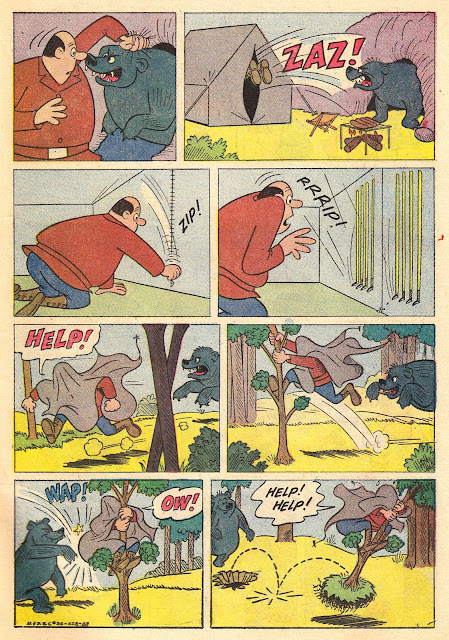 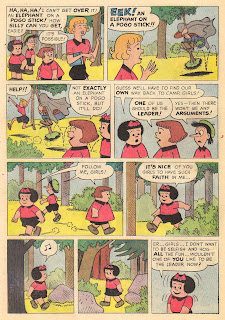 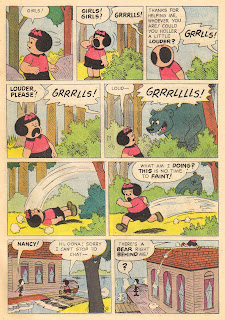 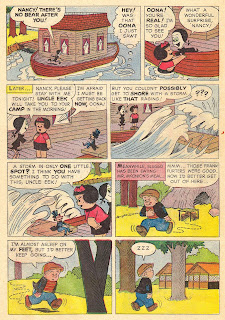 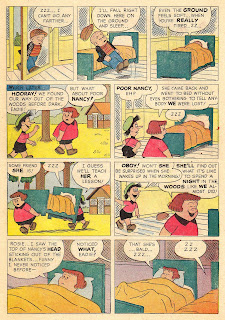 "Lost in the Woods" is by far the liveliest, most genuine sequence in this narrative. Stanley weaves together the book's various threads into a colorful, amusing fabric.

Moments of strong physical/verbal comedy include McOnion's Page-O'-Terror (the larger one here) and Nancy's mistaking of the wild bear's "GRRRRLLLLS" for an echo of her panic-stricken cry to her peers.

Also impressive is how Oona and her world is suddenly whipped into the formula. We're glad to see Sluggo reach Camp Fafamama intact, tho' too late in the game to achieve anything more than arrival.

Stanley would do far better in the second and last Nancy & Sluggo special, which I'll run here sometime.

Stanley brings this narrative to a rousing close with a finale that anticipates the over-reaching anarchy of It's A Mad, Mad, Mad World, while also suggesting the madcap quality of Frank Tashlin's or Jacques Tati's movies. Rollo Haveall is the stimulus of "The Tiger Hunt." 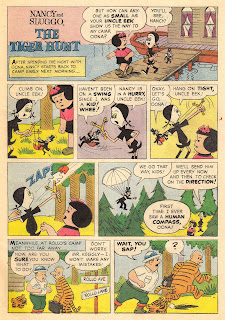 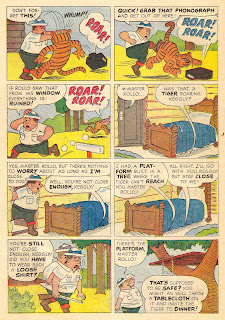 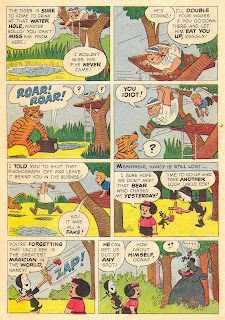 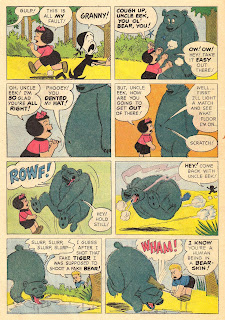 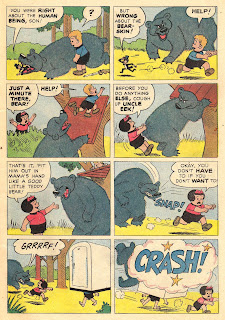 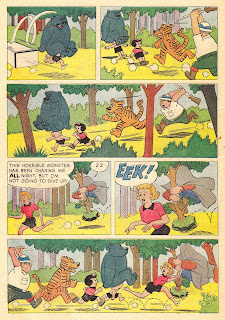 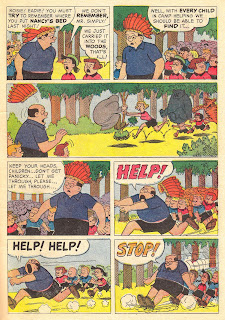 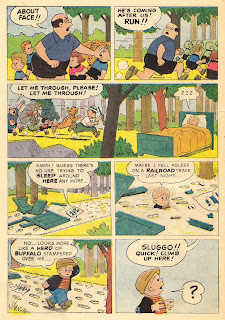 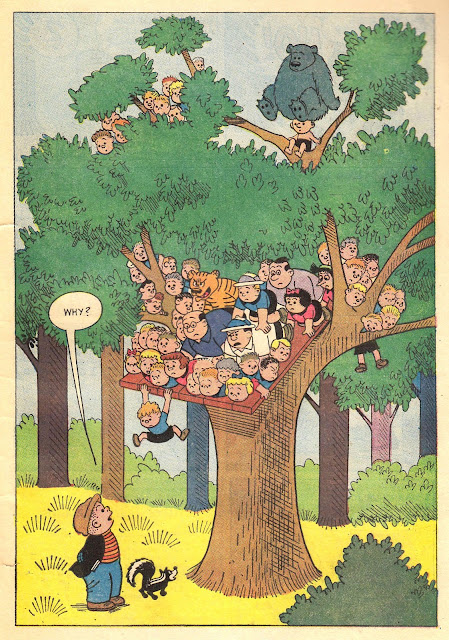 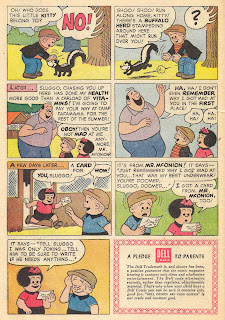 The energy level surges in "The Tiger Hunt," after maintaining too much of an even keel in earlier pages. It's a welcome shot-in-the-arm, and shows Stanley finally investing something of value into this rambling piece.

After a rare and striking full-page panel, this story resolves on an almost-heart-warming note, with the emotional reformation of McOnion. He still has it in himself to send Sluggo one psycho post-card, and this event gives the book's finale a slight kicker of anxiety. (So does the last-panel Pledge to Parents!) 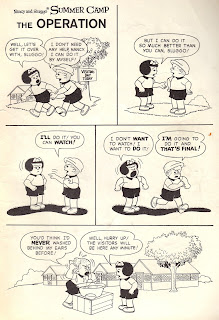 My feeling about this book, overall, is a qualified Meh. It has its moments, and contains some striking anticipations of Stanley's more assured, solid 1960s comedy style. It feels a bit dashed-off, and shows the clear limitations of the "Nancy" cast, in Stanley's estimation. Nancy is a cipher--brilliantly manipulated in Ernie Bushmiller's comics world, but not a strong narrative leader. She exists as a foil for Bushmiller's factory-fresh gag machine, and nothing more.

Only when Stanley works with his creations--McOnion, Oona, and Tweak--does this narrative reach out and grab us. As Rob Clough notes in his recent review of the first Drawn + Quarterly Tubby book:

[b]y nature, Stanley was a world-builder; he felt the need to introduce various comic foils, friends and antagonists for his central characters.  Part of that, I would guess, was Stanley’s way of giving himself raw material to work with; it’s his way of coming up with the variables for his comics writing formulas.

Stanley's Little Lulu casts a long shadow over his Nancy work. If I seem overly hard on this material, it's because it is regressive. Stanley did not grow as a writer with his time on Nancy. He reached into his recent past, and recycled formulas that had grown thin in Lulu's late issues. Though competent, and sometimes inspired, it lays listlessly next to Dunc 'n' Loo or his finest moments in Thirteen Going on Eighteen.

I promise to be more enthusiastic in my next post, whatever it may be...
Posted by Frank M. Young at 2:40 PM