As John Stanley learned comics writing on the job, he took on several licensed properties. Among them were a suite of characters from the newly-formed Famous Studios' attempt at a Technicolor roster of animation stars. 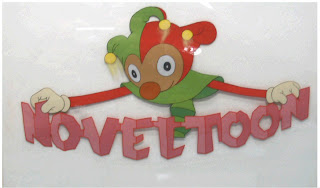 Famous (formerly the Fleischer Studios) tried hard to create a hit in their early, lavish Noveltoons. None of the characters really stuck, save for the Brooklyn-voiced Herman Mouse. The cartoons themselves are curiously compelling, and show a certain promise never quite fulfilled.

Western Publications apparently got a one-year lease on the rights to the Famous "stars." They plopped them into the random mix of Dell's Animal Comics, which played host to Walt Kelly's "Albert the Alligator" (later Pogo) and, in its last issues, to an early John Stanley comic-book original, "Jigger and Mooch."

Stanley cut his comics-writing teeth on the Famous characters, alongside MGM's "Tom and Jerry" and Walter Lantz's "Andy Panda," "Woody Woodpecker" and "Oswald the Rabbit." Here, he formulated his writing style, sense of dramatic narrative stakes, and first played with the three archetypal characters that dominate his finest work.

These Famous-derived stories were completed by moonlighting Famous animators. While they're hardly masterworks, they're of interest as examples of Stanley's early work and emergent sensibilities as a writer and cartoonist. 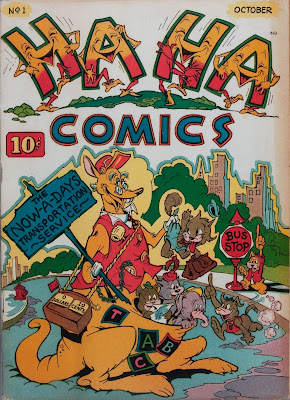 A helpful tool for identifying these Famous Studios-employed artists is the Nedor funny-animal title Ha-Ha Comics. Several Fleischer/Famous staffers have signed work in the early issues of this magazine--including Jim Tyer, who designed the title's distinctive logo. Thanks to recent access to the first seven issues (via the remarkable Digital Comics Museum), Thad Komorowski and I have been able to put some names to the art of these three stories.

Stanley appears to have lettered the first of today's three stories--all from a single issue of Animal Comics. I didn't spot any artist signature, but the layouts are recognizable as Stanley's work. Who knows? It appears that he had some hand in the finished artwork. I'd wager the inker was Bill Hudson.

This "Hector" story, easily the best of today's offerings, is infused with knockabout low comedy and jaunty chatter. It contains many examples of Stanley's windmill motion, lots of loud SFX and one well-placed YOW. Its dialogue is crisp and witty; Stanley seems to have enjoyed writing this story. 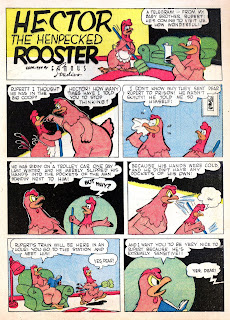 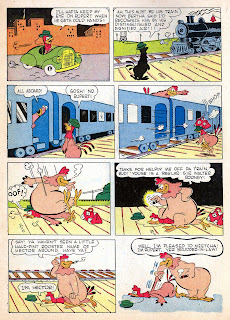 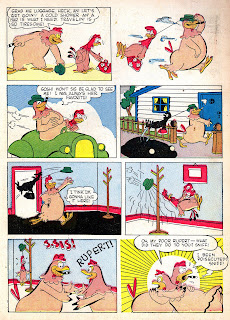 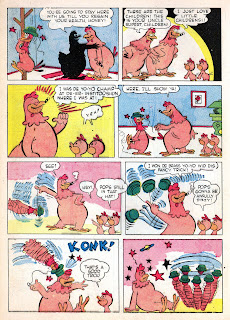 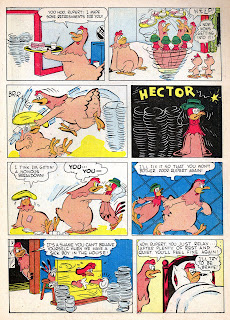 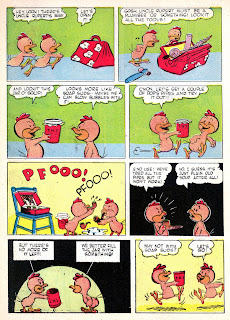 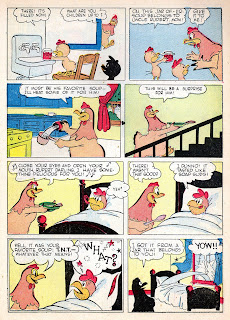 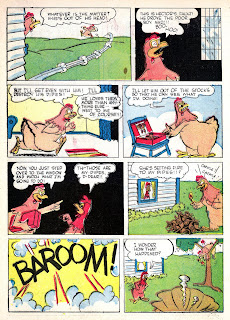 "Blackie Lamb" never really registered with movie audiences. This blatant Bugs Bunny knockoff has a certain horrifying wise-ass charm. Stanley's few stories with this character show more interest in the villain, Wolfie, than in the ostensible protagonists. This is a weak story, but Wolfie's self-absorbed musings show us an early glimpse into the "Tubby Type." Thad K. has IDd the artist as Gordon Sheehan. 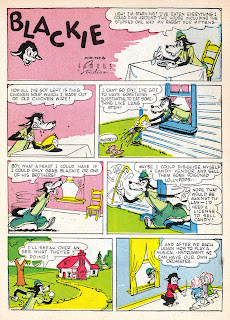 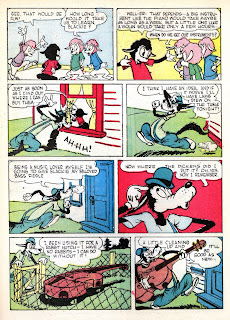 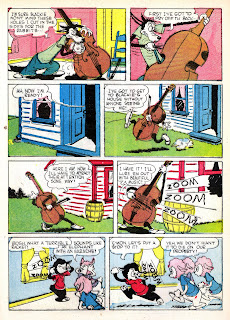 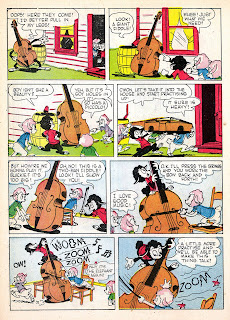 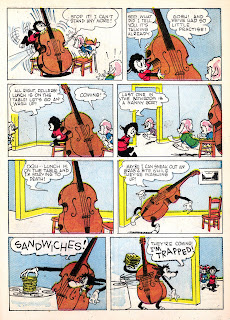 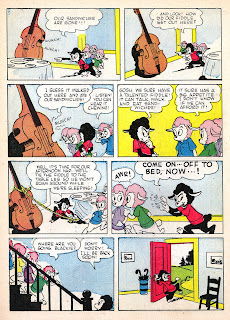 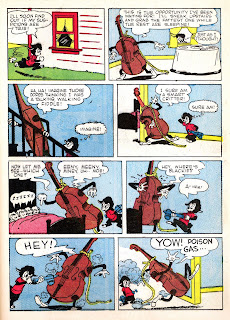 In the manner of Carl Barks' earliest "Donald Duck" short stories, this ain't much to write home about. More vivid physical comedy keeps the pace lively, and, as said, Wolfie's desperate ramblings and ravings are always of interest.

Stanley lettered this story, as well. The artwork doesn't reveal as much of his input as does the "Hector" story. 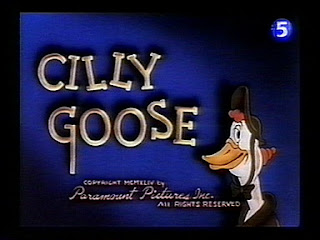 The last, and shortest, of today's offerings riffs off one of Famous' most accomplished and atmospheric one-shot Noveltoons. 1944's Cilly Goose. Thanks to the doings of Thad Komorowski, you can see this little masterpiece HERE.

Western did a few "Cilly" stories, at least one of them written and drawn by Walt Kelly, who inherited the Famous characters once Stanley had either tired of them or was otherwise forced to remove them from his workload.

This story, according to Thad K., is inked by Otto Feuer--later a mainstay of DC's generally lack-luster funny animal titles.

This four-page story doesn't amount to much, but the anxiety of its title character, as she attempts to transport her goose-fruit to market, and to grapple with common superstitions, is at least peppy. It has that unmistakable "Uh oh! Four pages still open! An' we go to press tomorrow morning!" feel to it. Stanley also lettered this story. It looks remarkably like the "Hector" story, so I'll wager that he laid it out as well. 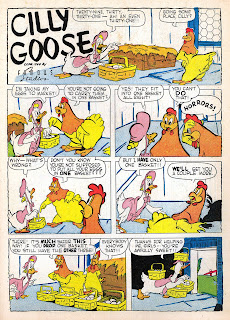 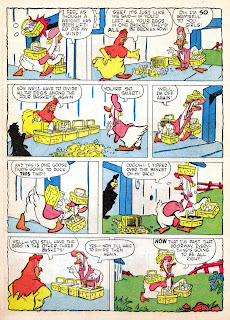 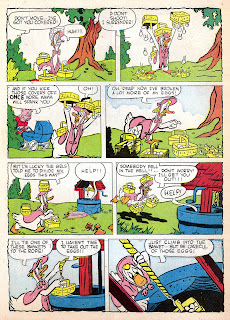 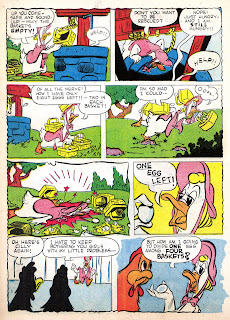 This is a one-pager's worth of material s-t-r-e-t-c-h-e-d into four.

Via stories such as these, John Stanley learned how to write for comics. His enthusiasm often outweighs his ability in these early pieces, but the potential that would come to fruition by 1945 is already visible.
Posted by Frank M. Young at 9:47 AM

Great material, Frank, you know I love Fuh-Fuh-Fuh-Famous cartoons. I can only make educated guesses, but Cilly appears to be the work of Otto Feuer, and Blackie may be by Bill Hudson, both of whom were working at Famous when these appeared. Don't take these as gospel though. I'll see about reposting the animated Cilly Goose.

CORRECTION: Thanks to some research, via HA-HA Comics, I can say with certainty that the Blackie story is the art of Gordon Sheehan, and Cilly is indeed by Feuer. Just for accuracy's sake...