Whistling in the Graveyard: "Woody Woodpecker," from New Funnies 118, 1947

Before we begin, I'd like to share with you an image from the back cover of this 1947 funnybook. '47 subscribers to New Funnies received a sub-standard picture of Andy Panda, suitable for framing, and 100 of these delightfully casual lickem-stickem labels: 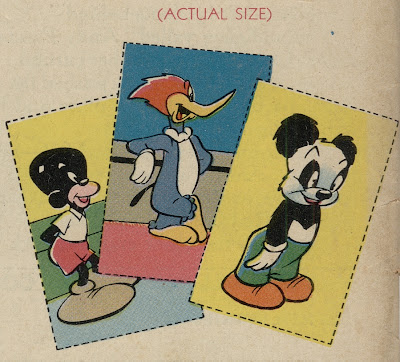 I love how the characters just stand there, doing nothing. Their gaze suggests that they're watching a fascinating event that we don't get to see. Nowadays, they'd have to engage in visual multi-tasking--throwing a Frisbee while texting, or eating a hot dog while skateboarding. (And, of course, Li'l Eight Ball, and his disproportionally freakish feet, would be literally out of the picture...)

That diversion (and catchy image to attract new readers) out of the way, here's today's story. There are my scans.  Because I didn't have access to Photoshop, I had to leave 'em their amber tone of ancient newsprint. If nothing else,these scans offer a solid replica of reading the actual funnybook.

This untitled story has a schizophrenic structure. It begins as a domestic comedy of frustrations, and ends as a spook-show, populated with typical Stanley graveyard-humor tells. Woody acts Tubbishly throughout. No one would choose this as an example of John Stanley's best work. But even his detritus has some value. Read 'n' see... 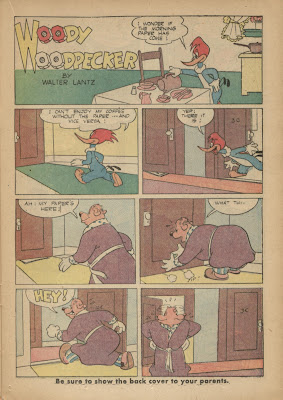 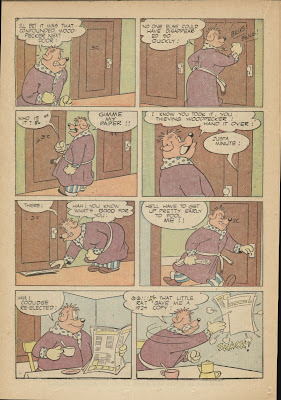 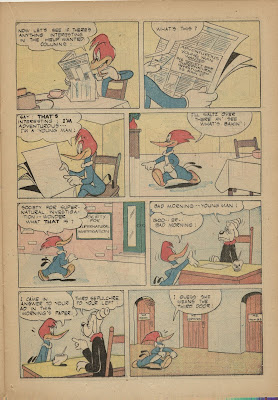 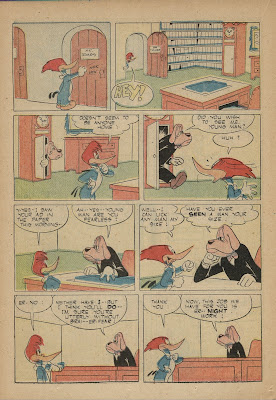 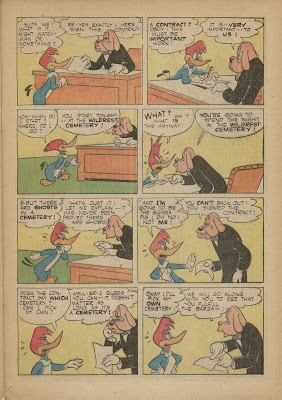 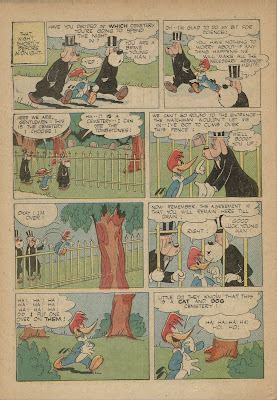 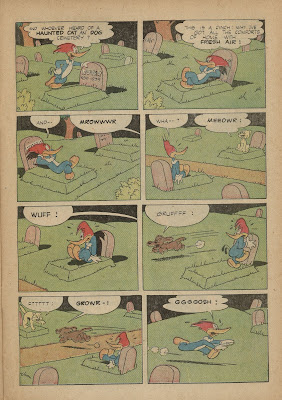 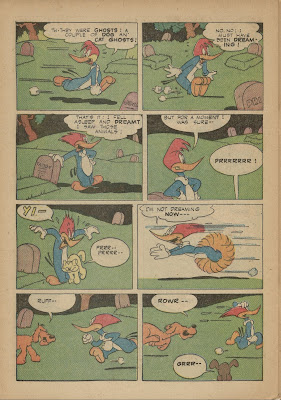 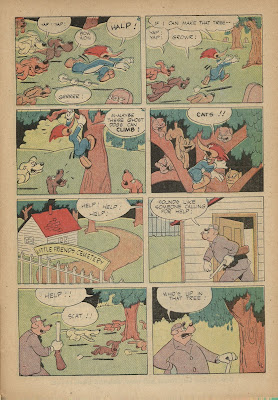 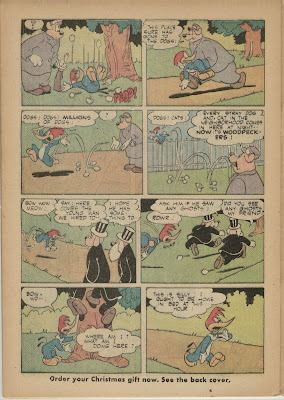 This story shows the merits and flaws of Stanley's spontaneous story-telling. I'm sure that he had no idea the story would shift locales from apartment building to graveyard as he started writing and sketching.

That improvised approach lends a giddy air to the events, tho' they lack the more solid base of a carefully plotted narrative. But a more tightly planned story might not have the remarkable ending of this piece. Indeed, those last two panels save this story. They reinforce the random-Dada aspect of Stanley's Woodpecker. He is a creature of impulse, coasting from whim to whim, not much caring where these abrupt decisions take him.

Stanley was fond of the comically portentous figures seen in this story from p.4 on. The bearded character turns up in several of his 1944-47 stories. They remind me of R. Taylor's 1920s Canadian comic-strip, The Mystery Men, which I doubt John Stanley ever saw: 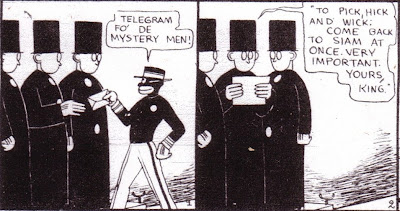 Taylor later became a successful cartoonist for The New Yorker and Playboy. Stanley briefly cracked the New Yorker market, but apparently abandoned it (file under "Research, Further"). Taylor's creepy saucer-plate eyed characters were popular enough to be compiled in hardcover in the 1940s.

The cartooning in this 1947 story is fluent and pleasing. The artist (Dan Gormley, I guess) took pains to make Woody look more like his on-screen version. It's graceful, appealing cartoon art, in which Stanley's hand is less evident that usual.

Stanley returned to the graveyard locale many times in his classic run of Little Lulu and Tubby stories. Stanley's graveyards all look alike, with those cliff-like raised plots and rounded purple-grey tombstones. Background elements are as much as Stanley "tell" as the chompfs and yows.

Next time, you'll see one of Stanley's longest stories, and how it ties into a contemporary art exhibit! Check back on May 21st for the full story...
Posted by Frank M. Young at 11:30 AM

I quite like this one, and have highlighted it in the past on my site, but damned if I can find it (I've had so many losses and changes with servers over the years). Woody's guffawing at the idea of a cat or dog having a ghost, while still believing in human spirits, just smacks of that hypocritical cynicism the meaner priests in Catholic school bandied when they said you won't see you pets in heaven. Just a Thaddish observation.

I have to disagree with you on one point... the Andy Panda picture isn't "sub-standard". It's "standard" at least... maybe better! And I can confirm that it is in fact suitable for framing. At the very least, I had no trouble framing mine. I will acknowledge that it wouldn't have been my first choice among the known Dell subscription premiums, but one accepts what the flea market gods offer.