John Stanley had an impressive amount of cartooning and comic book work published in the 1940s, '50s and '60s. With two exceptions that I know of--his New Yorker cartoon of 1947* and the lone issue of Marge's Little Lulu (#49, published in 1952) that credited him and his staff--none of it is signed. Stanley's signature first appears--in comic books--on the cover of Thirteen Going on Eighteen #12, dated August-October 1964: 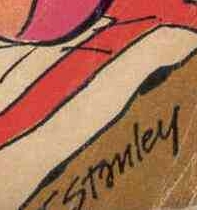 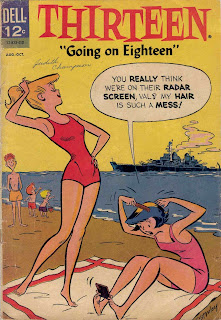 By using Stanley's known cartooning as a guideline, I have been able to determine his hand as a cartoonist in a great deal of other material. Stanley's linework and lettering are the two most helpful tells for me.

Of the two, his lettering is the most distinctive. Stanley was something of a chameleon as an artist. He mostly did his best to emulate the house style of the various licensed characters he handled. This conformation didn't come easily to him.

In his Little Lulu stories, and in some of the "Woody Woodpecker" pieces he drew for New Funnies, Stanley deadens his line, and surrenders a great deal of his personality as a cartoonist. The end-results are professional, but they lack the energy of his best cartooning.

(There are numerous examples of his cartooning work elsewhere on this blog. Use the SEARCH tool to locate them, if you're interested.)

Stanley absorbed much of Marge Buell's style into his mid-1940s cartooning. He seems to have tried his hardest to make good on Lulu. This effort paid off, at the expense of his expressiveness as a cartoonist. The lumpen human figures and stiff lines of his 1946/7 "Woody Woodpecker" stories are extremely close to his Lulu work. Ditto for the humans and urban settings of his original "Jigger and Mooch" series.

Before the stiffness of Lulu set in, Stanley created some remarkable cartooning in the pages of New Funnies and Our Gang Comics. My study of these early efforts, using his distinctive lettering as a compass, has revealed several stories in these titles as being written and drawn by Stanley.

We also have his Little Lulu and Tubby covers, with their bold, vivid brush lines, as a visual guide. Stanley drew many covers for Western Publications, before, during and after his 15 years on Little Lulu. Here is one example, from issue 98 of New Funnies, cover-dated April 1945: 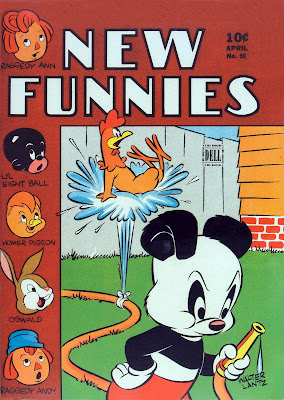 This is a superb example of his pre-Lulu cartooning. Its sharp, buoyant brush lines, vigorous characters and strong, simple design are striking and highly effective. (Stanley didn't draw the character mug-shots to the left, but that's his lettering on the "Walter Lantz" signature.)

Stanley was a great comics letterer, especially in the 1940s. Here's a sample from the "Tom and Jerry" story he wrote and drew for Our Gang Comics #15, 1944: 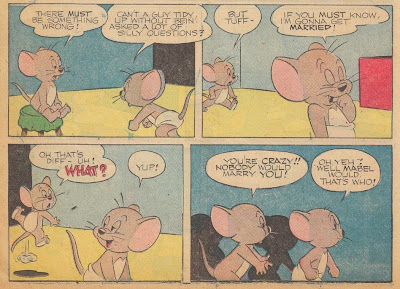 Strong lettering skills were de rigeur for cartoonists and illustrators in the 1940s. Other strong letterer/artists who worked for Western at the time included Carl Barks, Walt Kelly and Frank Thomas. These three artists consistently produced work so visually distinctive that their lettering, while a tell, is a moot provenance.

In his cartooning work of the mid-1940s, Stanley seemed to strive to NOT stand out as a stylist. While his artwork has an undeniable character and energy, as seen in the above two examples, it only exists to serve the story.

The one notable exception is his work for the Raggedy Ann and Andy title, in the late 1940s. His original series "Peterkin Pottle," and his stories with the titular characters, are rendered in a loose, vivid brush line that seems much influenced by the postwar UPA/cartoon modern style. These two series are utterly unlike his other comic book stories in their uncontrolled, playful artwork.

I have recently identified several stories in 1944/5 issues of New Funnies and Our Gang Comics as being drawn by Stanley. In those titles, and in Animal Comics, are other stories that Stanley didn't ink, but clearly lettered.

This "Woody Woodpecker" story, from New Funnies #98, is a superb example of his low-profile, highly effective comics art, and is a fine showcase for his expressive lettering skills: 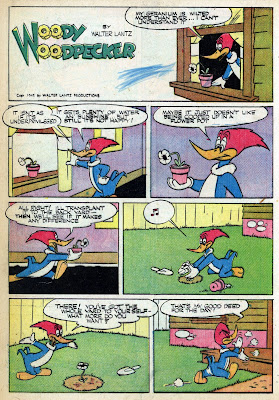 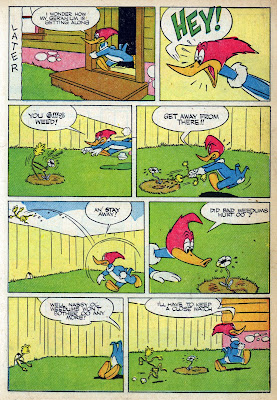 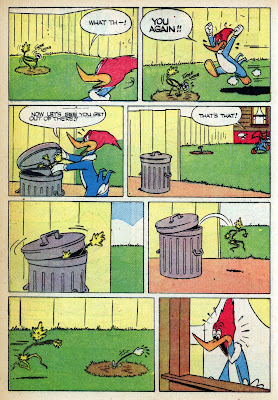 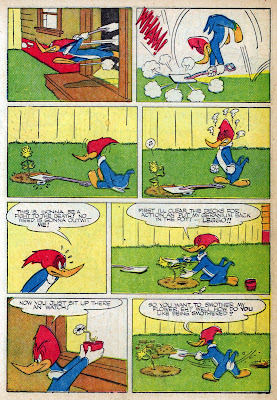 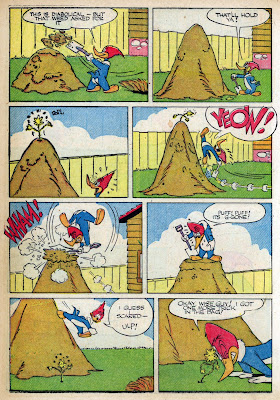 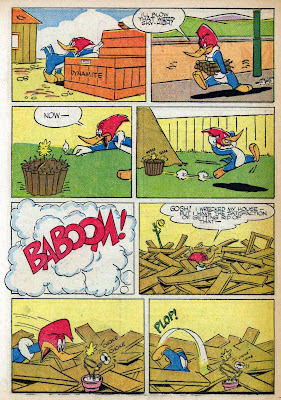 The Walter Lantz cartoon studio, in Hollywood, must have seen and liked this story. They produced an Andy Panda cartoon, The Wacky Weed, directed by Dick Lundy and released on December 16, 1946, that's quite similar to the plot and gags of this piece. The recurring bit with the weed strangling the flower is straight out of this story.

The cipher-like Panda is less effective in the role of harried Voice Of Reason. Stanley's ur-Tubby Woodpecker is a richer choice for this simple, lively humorous narrative. Woody's desperate attempts to cling to the margins of the respectable world make his stakes higher than the contented, dialed-in suburbanite of the Lundy cartoon.

Stanley conveys Woody's frantic angst in aggressive, highly amusing cartoon poses, each line infused with life. His visual take on the woodpecker is closer-than-average to the contemporary animated cartoons. (He does an even finer job of matching the screen Woody in his story for New Funnies #93, which is here.) Stanley was on a roll before the demands of Little Lulu tamped down his vibrance as a comics artist.

Don't get me wrong--his work on the series is fine. I feel he consciously hemmed himself in, in order to please Marge Buell and cinch his position on the series. This spiky vitality wasn't absent from his other work--particularly in the 18 one-page Woody gag fillers he did for New Funnies in 1947 and '48. (You can peruse these spirited, exciting pieces here...)

Some of that former liveliness returns in his work on the satellite Tubby title, in the early 1950s, and in a scattering of stories he drew for Little Lulu in the same decade. These 1950s stories form a fascinating bridge from his pre-Lulu work to his important 1960s auteur efforts, especially Thirteen Going on Eighteen, which contains his finest mature work as a cartoonist.

I believe I've uncovered all of John Stanley's 1940s work for Western Publications (save for five or six New Funnies issues yet to surface). A more thorough examination of these stories may reveal more pieces Stanley illustrated during his on-the-job training as a comics storyteller AND artist.
_____________________________
*: I'm not convinced the cartoon of the 3/15/47 issue--viewable here--was his only published work for the magazine. File under "Awaiting Further Research." I hope to be able to do some research in the New Yorker archives, if/when I get a book going on John Stanley's life and work.
Posted by Frank M. Young at 9:52 AM