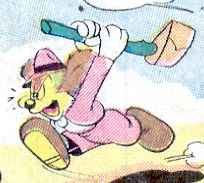 Apologies for the long absence, friends. I have been suffering from appendicitis for the last week or so. I spent four days in hospital (how I'm gonna pay for that is the $64,000 Question!), went through a lotta fever and pain, and am currently resting at home. I didn't have surgery. They elected to fill me with antibiotics and run all the bad stuff out of my system.

This seems to have worked. The antibiotics leave me queasy most of the time, and my energy level is much lower than I'd like. Things I took for granted two weeks ago now require enormous will and planning to get done.

That said, I didn't want to leave you kind folks waiting. I happened to have this story scanned and in wait for that rainy day--which is here today.

Lack of energy calls for a brief write-up today. This story is part of a small group of John Stanley post-war domestic traumas, in which the average schmo tries to attain a consumer item (suit of clothes, car, certain foodstuffs) only to find it impossible. He/she has to settle for the lousiest substitution, and attempts a cheerful facade, altho' it's painfully apparent this ersatz item is a complete failure.

Stanley did a couple of stories about the scarcity of new cars in 1947. This is unusually topical for him. As I've noted often, Stanley chose to avoid any current-events references--one reason his stories still read well today.

Stanley also wrote the "Andy Panda" and "Woody Woodpecker" stories in this issue, both of which are inspired efforts. He also wrote and drew a WW one-pager, which appeared, in one color, on the inner front cover.

This "Oswald" story smacks of "uh oh! Deadline's tomorrow!" It reflects Stanley's admitted write-as-you-go policy. No plotting, no planning--just put pencil to paper and go. This approach often gives his work a freshness and immediacy seldom found in Western's stale postwar comics. It also, as in this story, could cause narratives to peter out, despite a few moments of inspiration.

This untitled story falls squarely in that category. Stanley would quickly do a follow-up "Woody Woodpecker" story, in New Funnies #124, with the same basic set-up, but more comedic and stakes-raising oomph. 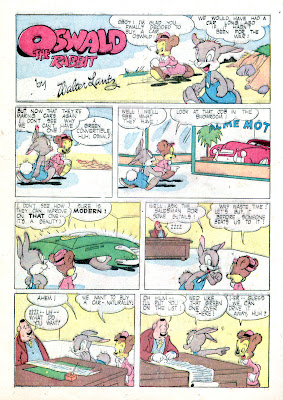 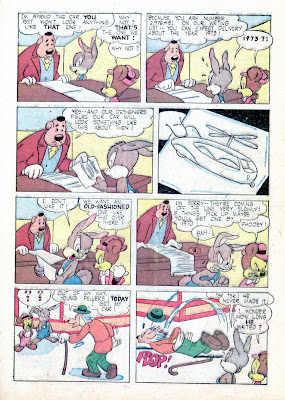 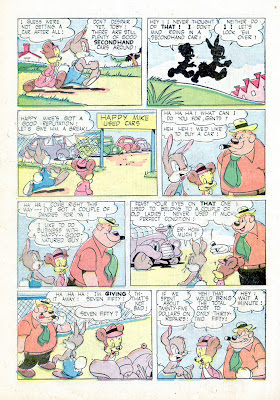 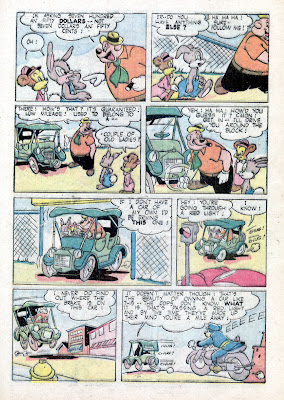 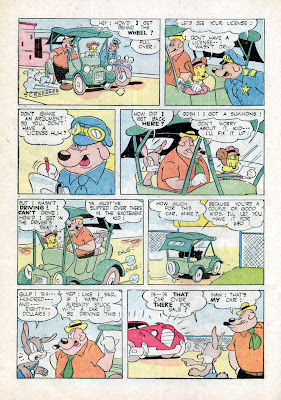 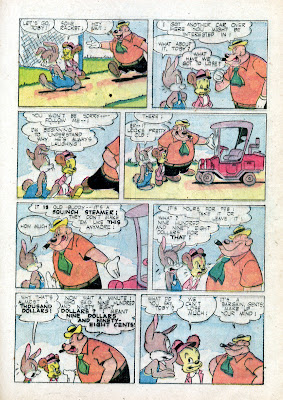 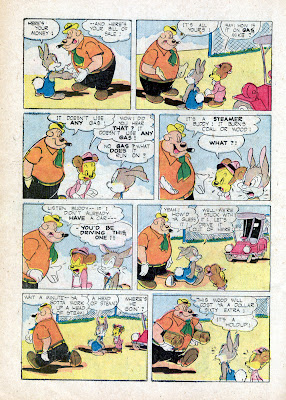 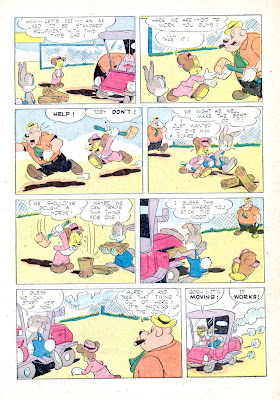 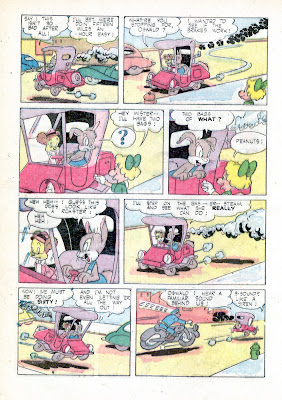 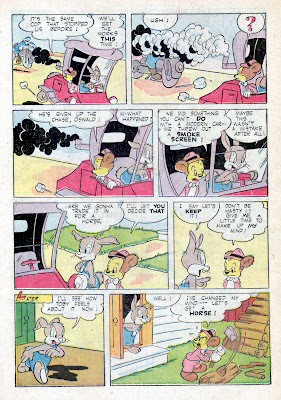 As Oswald and Toby are bland, goody-two-shoes types, they seldom have enough on the ball to carry a story. Stanley realized that the situations had to run the show. He puts some effort into Happy Mike, the used-car salesman character.

There is one transcendent moment on p.5, where a motorcycle cop stops the Squinch Steamer, formerly driven by Happy Mike, but now with a dazed Toby behind the wheel. Two panels later, Oswald also wonders how his seat got shifted around as well. This moment makes up for the general meandering of the rest of the story.

Well, that's all the commentary I have energy for today. Thanks for checking in, and may yours be good health!
Posted by Frank M. Young at 4:42 PM