From Our Gang Comics #18: Food and Fear in "Tom and Jerry" 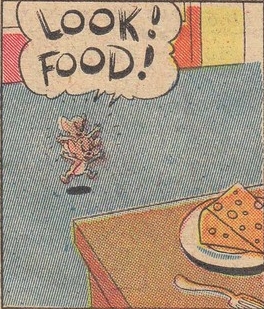 I thought I'd posted all the "Tom and Jerry" stories written (and sometimes drawn) by John Stanley. This one was still waiting rediscovery. It's a relief--I am seriously low on new material to post, after three years and over 200 posts.

This isn't the post I wanted it to be. While I've been recovering from appendicitis, I've viewed the first seasons of writer-director Nat Hiken's two brilliant early TV sitcoms, Sgt. Bilko and Car 54, Where Are You? Dozens of times, I was struck by the similarities of Hiken's and John Stanley's work. They truly seem to come from the same comedic channel.

To do this post idea justice, I'll have to prepare several video excerpts from these two programs. The first seasons of both programs are readily available on legitimate DVDs. Those curious to explore this territory on their own are directed to those DVD releases, which are available from Netflix, I believe.

For now, here's another example of Stanley's low-key, high-stakes sitcomics via this obscure, rushed-looking entry in the "Tom and Jerry" series.

This particular issue of Our Gang Comics, with a cover date of July-August 1945, is from the late doldrums of World War II. Like several Dell titles of the era, this one was suddenly conflated to 36 pages from the usual 52. Existing stories were crudely re-formatted to fit on less pages.

This story appears to have been created for the more cramped page-count. Its artwork is particularly slap-dash. Traces of Stanley's layout drawings peep through here and there. The artist's energetic, loose brush-based style brings much energy to the pages. (It looks like it may be Otto Feuer doing these chores--what do you think, Thad K?)

Despite some reckless rendering that betrays the story's hasty production, its five pages of crowded, claustrophobic panels are full of Stanley's trenchant wit. Its theme of hunger and the existential search for food is a common Stanley subject. 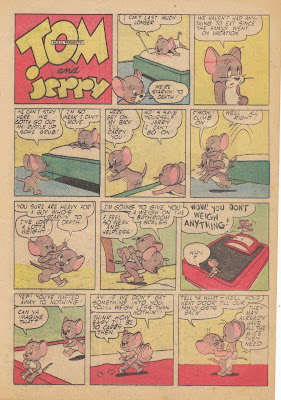 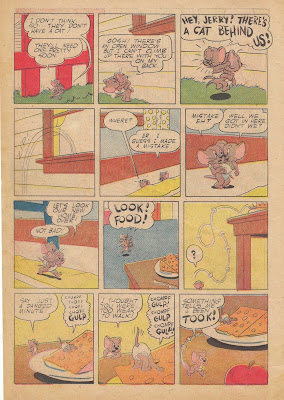 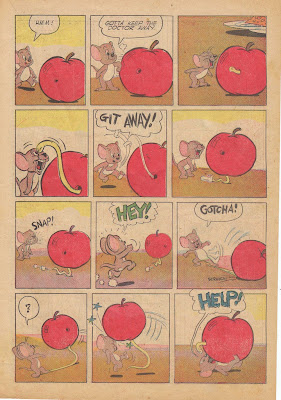 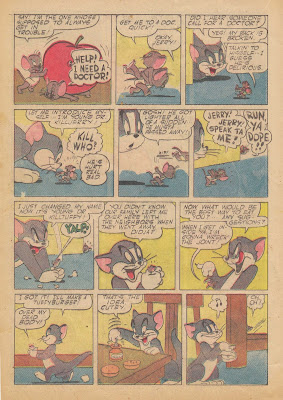 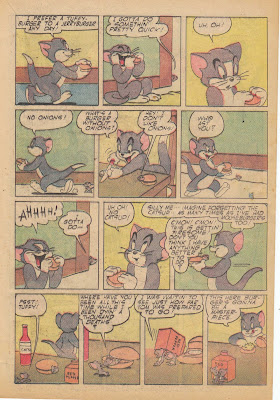 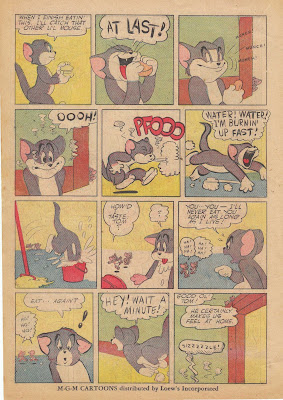 There's a lot of chit-chat in this story. Stanley's rapid-fire banter is the saving grace of this minor episode. As is typical of this series, Stanley is more interested in the relationship of Jerry and Tuffy, the mice, and only brings Tom Cat in when it's time to raise the narrative stakes.

The Tubby-like attitude of Tom is particularly noticeable in this story. Tom's self-congratulatory chatter is genuinely amusing. He's not the cardboard villain of the MGM theatrical cartoons. He is a grade-A asshole, but his deluded high state of self-regard redeems him.

The interactions of Jerry and Tuffy, in the story's first three pages, are typically sharp. This verbal tennis would serve Stanley well in his later Little Lulu stories and, particularly, in the masterful writing of Thirteen Going on Eighteen in the 1960s.

The story peters out peculiarly in its last tier. That final panel is an enigma. I have no idea what's going on, or what the import of it is. Perhaps I'm just missing something.

Admirers of Stanley's pet phrases will enjoy the multiple CHOFFs and CHOMPFs that grace page two. The search for food quickly turns dangerous in Stanley's 1940s stories. Those in need of nourishment may become another character's entree or appetizer.

Though the back-and-forth dialogue of the two mice is deft and amusing, a certain grimness lays just beneath its surface. As in Stanley's later 1940s series, "Jigger and Mooch," the outsider characters (the mice) must go through a lot of trouble to keep alive and fed.

Stanley would refine this concept in Little Lulu, via the frequent hunger (and soliloquies on this state) of Tubby Tompkins. Tubby's broad character helps leaven the fear-factor of hunger considerably. We never worry that Tub will starve. In one of Stanley's greatest stories, "The Gourmet," Tubby shows his mastery of hunger, and his ability to manipulate adults.

Stanley's mice lead a much less secure existence. It makes them compelling characters, but the sadness of their plight always hangs in the air around them.
Posted by Frank M. Young at 7:31 PM

I've got a feeling it's a bowdlerized story or, at least, mutilated by the editor.
That might explain the particular non-sense of the last page. Certainly, various artists work on that very one. Suddenly, art becomes rough and clumsy and there's even a different inking for panels 5, 6 and 10. It provided me a good reading experience, although I'd go as far as to say it's just for Stanley fans.

Changing the frequency to "The most important things in Life":
I haven't a clue you had an attack of appendicitis! Hope you get well soon. Your health is important for the community!

hi Gabriel... always nice to hear from you!
Yes, the artwork of this story is a mess. There is a certain sloppiness to Stanley's work during the World War Two period. He was still developing as a story-teller...
Thank you for your kind comments concerning my health. I'm recovering, and hope to be doing better soon. Working on the Carter Family graphic novel now--life is just a big coloring book!