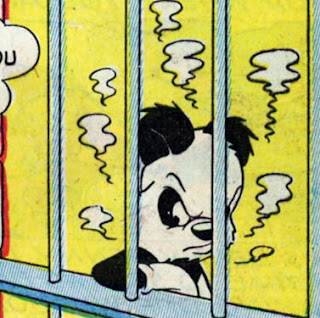 Praise be unto the anonymous scanners who post entire issues of old funny-books online. Via their tireless efforts, we can actually read vintage comics, and regard them not as investments, to be sealed in a lucite cube, but as examples of American mass-media.

Here's an early New Funnies issue I've been searching for, free of charge, thanks to the kindness of "Sooth." These early 1944 efforts show us John Stanley still working out how to do comic book stories.  The results are hit or miss, but his hand is quite evident--especially in the first story.

Before that, a moment of time-worn patriotism: 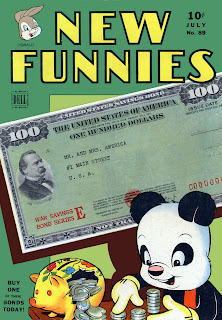 Andy appears eager to obtain one of those war bonds! Does he have $100.00 in that piggy bank? We'll never know...

Stanley's cartooning enlivens this scrappy "Andy Panda" story. It proceeds, as do many of Stanley's early efforts, in a Carl Barks-ian fashion. The narrative stakes, as in Barks' early "Donald Duck" short stories, hang on the protagonist's ability to keep a promise or meet a clearly defined goal.

With his remarkable 1945 "Oswald the Rabbit" one-shot (found HERE and HERE), Stanley made his first foray into higher narrative stakes. Those two stories were a major step forward for John Stanley.

The stakes here are much lower. Again, as with the early Barks, 1944 Stanley stories stick close to the ground, and take place in a recognizable, habitable everyday world. 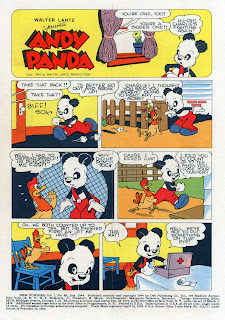 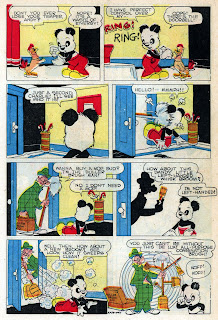 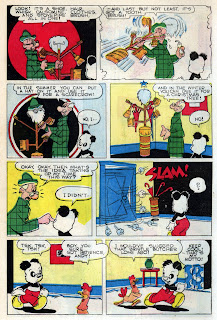 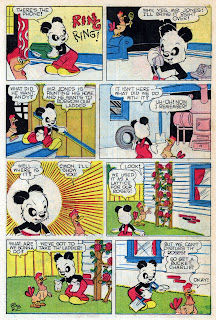 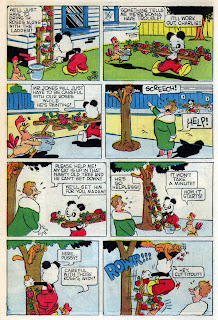 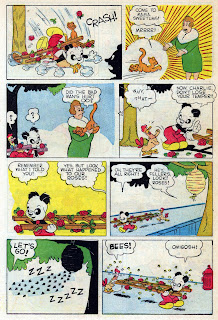 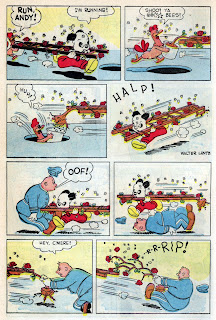 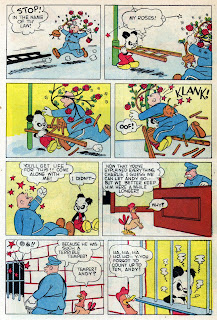 Stanley uses the time-honored ODTAA (One Damned Thing After Another) formula, in which the hero undergoes a pummeling series of frustrations. These take him from normalcy to anti-social isolation. This schematic was a mainstay of Barks' work, right to his career's end.
Stanley soon moved beyond this scenario, given his interest in richer characterizations and higher stakes. In this story, Andy and Charlie Chicken also swap status roles. Charlie is the anti-social rowdy at story's start. Andy, driven by his attempts to set a good example, despite overwhelming odds, ends up fuming behind bars, while his loose-cannon companion enjoys unfettered freedom.
This status swap would inform many of Stanley's classic "Little Lulu" and "Tubby" stories.
Stanley's cartooning is over-wrought in this early effort. His style would become one of under-statement and economy. The background details of the first few pages take our attention frequently away from the actions of the protagonist and antagonists. By story's end, Stanley uses simpler, more diagrammatic images.
The human figures in Stanley's early stories have a distinct look. The cat lady in this story is seen in many iterations, including the female adults in the earliest Little Lulu stories. These highly stylized humans are another reliable Stanley art "tell."
Notice the odd "Walter Lantz" signature on p.7, panel 4. What was up with that? It's worth noting that the signature appears in a panel in which Lantz's character runs in pain and terror.
Less refined is this issue's "Woody Woodpecker" story. Most certainly not drawn by Stanley, it shows little care or concern. Stanley's next "Woody" story would inaugurate a series of strong, high-stakes narratives in this series that would last through 1947.
Here, Woody is just an anti-social pest, dropped into a rustic situation where he encounters adversity and humiliation. He never eschews his gadfly status, bless his psychotic li'l heart! 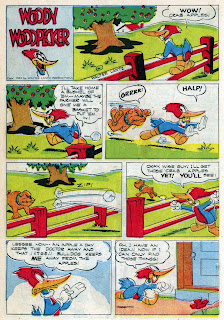 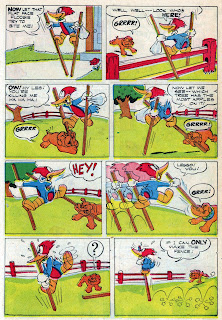 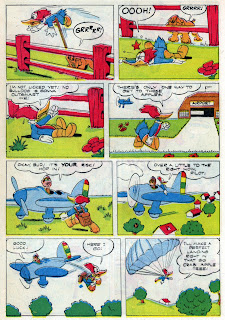 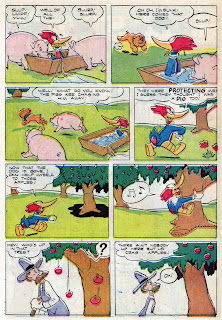 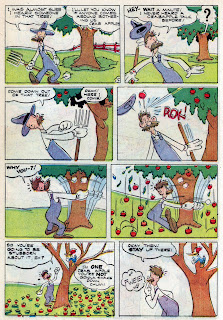 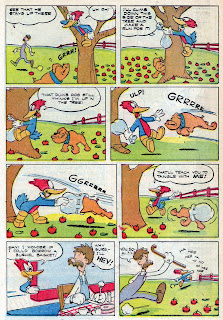 As in Stanley's first Woody story (seen HERE), the world is very much against the woodpecker from panel one. He wants something that's not acceptable, or negotiable, to the world around him. Woody is a true "Tubby Type"-- see his self-justifying babble on p.1, panel 6. In his eyes, anything he thinks or does is A-OK. It's the failing of the world around him that it can't buy in to his desires.

This sounds exactly like Larry David's persona on Curb Your Enthusiasm. As I wrote in this somewhat controversial post, there is a direct link from Stanley's comics work to the recent trend of humiliation comedy on TV.

Even in his least significant stories--of which this is certainly is--Stanley's intelligence and comedic sense are evident. To read John Stanley's 1940s stories, with knowledge of what he would do in the '50s and '60s, is enlightening.
Posted by Frank M. Young at 10:25 AM

Dunno why that linked post would be "controversial"... I just read it for the first time and thought it was excellent. My dad has DVRed the newest Curbs for me, and I can't wait to see what Larry David is up to now. NBC Thursday, on the other hand, will be scary this Fall. There's a strong likelihood I might make a habit of not watching The Office, which disappoints me greatly. Thankfully 30 Rock is still a riot, and succeeds at being an animated cartoon better than 99% of animated cartoons made in the last half century have... which is actually depressing in itself, I guess.

I wonder if you received my spiel about the similarities between Stanley and Preston Sturges? I understand if it slipped past you because of your hospital visits.

Thanks for your comments. I got some off-site flak about the piece from some less appreciative readers.

I, too, dread the rudderless new season of The Office. But there is still 30 Rock and the under-rated Parks and Recreation to look forward to.

I agree with your assessment of 30 Rock. It is Frank Tashlin's wet dream.

I missed the Sturges/Stanley piece. I'll backtrack and read it.