A Couple of Woodies For You: proto-Little Lulu items from New Funnies, 1945 The above detail is from the cover to New Funnies 97, which isn't featured here today. The focus is on a pair of early "Woody Woodpecker" stories that remarkably anticipate the themes of John Stanley's classic Little Lulu narratives--in both story and art.
Stanley's version of Woody Woodpecker is the gateway to his single finest characterization: Tubby Tompkins, from Lulu. This comparison has been noted, in depth, already in this blog.
Today's first story, from New Funnies 96, has strong ties to the classic Little Lulu era. The use of snowball fights as a comedic status war is common in Lulu. Stories such as "The Big Snow Fight" (Four-Color 139, 1947), "The Snowball War" (LL 9, 1949) and "Prisoner of War" (LL 66, 1953), to choose just three, show Stanley's clever, vivid use of this childhood aggression-play as a ground zero of narrative stakes-raising.
Woody fights solo against "the South Side Gang," a cut-throat mob of dog-kids. Unlike Tubby, the woodpecker is a disenfranchised loner, and no mercy is accorded him at any point. 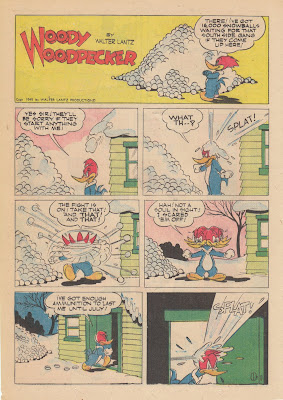 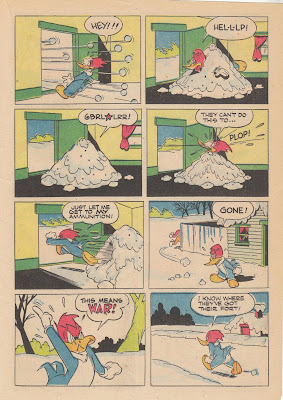 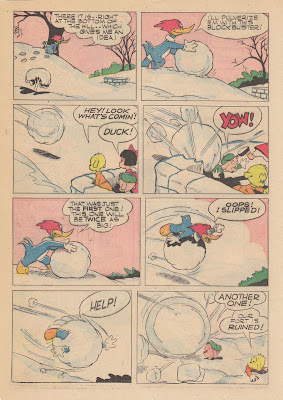 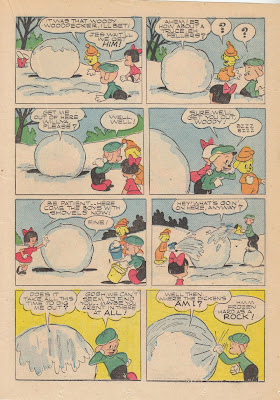 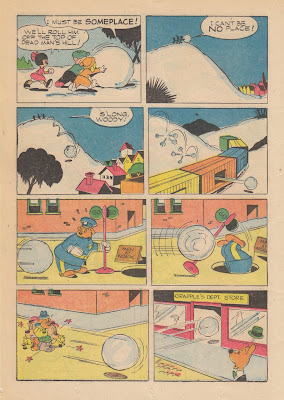 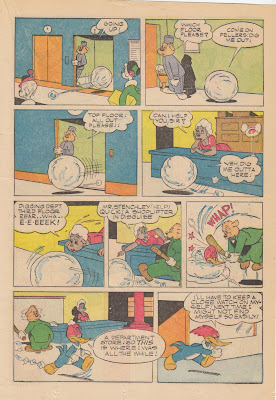 The theater-of-cruelty that would inform Stanley's Thirteen Going on Eighteen is evident here. Before Woody can perform his two acts of aggression, he has been repaid tenfold by the cute-yet-vicious humanoid tots.

After those two incidents, the South Side Gang literally attempts to seal his fate. They freeze him inside a snowball, then shove him downhill to his intended doom.
Woody's soliloquy, while the kids send him rolling, is almost chilling. "I must be SOMEPLACE... I can't be NO PLACE!"
Woody, in Stanley's hands, is forever "no place." Try as he may, he never fits into the world around him. He puts up a good fight, but the universe dishes out indifference all the same. Tubby never suffered anything remotely as bad--even in the clutches of the feared West Side guys!
Our second story, from New Funnies 104, is written and drawn by Stanley, in the style of his earliest Little Lulu stories. This story, cover-dated October, 1945, was drawn shortly after the first Lulu one-shot. Unlike the debut Lulu, which is crisply inked in pen, this story is finished with a brush. It gives the artwork a softer feel, and its style is obviously infected by the Marge Buell look.
It's worth comparing that first Lulu (there are two stories from that debut issue elsewhere on this blog) with this and other 1945-46 "Woody" stories drawn by Stanley. (Yep, you guessed it--many of those stories are also found deep inside Stanley Stories.)
Trainspotters will note an early instance of "ZAZ," plus moments of windmill action, a Charlie Chicken clone, one "YALP!" and a large, plump "YOW," as the 'pecker attempts to be helpful down on the farm. (Spoiler alert: he fails.) 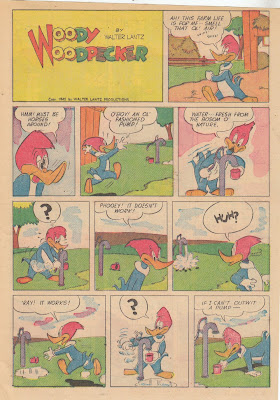 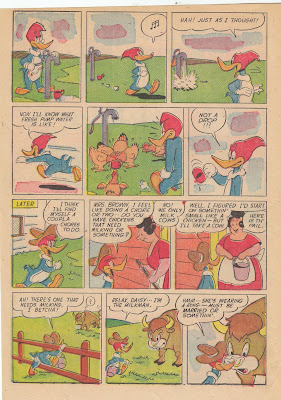 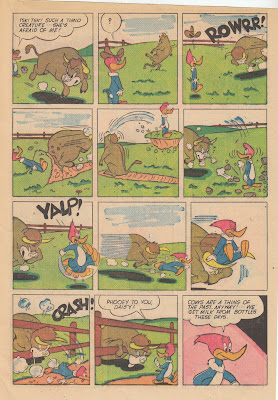 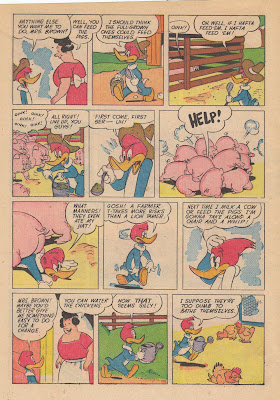 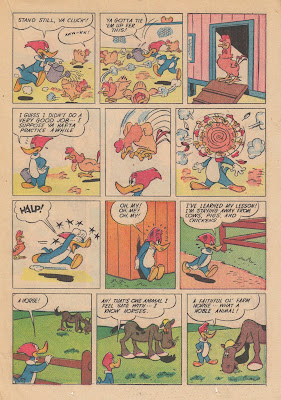 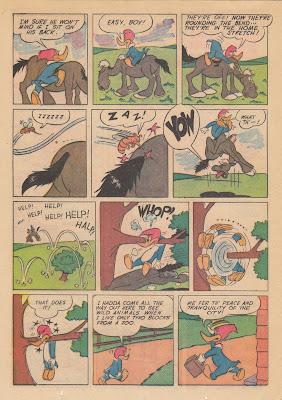 Once again, the Thirteen-esque ballet of cruelty runs the show. Woody wants to please, to conform to normal routines. But he can't; no matter how carefully prepared, no matter how alert of conscious of his surroundings, objects living and inanimate are set to do him in.
For once, Woody is not an a-hole, and is genuinely sympathetic. The painful, humiliating battery he endures is, like some of Val's more awkward moments in Thirteen, almost too much. Stanley trafficked in such knockabout comedy, for his entire career, but he sometimes didn't know when to turn it off. But it takes someone going too far to know, indeed, how far "too far" really is.
At his best, Stanley pushed the boundaries of "too far" daringly, and endowed formulaic stories with a bracing comedic zest. This gives his stories an edge which makes them still relevant and funny.
Posted by Frank M. Young at 12:05 PM