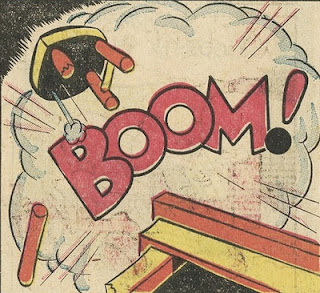 Thanks, once again, to that dauntless digital scanner known as "sooth." He/she has provided another early piece of the John Stanley puzzle.

I believe I have all of John Stanley's published comics work now, thanks to Michael Barrier's kind scanning of three remaining issues of New Funnies that were missing.

Back to our scheduled broadcast...

Another early New Funnies issue = another snappy, high-spirited romp from the learning-curve days of John Stanley's comics career. Stanley appears to have cartooned this story, which teems with his tell-tale character designs, poses and, most vividly, his distinctive lettering. 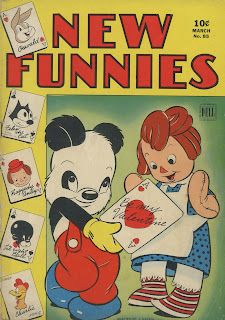 This ultra-cutesy cover kinda gives me the bends, but it, too, appears to be from Stanley's hand.

And now, onto our main feature... 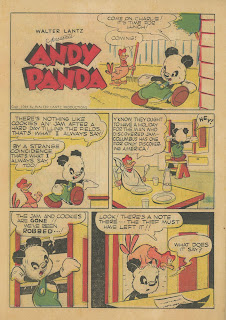 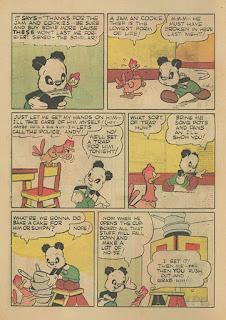 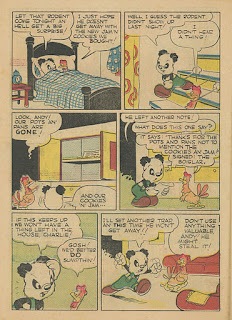 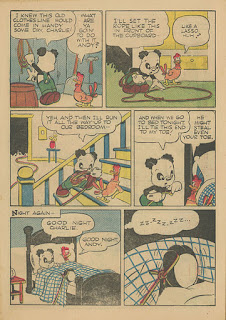 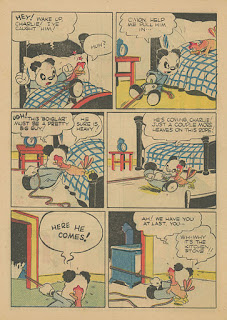 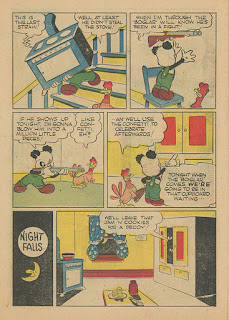 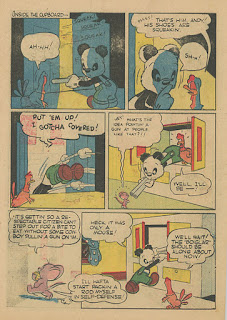 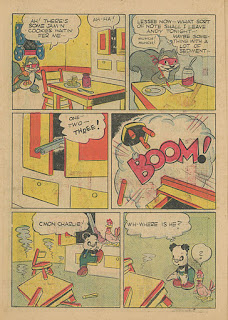 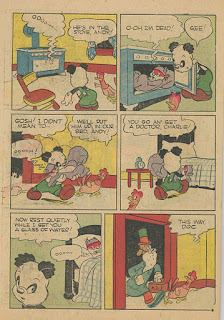 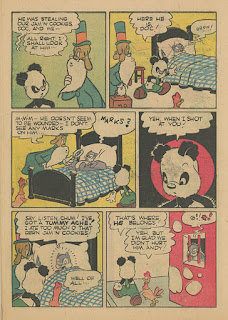 This story seems to be a sequel (or re-think) of the "Panda" piece from two issues earlier. This story has a sounder narrative shell, but exists only as a set-up for pratfalls, mishaps and as a laboratory for Stanley's development of the "Tubby Type" (or "ASS"-- Aggressive/Alienated Status Seeker).

Like the early 10-page "Donald Duck" stories of Carl Barks, this chooses to stay close to home. The first panel has an exterior scene. From then on, it's INTERIOR: BUNGALOW. This seems to help Stanley-the-cartoonist. He keeps his figures and set-ups simple and clear.

Charlie's emergent cowardice, and the a-hole personality of "Th' Boiglar" squirrel, are the most noteworthy aspects of this early effort. His comic book swearing in the last panel gives this story a final belly-laugh.
Note the p. 7 walk-on by what appears to be Jerry from the "Tom and Jerry" series at Our Gang Comics. I'm certain he was not paid for this un-billed guest appearance.

Chaser: a one-page "Woody Woodpecker" gag page also written/drawn by Stanley. I'm curious if there is a similar page in the previous issue. (The Overstreet comics price guide says no, but it's full of wrong information on lesser-known comics, so the jury's still out.) Woody's series inaugurated with this unforgettable story in New Funnies 86. 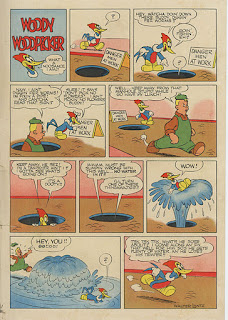 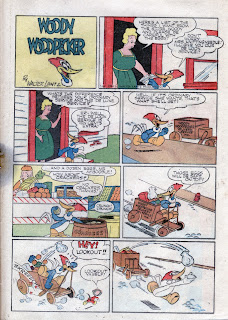 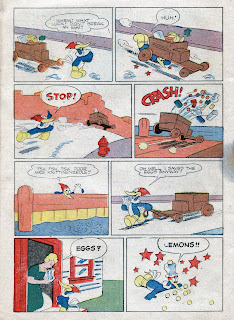 Both pieces are nice examples of John Stanley's vivid 1940s cartooning style. Nothing great was intended, or expected of them.

Stanley's love of filling a panel with humorous information--a staple of his finest work on Little Lulu, Tubby and his 1960s series--is evident in the fifth panel. Woody's visits to the cracker barrel are frequent, from the irritation shown by grocer McBooble. The grocer's irked resignation, and Woody's blatant abuse of their relationship, provide a small moment of brilliance.