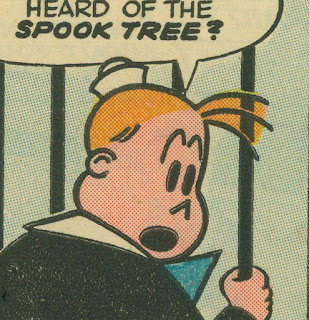 Apologies for the lack of postings here lately. In part, it's because I'm busy promoting one graphic novel and, with my friend and collaborator David Lasky, trying to finish the other, much bigger one.
As well, it's getting harder to find new material of interest, without resorting to the obvious. But resort I shall, today.

I'm sure many Stanley Stories followers have a modicum of patience for the more obscure material I present here. What the people want is more Little Lulu. Although her complete works have been reprinted, Lulu's pre-1955 stories have yet to be presented in accurate color versions. Like Harvey Kurtzman's self-drawn stories for EC Comics, Stanley and Irving Tripp's Lulu needs color to be complete.

I was recently gifted with super-hi-rez scans of "The Spook Tree," which is among the best of John Stanley's many stories with supernatural themes. Since it's Halloween and all (and since I've exhausted the available stores of horror-themed Stanley comix), it's time to put this one on display.

To read this story in color--even crappy high-speed press Dell Comics color--is preferable to seeing it in brutal black and white. 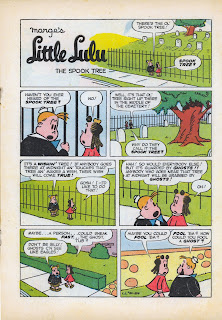 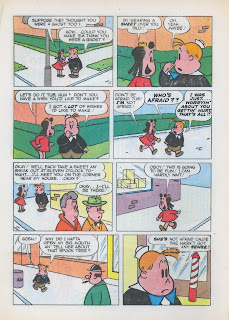 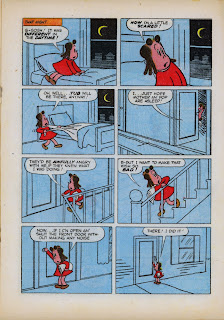 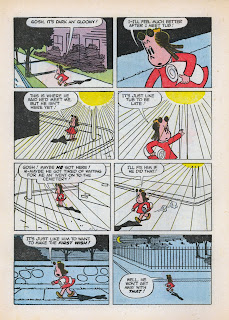 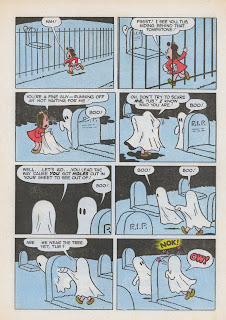 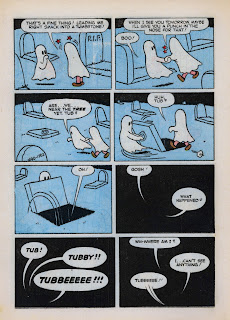 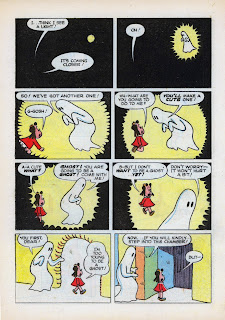 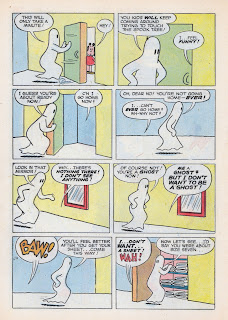 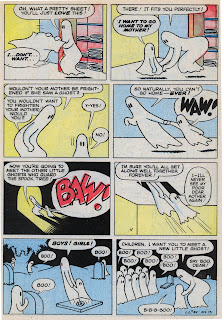 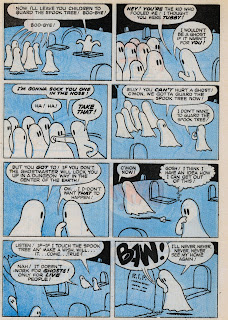 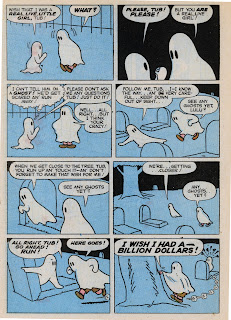 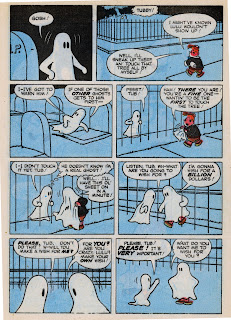 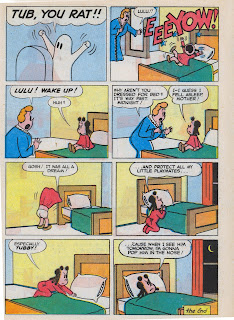 "The Spook Tree" is the rare Stanley supernatural piece that doesn't try to blur the boundaries of consciousness. Unlike "The Guest in the Ghost Hotel" or the untitled "Li'l Eight Ball" story from New Funnies #101, "Spook Tree" is, like one of Lulu's on-the-fly fairy tales, framed and contained.

Lulu's dream reflects her own social biases--that Tubby thinks only of himself, and that he patronizes Lulu, whom he thinks "hasn't got any sense." It includes a great deal of personal anguish. Twice, Lulu emits the wail of the lost and disconnected in John Stanley's world: 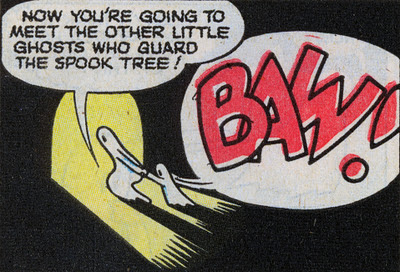 BAW! is the anti-YOW! These three-letter words convey the polarity of experiences in John Stanley's world. YOW can connote joy, anger, fear, surprise, irony, and other emotions. BAW is the banshee call when all is lost.

Both words were an established part of comics' vocabulary before Stanley used them. In his stories--particularly the Little Lulu pieces of the 1950s--these two simple words are the ultimate signifiers of his characters' well-being (or lack of same).

Stanley's most affecting use of BAW is in that "Li'l Eight-Ball" story from 1945:

As I commented in 2009, this is one of the most forlorn tiers in comic-book history. In the context of the story, it imbues the stereotyped Eight-Ball with raw, real feelings of sorrow. Due to the racial stereotyping, it's an awkward moment, viewed in a 21st-century perspective. But intense vibes of sadness come from these two panels.

The coloring of "The Spook Tree" is as harsh and flat as Lulu's self-fulfilling dream-fate. Earlier issues of LL with night scenes chose a softer, more atmospheric palette, as in this excerpt from issue #26: 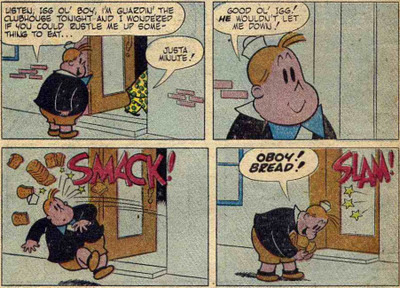 The starker affect of the colors in "Spook Tree," whether intentional or not, support the jarring, edgy turns of the narrative.

Page Four uses a linear technique unique to this story. In panels three to six, radial black lines, with a yellow undercoat on plain pulp paper suggest the disorienting harshness of a street lamp on a dark night. The lines, connected to a sun-like disc of yellow, have a condemning quality.

As with most of her made-up fables, this fantasia seems self-punishing. In her waking state, Lulu is a sort-of authority figure. She accepts a great deal of responsibility, and enforces a kind of playground jurisdiction with her friends. She is called on to keep Tubby and Alvin in line (often by their parents) and speaks up when she sees them misbehave.

With the aid of her friend Annie, she often thwarts Tubby's elaborate schemes. In landmark stories such as "Five Little Babies" (LL #38), she subjects Tub and his clubhouse pals to epic public humiliation. Perhaps her role as victim, cast-out and put-upon, in her self-spun stories, are her tacit way of balancing her wheel of kiddie karma.


Little Lulu, though rooted in a recognizable, workaday reality, often excurses into the supernatural. Many of these instances occur in Lulu's improvised stories, or in her dreams (see "The Throw Rug", in issue #64, for another striking variant of this theme). "Haunted houses" recur in both dream and non-dream stories, with the children's imagination (and willingness to be scared) the crux of most instances.

Just beneath the benign surface of Little Lulu is the message that the world is a potentially frightening, harmful place. This notion, because it is real, carries more weight than the ghosts, goblins or spooks of Stanley's harmless fantasy sequences. This sense informs all of Stanley's work, and becomes more pronounced--and almost unbearable--in his Nancy and Melvin Monster stories.

The balance of light and dark is pitch-perfect in the Lulu stories of 1950-1955. It's easy to take these stories for granted. They lack flaws, and never rustle the reader's suspension of disbelief. By peeking under their entertaining surface, we see how complex these stories really are--and why they remain as potent in 2011 as they were in 1951--the year "The Spook Tree" was first published.


<><><>
SPECIAL THANKS to Thomas H. Buchanan, who tipped me off on how to disable Blogger's lightbox display. Now you can view the pages of each story without that annoying hassle. If you have a blog on this system, and are bugged by the lightbox, here's all you need to do.

In Dashboard mode, choose the 'Settings' tab. Then choose the 'Formatting' sub-tab. On the list of options in Formatting, change the lightbox setting to 'no'.

The last page of this story doesn't expand. Is there any way to get that page to open up?

I fixed it. I've noticed that, sometimes, the last image in a blog post has this non-expansive problem.

Thank you for your kind words, Thomas! I enjoy your blog, too, and as you know, it takes some devotion to keep these things going.

Most of the time, I don't get any feedback from the world about what I post here. I'm not asking for a pat on the head--just saying that it's nice to have you recognize my efforts.