"Send Me To The Electric Chair!": "Woody Woodpecker" from New Funnies 88, 1944: story and some art by John Stanley 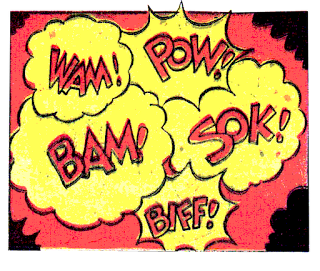 Thanks, once again, to the kindness of comics and animation historian nonpareil Michael Barrier, I'm able to share with you another rare early Stanley story.

This is the second of his "Woody Woodpecker" stories. The first one, which appeared two issues earlier, can be found, in all its un-PC glory, here.

Woody was slow to appear in the pages of New Funnies--rather like Daffy Duck in the Looney Tunes and Merrie Melodies comic book produced for Dell in California. In several pre-Stanley issues, the woodpecker makes cameo stopovers in  otherwise namby-pamby, cuddly-wuddly, icky-poo stories.

In these tentative first appearances, Woody is nutty in a gormless way, and his lunacy is much gentler than his early animated persona. He is very clearly a puzzle to the unimaginative, bland creators of the pre-Stanley original material.

Western's editors seemed initially shy about these screwball, anarchic characters. Perhaps they thought their reckless antics would have a negative influence on young readers.


From the start of his New Funnies tenure, Stanley did his best to enliven the "Andy Panda" feature. By and large, he succeeded, by giving Andy a screwball soulmate in his original creation, Charlie Chicken.

Woody warmed  up to New Funnies via a few short pieces before his official launch with issue 86. After that story (one of Stanley's strongest early efforts), the next issue made him use the service entrance, and he was allotted two meager pages.

The story you're about to read, while no masterpiece, truly launches the series. The series' logo, which would be used long after Stanley's 1947 departure from New Funnies,  first appears here. This logo was drawn by Stanley. Those spiky angles on the W are unmistakably his handiwork. He penciled and lettered this story. His drawing style occasionally peeks out beneath uninspired ink finishes by I-know-not-who.

In this story are the first instances of vital John Stanley chess pieces: bratty kids, truant officers, school teachers and the police. Via Woody's self-assured, sublimely deluded character, we also see one of the earliest iterations of what I call "the Tubby type." 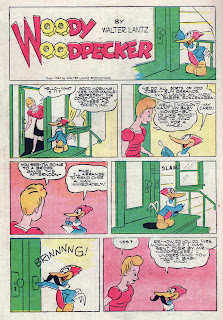 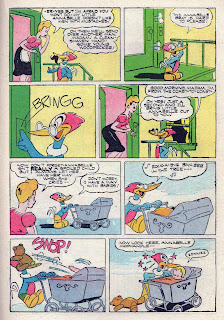 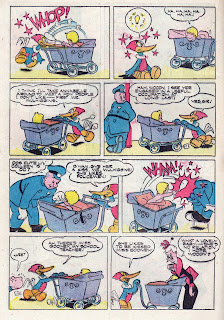 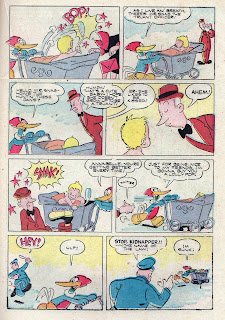 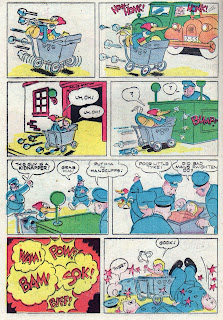 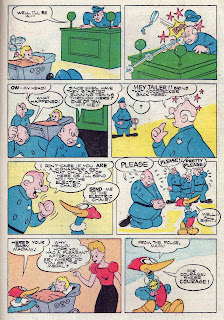 Stanley loads much hardcore knockabout comedy into this six-page story. Various authority figures receive the harshest treatment. The sociopathic infant, Annabelle, proves formidable enough to bring the cops to their knees, on the last page. They tearfully beg Woody to remove the little psycho, and give him a medal--a huge statement from these scions of authority and structure.

Woody seems smarter and more cheerful in his earliest Stanley-created stories. He becomes an outcast, loner and comix noir figure from 1945 on. In those stories, he is the one on the bad end of mistreatment. Here, like Stanley's version of Tubby Tompkins, he's much more a part of the world around him, despite his penchant for chaos.

I believe that p.3, panel two is the first instance of Stanley's endemic "Ha, Ha, Ha." Second only to "YOW!" as a Stanley signifier, it is among the strongest guarantees of his authorship. "YOW!" was liberally adopted by other Western Publications creators, and is not a reliable barometer of Stanley's involvement in non-Little Lulu stories published between 1950 and 1959.

This condemning laughter is usually punctuated with exclamation points, but either version offers a harsh reality-check for its recipient. You don't want to be on its receiving end, in any case.

As with many of Stanley's first-year stories, the roots of his future, as comics' finest mainstream writer, are clearly visible. Within two years, he would realize their potential and make breakthrough after breakthrough.

Thanks for this subversive little gem! It's really interesting to see how and where his brilliant bits of personalized business gave birth. What has always impressed me most about Stanley's work (especially in these 1940s tales) is how purely cinematic it is. I've always felt that his Lulu stories were far more related to cinematic story-telling than the Paramount animated cartoons! His stories move very much in the way of movies, and this Woody tale is a great example. Keep this stuff coming!