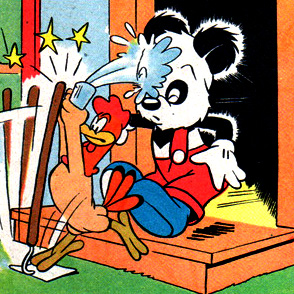 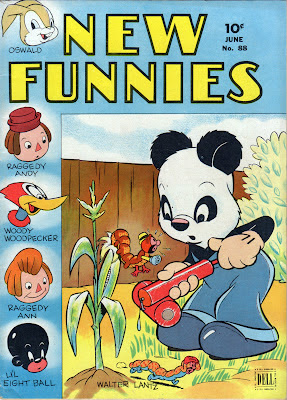 The cover to this issue offers a rare instance of an image that concretely connects to the story inside. In general, early comic book covers were event-free posters to grab the eye of the casual browser.

It was an innovative touch, especially for Western's regular comics titles. Their one-shots, more reasonably, had to mirror the innards, as those were typically book-length narratives.

Trainspotters Dept.: A few other New Funnies covers, from Stanley's run on the title, preface the inner contents. His first, for issue 79, perfectly introduces his clean-sweep debut on "Andy Panda." Issue 93's cover painfully previews the dental-themed story waiting just inside the cover. The most humorous and charming cover-mirror is issue 121's, which is available elsewhere in the vast holdings of this blog.

This is Stanley's cartooning, from stem to stern, including the hand lettering. Interesting to note that Stanley worked with every character on this cover--although he didn't touch "Raggedy Ann and Andy" until the later 1940s.

And now, today's story, which begins on the inside front cover, in a wartime paper-saving move... 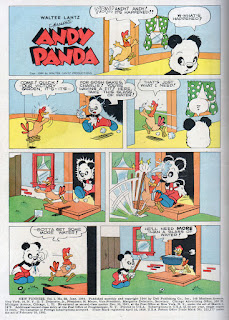 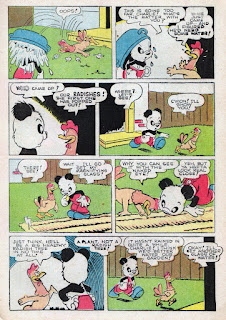 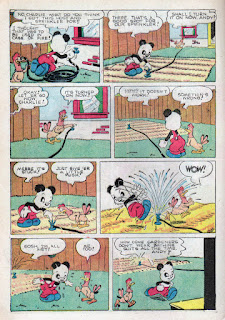 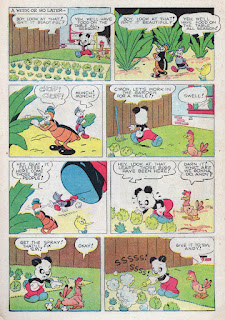 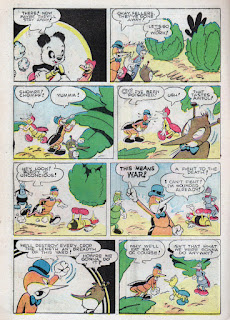 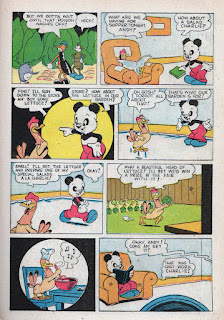 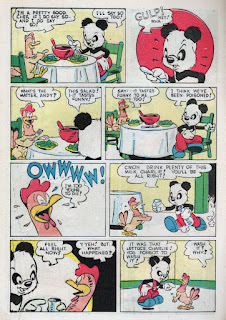 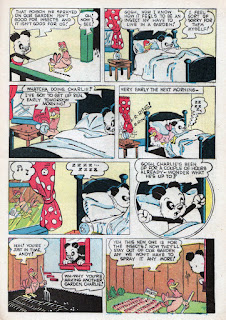 This story, along with the concurrent "Hector the Henpecked Rooster" piece in Animal Comics #9 (cover-dated June-July, 1944), introduced one of John Stanley's major tells as a writer and cartoonist--a pair of sound effects that depict the joy of consumption...

To be honest, I haven't done an inventory of all the John Stanley pieces prior to the June 1944 publishing date, so I may be wrong here. It's still a significant and simultaneous use of one of his major comics innovations. These two sounds so perfectly convey the eager act of eating. CHOFF would become the SFX mantra of Little Lulu's Tubby Tompkins... 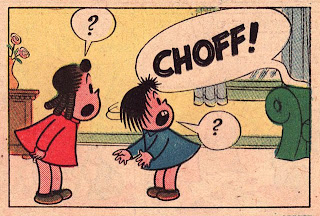 ...and move to the front of the Stanley Sound Effects queue in the early 1960s... 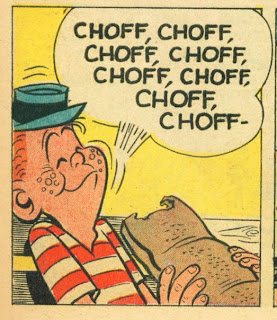 This 1944 story picks up considerable speed on its fourth page, with a clever and very funny use of repeated dialogue:

Stanley's allowance of his antagonists to mirror the thoughts and desires of his protagonists is a major narrative move. This concept will coalesce in the 1950s issues of Little Lulu. Therein, the boundary between hero and heel is often blurry, just as in everyday life.

Charlie's solution to the insect problem, after a near-fatal salad episode, also prefigures the child-logic of Little Lulu. This is the fix Lulu or Tubby might have invented to deal with this problem--just make a second garden, stick a sign marking it as for the insects--trouble begone!

This non-condescending use of child-logic is one of the prime ingredients of Stanley's Little Lulu. It's perhaps the main reason why his Lulu stories still engage young readers. They suffer, as did mid-century kids, from the supposition of adults. It's liberating to see the natural logic of children, based upon what they know of the world, change a situation for the better.

Note that Andy does not reject, mock or otherwise deep-six Charlie's naive solution. Though this event is clearly intended as a punch-line for the story, it creates a sense of resonance with the reader. Few comics aimed at kids cared to do this in 1944. In this story, Stanley hit on an essential of his storytelling style. It would take Little Lulu to cure him of a tendency to meander. By 1948, Stanley knows where he's going, and this skillful confidence pushes his work into a long period of greatness.

Stanley's crisp cartooning on the cover piece is lessened, inside the book, by another, unidentified hand. Stanley's vibrant lettering, and occasional flashes of his spiky, vivid cartoon style, peek through the mystery assistant's inks. It's sometimes painful to see Stanley's work weighted down by other hands, but it says much about his cartooning that its personality can still push through the haze.

The ending is so anti-climatic... almost as if it needed another page or two.

I think an index of Stanley's work, chronologically is needed. Have you thought of doing such a thing?

I'm sure Stanley, Barks, Kelly and other comics creators at Western often longed for one or two pages more... especially during WW2, when page counts bounced from 60 to 52 to 36, with no advance warning.

I have, in fact, compiled a chronological index of John Stanley's 1940s comic-book work. Should I publish it here? Whaddaya think?

Yes, please do! This sort of thing would be invaluable to those of us who wish to seek out more of this man's great work!