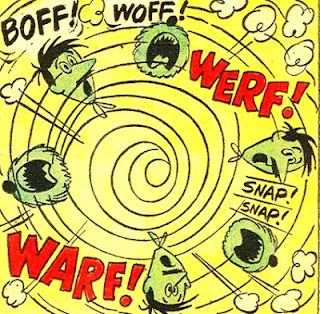 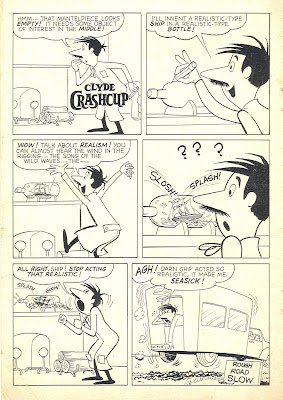 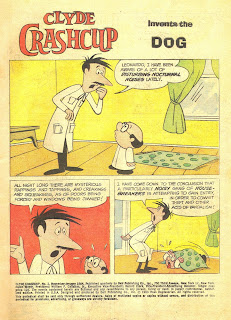 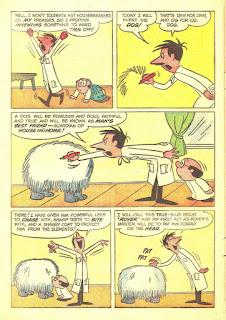 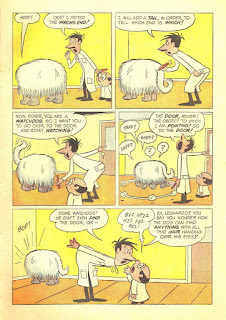 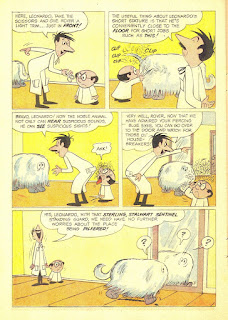 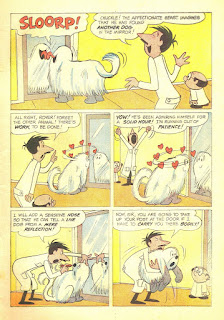 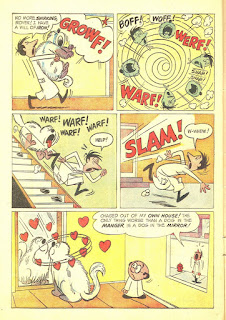 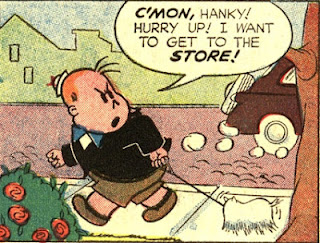 The hairy, self-loving dog in this story is a larger revision of Hanky, the dust-mop dog owned by the love of Tubby's life, Gloria, in Stanley's Little Lulu series.

This panel comes from the last issue of LL John Stanley worked on--itself the subject of one of this blog's most popular posts.

This concept came late enough in the Little Lulu run that it was, likely, fresh in Stanley's memory when he put together the Crashcup comics in 1963/4. 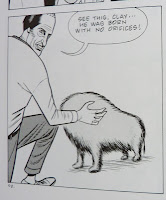 It's hard not to think of the faceless dog of Daniel Clowes' early long narrative, Like a Velvet Glove Cast in Iron, but I doubt there's any deliberate connection.

There are probably many more examples of the ultra-fluffy dog in comics. Time is fleeting, so I limit myself to these two.

Back to our regularly scheduled broadcast. Undeterred, Crashcup, er, behooves himself to conjure the camel: 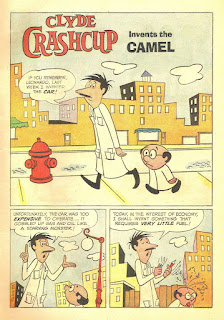 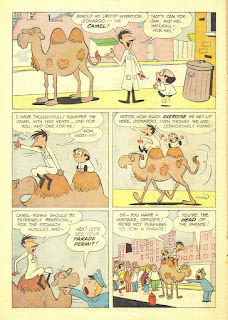 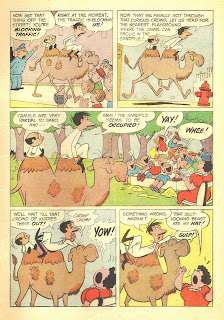 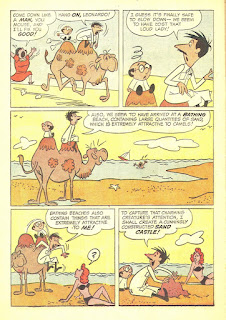 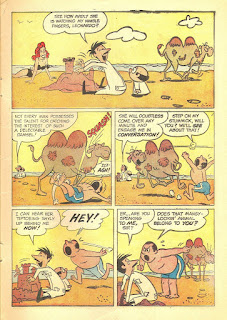 The beach is a familiar turf for social anxiety in John Stanley's world. Like the public park, it was a convenient ground zero for his characters' biases, neuroses, aggressions and passions. Tripp's unusually spirited cartooning reminds us that he was capable of more than the stiff-limbed figures of the "Little Lulu" universe.

The cynicism that often runs rampant in Stanley's later work is everywhere in Clyde Crashcup.  This element is perhaps the key that makes these stories read at a higher level than Stanley's Nancy and Sluggo, et al.

Cynicism is built-in, on a core level, in the mere concept of the Crashcup character. It's one thing for a little kid like Tubby Tompkins to daydream, and surf his cognitive biases from one whim to another. For an adult to be crippled by delusion is something deeper and darker. I doubt the creators of the Crashcup character had any of this in mind. This was Stanley's turf, and an aspect of the human condition he understood like no other comics creator, save Carl Barks.

As astute reader and animation/comix historian Thad K. observed, the ending of "Camel" is a sour take-off on that beyond-cliché Charles Atlas bodybuilding ad, seen in thousands of comic books. Parodies and references to that ad could make up a small comics anthology.

Switching from living matter to inert, our hero endeavors to dream up communications in our third and final tale... 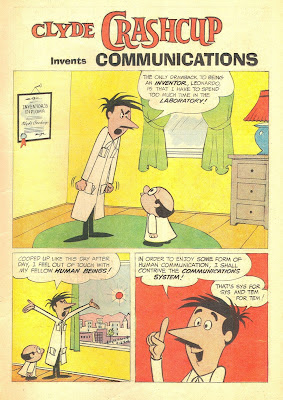 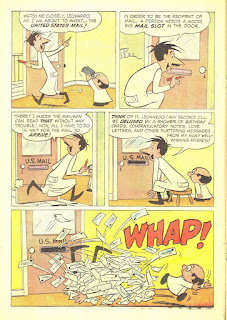 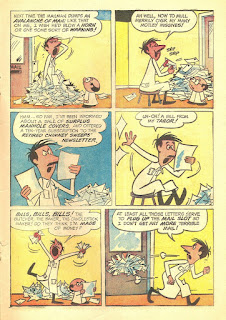 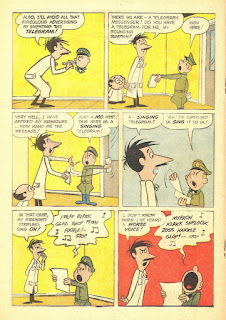 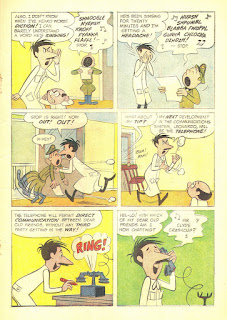 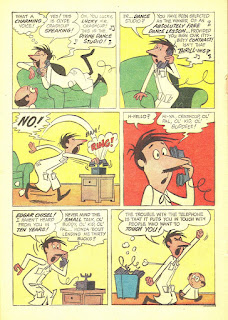 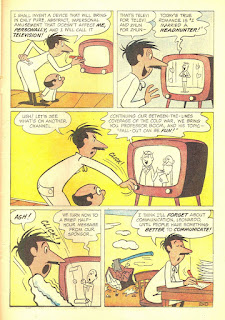 Stanley indulges in a rare moment of topical social satire in this story. The few examples of this, in his q.v., makes me wish he'd tried this tack more often. Though telegrams are a thing of antiquity (and have been for at least two decades), the intention is still grokkable and amusing.

In classic fashion, Stanley, via Crashcup, invents, considers and abolishes a parade of mass-comm formats. (What would Clyde Crashcup make of e-mail, telemarketing, infomercials or Facebook?)

The impact of mail, telegrams, telephones and TV on Clyde's life are amusingly detrimental. The garbled singing telegram strikes me as worthy of Rube Goldberg's wit.

The Crashcup series seems to have been written for an older audience, as were Kookie and Thirteen Going on Eighteen. Nowadays, a John Stanley could find a comfortable, profitable niche in creating comics for more perceptive, experienced readers. Working inside the mainstream comics mill of the early 1960s, Stanley anticipated a need for comics that gave a nod to their consumers' intelligence.

He didn't have the time or patience to really pursue this notion, but it's evident in the work itself. This is one of many aspects of John Stanley's work that keeps it current to 21st-century readers, both young and old.

A most excellent array of stories. These look like Stanley might have laid them out himself – the incidentals are a giveaway. The ending of "The Camel" is obviously Stanley's cynic take on that famous bodybuilding ad.

An identical shaggy dog appeared in a Daffy Duck and Yosemite Sam story of the period. The Fred MacMurray Disney film must have had a profound effect on someone in the editorial office at Western.

And take note, in "The Camel".. if that's not the first instance of an of-age-female's navel in a Western comic, it's among the first and most prominent.

Hi Thad...
Your comments are always perceptive, funny and welcome as can be.

I didn't notice the woman's navel! I think there are some navels shown in 1950s horror and romance comics. This would be a first in the humor genre. I wonder how that slipped by. Dell wasn't governed by the Comics Code, so they could do pretty much as they pleased.

Stanley pretty much always wrote his scripts in comics form, and the artists took those panels and based their final artwork on them. Thus, yes, his hand is quite evident in the vivid layouts of characters.

Another nice thing you noted is the cynical attitude that runs through these stories. I think I'll revise the post and make note of that (crediting you, of course, for your welcome insight)...

I always thought that CLYDE CRASHCUP was more enjoyable than anything else in THE ALVIN SHOW... and John Stanley appears to have caught the spirit of the feature as well as anyone possibly could have.