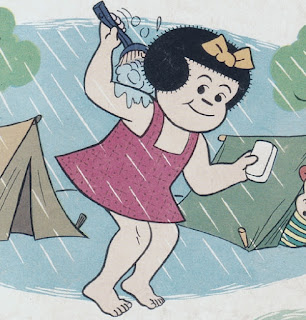 
Stanley's Nancy often reads like the comics the cranky middle-aged bachelor down the street would write, if he could be bothered. His Lulu, to the end, displays a sometimes-forced smile on its creator's face. Expectations long-established had to be met, month in, month out, on that title.

There were no such expectations for Nancy. No one had ever tried to fashion a continuing series from Ernie Bushmiller's comic-strip. Well, almost no one: Paul Terry's animation studio licensed the characters for a handful of wartime cartoons. I've never seen any of these, but would like to, if only from morbid curiosity.

More specifically, no one had tried to expand the characters beyond the containers of the daily and Sunday newspaper comic strip. Bushmiller did continuities with the strip into the 1940s, but the characters remained airtight little Buddhas--chess pieces in an unending game of sight gags.

That Stanley was able to extend Bushmiller's characters, and world, beyond the rigid barriers of the syndicated strip, is a remarkable feat. And if an anger often colors these stories, it's a righteous anger. This series was more of the same, for a man who had done the same for so long he earned the right to be sick of it.

A professional to the end, Stanley accepted the challenge with a few muted grumbles and groans, which can be read between the lines in his Nancy material. It was clearly not his heart's desire to create this stuff. A comics career in 1959 meant doing a lot of work that wasn't the creator's ideal choice. Much dreadful crap has been produced this way.

It's remarkable that this work, which by all rights should have been dreadful crap, isn't. Shrill, yes; agitated, yes. But these stories show Stanley's mind in tip-top form, as he attempts to build a better sitcom.

Here are three stories from Dell's Tip Top Comics--about which I've written here in other posts. From issue 218, first up is a particularly brassy "Nancy" story, in which Stanley's ire rises to the surface. 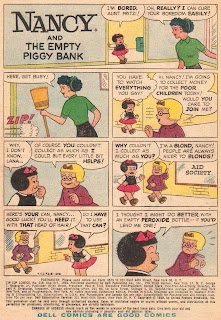 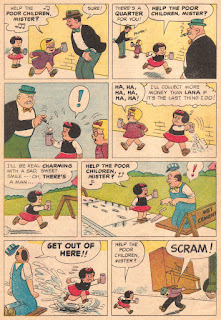 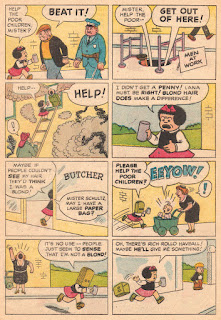 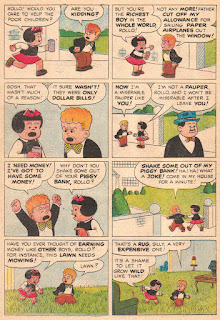 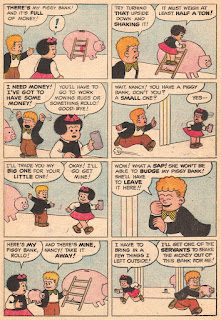 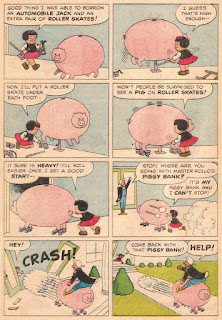 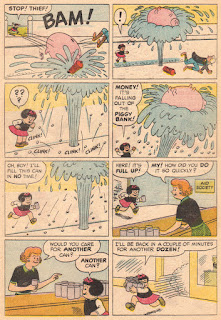 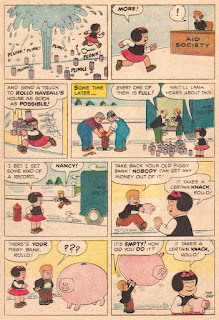 Nancy is a bulldog of a character. She wears a chip on her shoulder with apparent pride. She has aspects of Lulu and Tubby in her ad-hoc makeup. Her determination to make good, in a world that receives her with hostility, is driven by her exquisite personal pride.

Stanley builds a comedic frenzy on the second and third pages, as Nancy becomes desperate to get donation monies, and pursues it in all the wrong ways. It's unusual for a Stanley protagonist to show this kind of oblivious fervor. But, then, Sluggo isn't present.

He received his own sub-series in Tip Top, usually focused on the tense relationship with his borderline-psycho neighbor, McOnion, These stories often read like suspenseful chess matches, with opponents who admire--and despise--one another. 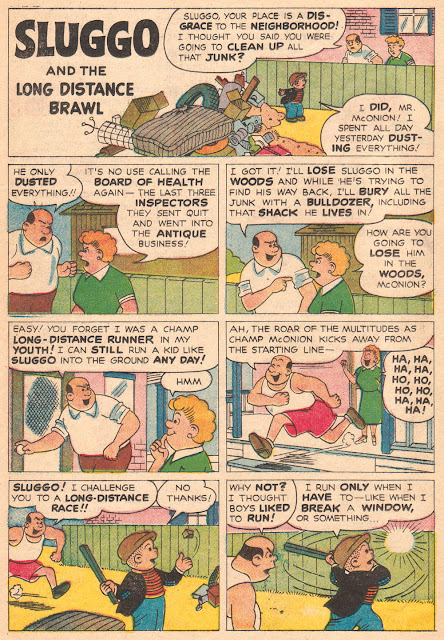 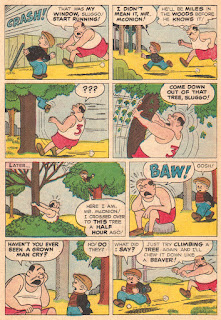 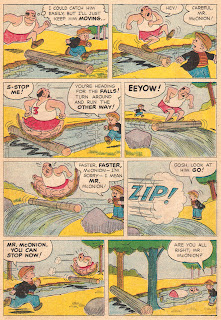 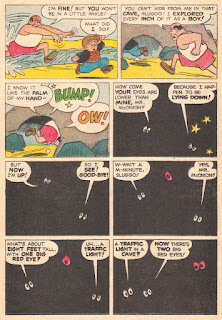 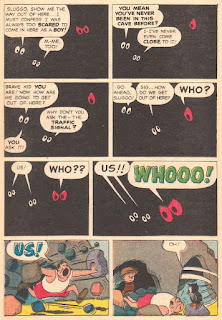 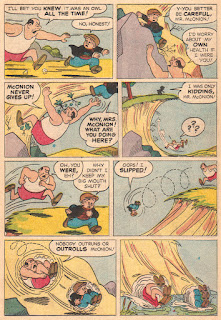 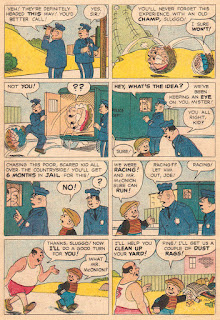 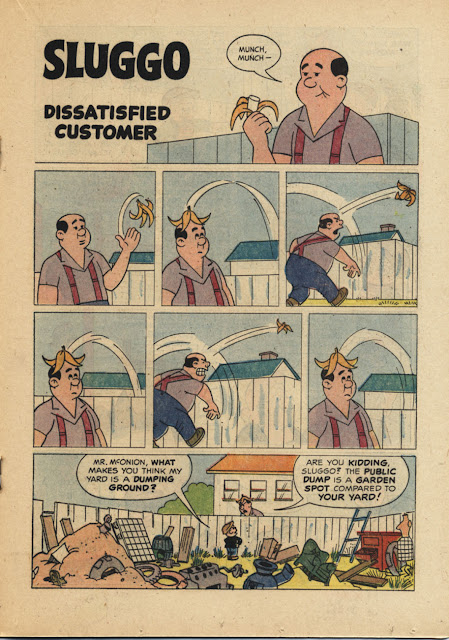 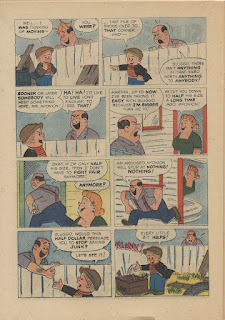 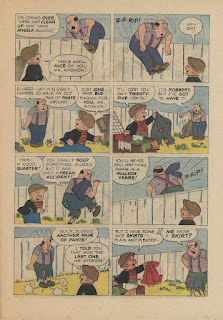 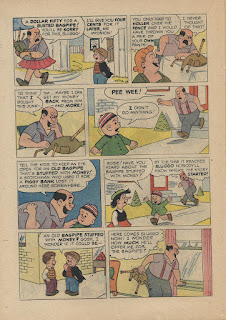 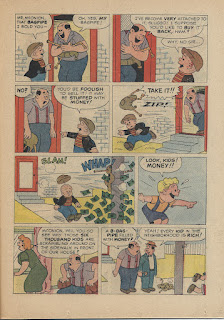 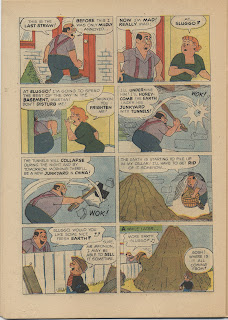 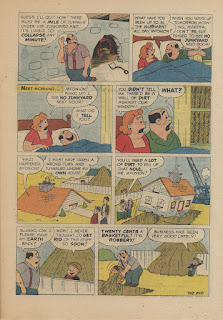 The confrontational relationship of status-seeking McOnion and pride-free Sluggo creates an edgy, slightly uncomfortable comedy. But the relationship works, and generates its own karmic energy. These encounters are, by far, the most significant and lasting of all Stanley's Nancy material.

There is no real hero, or protagonist, in these stories. Sluggo is too déclassé to care about what anyone thinks of him. He lives in a world of garbage and likes it. What could better rouse the fury of the insecure McOnion?

Yet these two polar opposites manage to co-exist. Their differences cancel each other out. McOnion has  his infinite Edgar Kennedy slow-burns; Sluggo has his rootless joy in an aimless existence. Fate has made them neighbors. Hate becomes tolerance, then circles back on itself.

It's a fascinating dynamic that, I believe, is unique to the American comic book: characters that are neither friends or adversaries, yet whom constantly interact and connect. There's no rivalry, no obvious effort at one-upmanship. It's a bit like seeing two chemicals interact in a science experiment. They repel each other, draw each other closer, then repel again.

Stanley spent two years with these characters, then dropped them to pursue a final clutch of original comic book creations. He had earned the right, many times over, to surpass licensed properties in his comics career. These stories, acrid though they often are, remind us of his skill at taking an outside concept and making it his own.
Posted by Frank M. Young at 10:30 AM