Here's the final story John Stanley wrote and drew in the "Woody Woodpecker" series that ran in New Funnies.

This is a choice example of Stanley's cartooning. His lines are full of life, and he routinely avoids static compositions. Despite some crudeness in his rendering, his finishes stand out from the other, more conventional cartooning in the magazine.

The story is not among Stanley's finest narratives. It's akin to a 1940s "spot gag" animated cartoon. A loose situation is set up, a string of gags reel off, and the story abruptly ends.

There's not much to hook the reader. The story lacks clear conflict. Thus, it's much like the contemporary Walter Lantz animated cartoon product. Though beautifully and innovatively directed by James Culhane, Woody's cartoons suffered horribly in the story department.

The stagnant, pun-happy and incoherent writing of Ben Hardaway is to blame in the Lantz cartoons. In his autobiography, director Culhane complains of Hardaway's limitations as a writer and humorist. It's painfully evident in the finished cartoons. They're gorgeously animated, strikingly designed, and full of appeal...but they always run out of steam, or self-destruct with a crappy, out-of-nowhere conclusion.

In comparison, this story has a simple but compelling structure. If there were more room to develop a rational conflict between Woody and the logging camp dude (who suspiciously resembles Woody's canine neighbor, Tackhammer), the piece might actually have become less funny.

Stanley evokes some original tree-felling gags (a notoriously limited comedy genre, the chopping-down-of-trees). He peppers the story with many of his trademark tics: "Ha! Ha! Ha!" and "Yuk! Yuk! Yuk!"s galore, and a spectacular instance of his "windmill action" device: 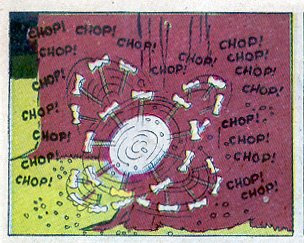 Stanley returned to drawing "Woody" in 1947, with a brief but brilliant series of one-page gags. These were printed on the inner front and back covers. I presented two examples of them way back in August.

Not much more to say about this story. I could digress to the whole cruelty-of-clearcutting issue, and, believe me, it distresses me, but I've got laundry to do.