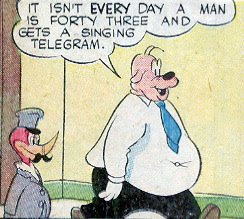 From 1945 to 1947, John Stanley took on the drawing and writing chores on the "Woody Woodpecker" feature in New Funnies. These jobs were occasional, and borne of necessity.

A glance through the 1945 and '46 issues of New Funnies shows a chaos of artists and writers. No one consistently scripted or drew any of its monthly features.

During this period, the magazine smartened itself up. It lost its quaint, pre-war Art Deco logo. A bold post-war look included a logo in lower case letters--tres chic--and Mondrian-ish blocks of solid color.

It was nice while it lasted. With issue 109, the bold design was softened. The lower-case, sans serif logo lasted into the early '50s. I wish some of Dell's other anthology titles had gotten similar moderne makeovers.

The innards of New Funnies also changed. All the non-Walter Lantz features were quietly dropped from the book by 1947.

These non-Lantz, never-by-Stanley features, including "Billy and Bonny Bee," "Raggedy Ann and Andy" and "The Brownies," make earlier issues of this title a very quick read for Stanleyphiles.

These stories are sad examples of comics written down to the supposed level of children. Blandly drawn and timidly written, these stories were undoubtedly well-intentioned. That's the nicest thing I can say about them.

Prior to 1945, the only New Funnies features consistently scripted by Stanley were "Andy Panda" and "Woody Woodpecker."

Starting in '45, the non-Lantz features were lessened. They were segregated to the back of the book. The first one to go was "The Brownies."

Artists and writers galore pillaged the Lantz properties in '45 and '46. There are a couple of 1946 issues of this comic that have almost no Stanley material in them.

By 1946's end, the book was finally settled into a comfortable pattern. Stanley regularly wrote "Andy Panda," Oswald Rabbit" and "Woody," with occasional forays into the controversial "Eight Ball."

When issues of New Funnies are sold on eBay, the auction headlines invarably read like this:

This is a true statement, but it's made at the expense of the genuinely good material in the title. The idea that someone would collect these just for the "offensive" material, as some artifact of American racism, rather horrifies me.

One of the benefits of the chaos that swept this comic book was Stanley's emergence as a cartoonist. "Woody Woodpecker" was, clearly, a feature dear to Stanley's sensibilities. The series contains his most inspired New Funnies writing.

That he would choose to do the finished art on several 1945/6 stories, plus some stylish inside-cover gag pages in 1947, says a lot about his affinity with "Woody."

Here is a beautifully written and drawn Woodpecker story from 1946. It is one of a series of stories in which Woody aggravates the already-irked Mister Tackhammer, his hulking middle-aged neighbor.

As with Carl Barks' contemporary Donald Duck stories, in which DD battles with his boorish, aggressive next-door-neighbor Jones, the Tackhammer stories are suburban comedies of domestic warfare.

Barks never invested much in Jones' characterization. He did what was needed--to trigger Donald (and the narrative)--but there's not much to him as a character.

Stanley gives Tackhammer some subtle, amusing pathetic qualities in the story you're about to read. The business with the singing telegram, and Tackhammer's emotional preparation for it, are priceless.

Stanley may have had some help with the inking on this episode, but the poses, compositions and much of the rendering is clearly his work. This is some lovely cartooning.

Stanley's last self-drawn WW story appeared two issues after this one. That story is pure Stanley, and compares to the Jigger and Mooch stories he would soon do for Animal Comics.

1947 saw the brief glory of his inner-cover Woody gag pages. When he quit the title, later that year, the gag page format (plus many of his innovations to the book) continued, in poor simulations of Stanley's approach.

Whenever I see Stanley's work as a cartoonist and writer, I wish that he had been able to draw more often. We would have much less of his work, but the stories that did exist would be more satisfying. Some of the artists who did his finishes took a lot of the oomph out of his carefully laid plans.

And now...here's a most amusing story written and drawn by Mr. Stanley.