Professor Thomas Andrae, of Berkeley, California, is a fellow student of John Stanley's work. We have been exploring the lesser-traveled byways of Dell's comics publications of the 1940s, '50s and early '60s, in search of John Stanley-written material that earlier scholars may have overlooked.

Andrae found this comic and brought it to my attention. Thus, I present it to the world as a very likely work of John Stanley.

I have recently become aware of a division of levels in Stanley's published work. It is obvious to me that multiple editors worked on his material.

When said editor ruled with a lighter hand--as on Little Lulu--we have Stanley at his best. Understandably, as Dell managed numerous licensed properties in its comics, book publishing and merchandise materials, it was important for writers' work to be scrutinized.

Carl Barks occasionally chafed under this scrutiny. Whole stories of his were jettisoned, due to an editor's feeling that the characters--Disney Studio properties, each and every one--were not behaving in an acceptable way.

This happened to Stanley at least once--with his infamous Little Lulu story, "The Bogeyman." Further, less severe alterations of work must have been a regular issue with all the authors who created licensed-property material for Dell.

Now: add to this the personal preferences of each editor. In our previous post, we saw that the editor of Ghost Stories (believed to be eccentric cartoonist L. B. Cole) may have compromised the clarity of Stanley's narratives by demanding shorter stories. (This is just a supposition; I wish there was some written history of Dell Comics!)

Other editors may have seen fit to soften Stanley's material, rewrite dialogue, and use other means to dilute his creative efforts.

Mind you, this is all supposition. I have no hard facts to back up anything I've said. I feel that it does seem likely. As Dell operated outside the regular comics community--they even printed their comics on-site--and thrived on the use of licensed properties galore, they had a unique set of standards.

They couldn't risk upsetting the owners of the many copyrighted characters they brought into comics form. In best-case scenarios--as with Marge Buell, creator of the Little Lulu cast--a harmonious creator/adapter relationship emerged.

(Buell, as you may know, eventually sold the rights to the Little Lulu universe to Dell/Western. I suppose she felt her characters were in good hands.)

This "Four Color" book has a number of Stanleyisms, from ellipses to one "Yow," which the heavy-handed editor apparently missed, having transformed many of them into "Wow"s.

Following is a page from the longer first story in this comic book. Here is a typical tell-tale Stanleyism: floating eyes in blackness. In this case, one eye is curiously deleted, but the effect still comes through, and with humorous impact: 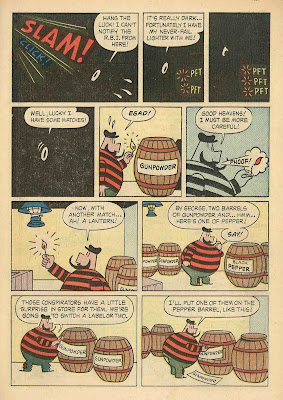 And now, for your consideration, here is the shorter second story from this Little King one-shot. Keeping in mind that Stanley obviously had more than one editor, and that his writing was edited, and not simon-pure from his head to the printed page, it seems feasible that this could be his work.

The Little King passes one important Stanley Story rule: in the opening sequences, as he "roughs it" by walking to his mountain lodge, he emits a lot of what I call "Tubby Talk:" a monologue rampant with self-justification and childlike insecurity about status.

I feel that Thomas Andrae has made a new find in comix archaeology. While it's not top-tier Stanley, I truly think Stanley's hand is evident as writer, although the presence of an editor's blue pencil is also strongly felt.

While this is not exactly a chilling Halloween topic, perhaps the question will lightly haunt you as you go about your day... enjoy, and please respond with your opinions!

Labels: Is This Stanley's Work?, Little King, Stanley in the 1950s, supposition and theory

Stanley did other Little Kings besides this one. check at least 1956 (