Happy Daylight Savings Time Sunday--that is, if you live in one of the many states that still participate in this cockeyed ritual. And here's a cock with which to feel cockeyed...

Among Stanley's earliest Dell assignments was "Hector, the Henpecked Rooster." This was one of at least three properties Dell licensed from New York animation studio (and wing of Paramount Pictures), Famous Studios.

Famous was the remnants of the staff of Max Fleischer's innovative animation studio. The Fleischers created some of the best animated cartoons of the 1930s. Their sheer energy, imagination and visual verve made Disney's slicker product look prosaic and anemic.

By 1942, the brothers Fleischer had been drummed out of their own studio--they were victims of rather vicious Hollywood business moves. (This blog isn't the place to get into movie-studio politics, etc., but the information on what happened to the Fleischers is out there...)

From the start, Famous trafficked in offbeat characters. Like Dell, they used licensed properties-- E. C. Segar's Popeye and (in an eerie tie-in with John Stanley) Marge's Little Lulu.

At the time these stories were published, Famous Studios still had plenty of promise. Their characters had a brutal, self-preservational bent that became more vicious and more pronounced as the cartoons sank in quality, later in the 1940s.

Famous continued to create interesting cartoons into the 1960s. Their series cartoons became highly repetitious by the early '50s. Famous' one-shot cartoons contain some surprisingly strong ideas and graphics, and are among the most underrated animated shorts of their era.

Dell dropped their Famous-licensed characters by 1946. The early characters featured in Animal Comics--which also included the one-shot cartoon star Cilly Goose and Famous' answer to Bugs Bunny, Blackie Lamb--were phased out of the animated films by 1947.

The Famous characters--Casper the Ghost, Herman and Katnip, Baby Huey, Little (shudder) Audrey--bounced around a few publishers before finding a permanent home at Harvey Comics. Harvey now owns the rights to the Famous characters. They made a lot of money repackaging the Famous films for TV.

That's a lot of non-comics information, but I hope it's interesting all the same.

Here is the first Hector story, from the June/July 1944 issue. Stanley had already taken on some of the regular features in New Funnies, and the Tom and Jerry feature for Our Gang comics in 1943.

This is an amusing, if troubling, series. Hector is abused and debased by his brutal, overbearing wife. Her behavior towards him gets harsher and harsher in the five stories Stanley wrote for this series.

In Stanley's final Hector story, in issue 13, Hector gets two black eyes from his wife, and fakes his suicide in an attempt to wring a drop of empathy from her. I'll have to run that one here sometime soon. (Stanley also wrote the Blackie and Cilly stories in that issue.)

In the other Stanley-written "Hector" stories, as in the Famous cartoons, the timid rooster's ace in the hole is Herman Mouse, a smart-ass, street-wise rodent who enjoys hassling Hector's vicious "bitter half." She is terrified of mice, you see.

This gentler, more pastoral story features Hector and his family on a picnic. Mice are nowhere to be seen, but opportunistic frogs and gourmet ants are on hand.

Stanley loads this story with amusing and clever touches. The story offers a strong helping of his comedic wordplay, and of some of the character dynamics that would later be seen in Lulu and other better-known features. There's a unique occurence of a hilarious sound effect, when Hector blunders into the water at the end of p.1: 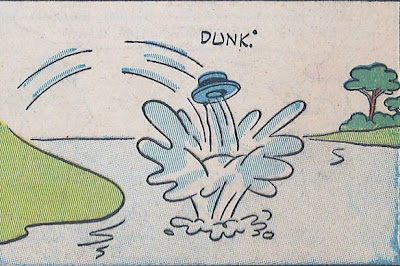 I love that it ends with a period. Alas, a blot on the paper--either a fleck of woodgrain or an engraving flaw--makes it appear as a colon.

Other notes: the mis-spelling of "lox," early occurences of "YOW!" and "Choff! Chompf!", and the spree of "windmill action" that literally winds up the story.

You can also see some pencil-scrawled dialogue in the word balloons. Perhaps Dell was saving rubber for the war effort by not using erasers!

Stanley would return to Animal Comics in its latter days with one of his finest "auteur" features, Jigger and Mooch. You can find three examples of this series in earlier posts on this blog.

I hope you enjoy this story, er, famously...

Hope to see Stanley's take on the infamous Blackie Lamb.

Frank, this is awesome stuff. Can you send me over all the Famous Dell stories you have, even if they're not by Stanley?

Going by the signature at the end, this was drawn by Fleischer/Famous animator Rube Grossman!