Bill Williams was perhaps the best artist who ever worked with John Stanley. The grace and verve of his pen lines, added to his adroit and expressive human figures, was uncommonly fine for humor comics, then or now.

Williams' best-known collaborations with Stanley happened in the early 1960s, with the one-two punch of Kookie and Around the Block with Dunc 'n' Loo.

Their partnership had a prelude, one decade earlier. Stanley wrote the first issue of yet another licensed-property book for Dell Comics.

Henry Aldrich was based on a popular radio program, which also sired a series of low-budget movies (themselves the precursor of TV programming). Billy Wilder and Charles Brackett wrote the first Henry Aldrich movie, 1939's What a Life. Former child star Jackie Cooper was the first to portray Henry in the movies.

Henry was already on TV (The Aldrich Family) by the end of 1949, when this comic book was prepared for publication.

The Dell Aldrich seems based on the later installments of the Paramount series--and/or the TV version. In the hour-long movies, James Lydon portrayed the adenoidal, fumbling teen whose squeaky "Coming, Mother!" catchphrase punctuated both film and airwaves.

As usual, Stanley takes formula material and wrings something unusual and impressive from it. He eschews high-volume, frantic action and exaggeration for a more character-driven, down-to-earth atmosphere.

Compare this story to any of the Stanley/Williams Dunc 'n' Loo material I've posted earlier on this blog. It's much more chilled-out and relaxed.

Stanley had 52 pages to fill in this 1950 comic book. Thus, he could linger over the stock-comedy situations, such as in this untitled story. Insomnia leads to a series of escalating snafus--but, unlike a typical Little Lulu story of the era, there is no screaming, shouting or flailing of limbs.

There is something lovely about the spaciousness and hush of this story. In 15 pages, it can take its time to work through its mildly humorous sitcom events. Again, compare this ambling pace to the compact, frantic tone of the 1960s material.

This slower approach truly conveys the feeling of night, and of being alone in a socially awkward situation.

It also allows Stanley some beautifully timed pantomime. Check out page 5 of this story. John Stanley earned his payment with that one elegant page.

Henry indulges in some "Tubby Talk" throughout the story. As is standard for the Stanley protagonist, Henry navigates the world via his own compass. He is considerably better-adjusted than Tubby Tompkins, Woody Woodpecker or Peterkin Pottle. This does not preclude him from the self-serving delusion that is a Stanley character's cockeyed state of grace.

Now, for dessert... Williams' handsome cover to this issue! 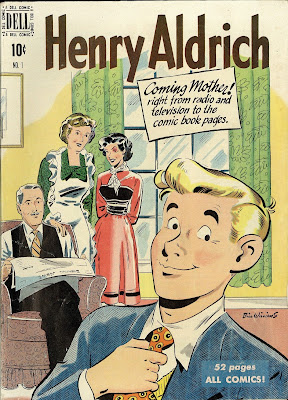 "One strip of bacon later.." haha. This was a fun story, I've always been curious about this comic book series as I love the old Aldrich films--- especially Henry Aldrich Haunts a House of course!

Real nice blog, I'll add you to my links over at THOIA.

Yow! Sluggo as a realistically drawn teenager... never having gotten into the old Henry Aldrich movies or shows, I'm not sure I can adjust!