Hi gang... well, since I had scans of this entire 36-page funnybook, I thought I'd post some more excerpts. I don't want to take away from the impact of Drawn & Quarterly's upcoming reprint of the Stanley Nancy series, so I'll lay low on this-type material in future...

If you're reading this in Australia, New Zealand, or in neighbouring parts, it's practically summertime where you are. Perhaps these stories will seem more apt.

This "Four Color" issue is an anomaly. It comes well into Stanley's run on the regular NANCY title. Stanley had already created a magnificent 100-page LITTLE LULU summer camp special, two years prior.

In that milestone issue, Stanley pioneered a lovely longform style of storytelling, in which a score (or so) of short stories all weave into a cohesive, flowing book-length narrative.

When reading Dan Clowes' Ice Haven, I was reminded of Stanley's summer camp comics. Clowes took the concept one step further, by transmuting the narrative 'pearls' into a variety of genre comics styles. All this flash and dazzle would seem empty, were these devices not driving the story Clowes wished to tell.

This story form would reach its apex with the pair of 84-page Nancy & Sluggo Summer Camp specials published in August 1960 and '61. Stanley would return to it, in a more subtle usage, in the Thirteen Going on Eighteen series a few years later.

Back to this material...my guess is that Dell wanted to test the sales waters and see if the Nancy material would sell when blended with the summer camp genre. The answer, an obvious 'yes,' gave birth to those magnificent twin Dell Giants.

In the first story featured here, "Off To Camp," Stanley introduces one of Nancy & Sluggo's key supporting figures, the suburban Jekyll and Hyde, Mr. McOnion. Note that he's drawn as a bland, button-nosed layabout here.

This is an excerpt from the next NANCY camp giant, in which we see McOnion at his most typical--a deadpan psychopath stalking a terrified Sluggo in a helpless world: 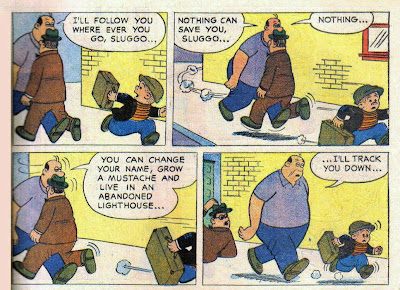 Stanley had yet to develop McOnion's sinister side, although he is as clearly vexed, as Sluggo's neighbor, as he would be in later episodes.

The genuinely creepy relationship between Sluggo and McOnion is of a piece with the more disturbing aspects of Cold War mass media. Gloom and doom figured prominently in popular entertainment, as it had during the two World Wars.

In the shadow of H-bomb armageddon, pop culture got darker than our nostalgia would like it to be. Stanley's comix writing was a prime force in this pitch-black era.

Things are considerably lighter in tone here. These three stories are in sequence, and provide the basic set-up for a summer camp comic book. "Off To Camp" sets up the formula: underprivileged Sluggo can't go to camp...or so he thinks.

In "Camp Fafomama," Sluggo must endure much physical and mental battery to attain his place in the sun.

Finally, for a moment in "The Bank Holdup," stagestruck Sluggo undergoes some sort of self-hypnosis to attain a higher status.

Just think...one day soon, you'll be able to enjoy these stories in a lovely Drawn & Quarterly-published volume! For now, here they are for your computer screen...