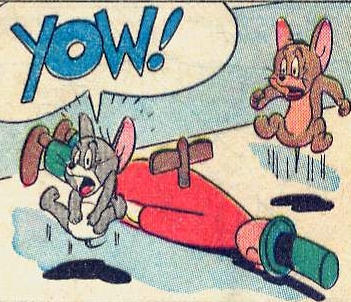 The thing that really hooks me about John Stanley's work: there's so much of it, and it's hiding between the cracks of comix history.

Much of this time is wasted--but perhaps none of it is in vain. When I discover a story such as the one you're about to read, all that dutiful perusing pays off.

I had no idea that John Stanley returned to writing "Tom and Jerry" in 1947/8. It makes sense, and solves a mystery. Stanley abruptly left his four-year tenure on Dell's New Funnies title in 1947. How did he manage it?

His long-term gig in Little Lulu was established by this time--it seemed clear that Lulu was going to get her own title.

By 1947, Stanley often wrote 32 pages of content, per issue, on New Funnies. It represented a substantial loss of income for him to leave that title.

In 1946 and '47, Stanley seemed determined to establish himself as a writer-cartoonist. He illustrated several "Woody Woodpecker" stories for New Funnies, and began his "Jigger and Mooch" series for Animal Comics. He would try once more with "Peterkin Pottle," for Raggedy Ann and Andy in '48 and '49.

During this period, Stanley had at least one cartoon published in The New Yorker. A cartoonist could hardly do better; that's as upscale as it gets. I've recently learned that Stanley may have also written some gags for other New Yorker cartoonists. Next time I get to New York, I'm going to research this further.

It could be that the work on The New Yorker bolstered Stanley's income. I'm sure they paid much better than Dell. Even the writing of gag concepts probably gave Stanley more $$$ than his work on a 10-page comic-book story.

Drawing his own stories gave Stanley some pleasure and satisfaction, I'm sure. His work at Dell had often been indelicately rendered by staff artists--some great, some bad, most of them merely competent.

Stanley had the smarts and the skill to make it as a magazine cartoonist. Perhaps he preferred the relative freedom of the Dell titles. They gave him a large playpen, with seemingly stern rules that were seldom enforced.

Furthermore, by assuming the responsibility of the monthly Little Lulu book in 1948, Stanley became a great storyteller. LL gave Stanley the discipline and the sheer experience that he needed to refine his art, take risks, and develop the already-strong techniques and narrative ideas he had already shown to the world.

This remarkable story comes from 1947. I assume that Stanley picked up the "Tom and Jerry"-related features from Our Gang Comics to make up for the loss of the steady New Funnies gig. He had written T&J from 1942 to '46, and had established his take on the licensed characters.

Yesterday, I posted two 1945/6 T&J stories. They're fine pieces. They suffer somewhat from the cramped wartime format, when Dell's 64-page comix went, without warning, from 60 to 52 to 36 pages, as paper allotments permitted.

All of Dell's auteur cartoonists suffered from this crunch. Carl Barks, Dan Noonan, Walt Kelly and others were forced to abandon the spacious, sunny, open feel of their earlier work, and compress stories into relentless 12-panel grids, reminiscent of the Fox Comics titles of 1939.

Some of these stories were obviously cut-and-paste reductions of longer stories. Some of Barks' short "Donald Duck" stories bear obvious evidence of a hasty reformat.

Dell stuck with the four-tier format for most of their humorous titles after the wartime restrictions eased. Their comics still veered between 52 and 36 pages, so it made sense to stick to this more flexible format.

I think these wartime rigors also helped hone Stanley's skills. By 1947, his writing had a new sharpness and compactness.

The difference between the story you're about to read, and those I posted yesterday, is striking.

Stanley completely dispenses with Tom Cat in this 10-page story. He takes risks with his self-imposed T&J format by making Jerry, ordinarily the voice of reason, more prone to taking chances.

We're in the urban Anywhere of Stanley's Little Lulu stories. And, better yet, Stanley uses one of his pet LL devices--little wind-up mechanical men. In the John Stanley universe, there is always a sweaty, disreputable street vendor, his display case hastily opened on a side-street, his little wind-up men on temporary display, until a cop, munching a stolen banana, puts a stop to his free enterprise.

I think this story's use of the wind-up men pre-dates any appearances in Little Lulu--tho' I could be wrong. This could be one of those birth-of-a-notion stories.

Regardless, this is a beautiful story, rife with vital Stanley themes and peppered with his lovely use of language. The business with the raindrops, towards the story's end, achieves a kind of comixmatic poetry. I was tickled pink to spot this story, and am equally giddy to share it with you.

There are more, too! They'll show up here. And now, I shall, pardon the pun, wind up my spiel and raise the curtains... 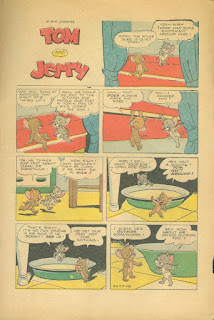 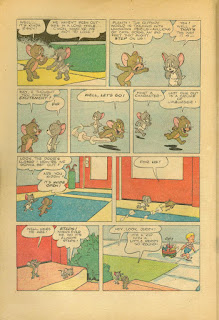 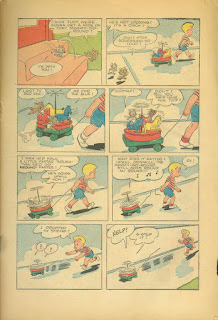 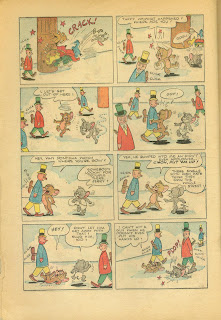 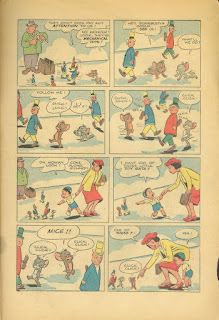 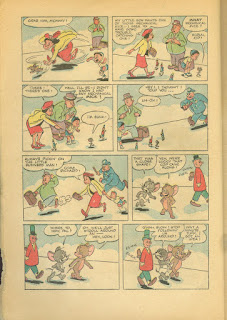 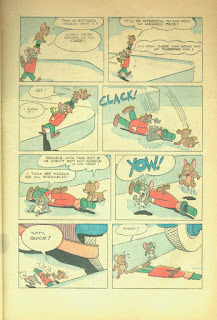 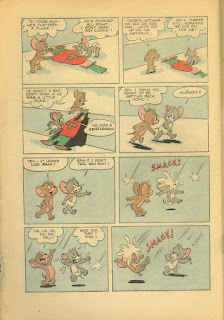 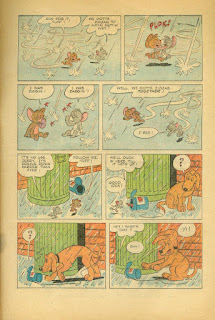 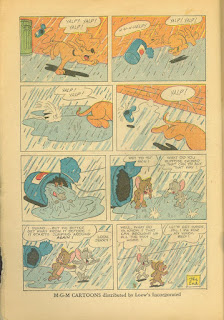 It may be of interest to you, Frank:
There's a beautiful Stanley strip called "Bridget"from the gigantic comic book Wham-O Comics on D&Q blog. Anyway your name appears on Devlin's post.
The link:
http://www.drawnandquarterly.com/blog/2009_03_01_archive.php#6330950720274893219
Regards-