The refreshing wintry landscape should be a balm to those already suffering the onset of spring/summer heat and humidity.

This early on, Stanley's work has much in common with his transcontinental rival, Carl Barks. Both creators gave their 1943 efforts an open, bouncy, spacious feeling, with an emphasis on high-speed, knockabout comedy.

When wartime paper restrictions doomed the three-tier page layouts of most Dell features, in 1944, that sunny spaciousness almost never returned to their collective pages.

Barks and Stanley would indulge in pastoral pieces (Barks far more than Stanley), but the space restrictions permanently altered both creators' approaches towards making comix. Through force of habit, both artists became instilled with the desire to cram more action into less space.

This story is a prime example of the "open" 1943 sensibility. Altho' filled with vibrant slapstick and wild physical action, there is a sense of space in these panels that is refreshing.

As well, the narrative is akin to many a Barks farce, with our heroes ending up in some far-flung place, due to their cheerful ineptness, which unleashes a [literally] snowballing chain of events.

This is a type of story Stanley would quickly stop writing. From 1944 on, his stories' conclusions have a gravity that is often deeply felt by the reader. One always feels that Barks' Donald and the nephews, even if stranded in Timbuktu at story's end, will easily make their way back to Duckburg in time for next month's romp.

Stanley characters regularly face sobering and bracing finales. They will, just as often, be evicted from their homes at story's end, or have to accept a mixed bag of good and bad outcomes.

I'm not saying one approach outdoes the other; both are potent formulae. Both served these two towering comix creators very well during their long careers.

It is neat to see Stanley "doing a Donald" with this very funny, lively early farce.

The 1943 issue I scanned this story from must have gotten damp some time ago. Opening its bag unleashes an assault of vintage mold and mildew fragments. Tho' unseen on the pulp paper pages, they are deeply noticed by my sensitive sinuses. Whew!

By scanning this story, I no longer need to reopen this bio-degradable Pandora's Box. Hurrah! 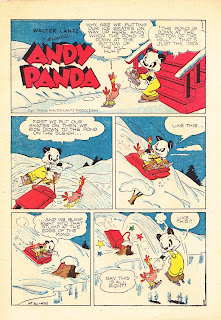 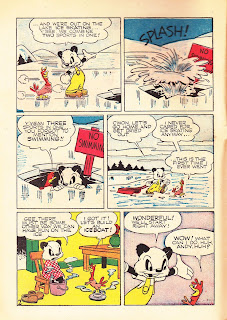 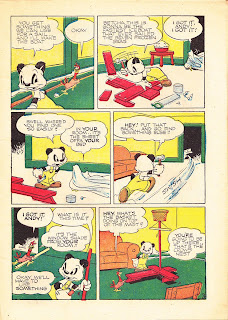 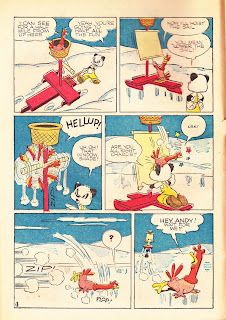 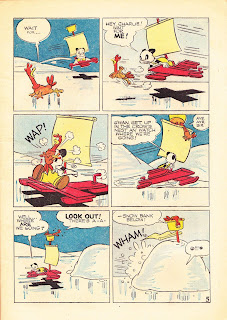 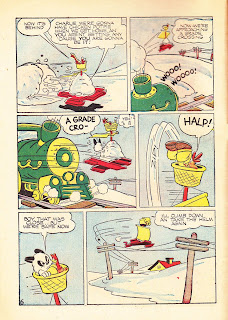 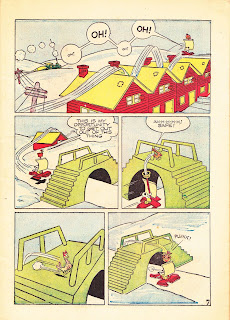 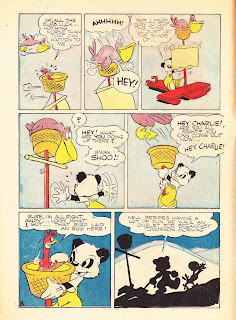 A real charmer. I loved the stupid walk Charlie does when he sees his chance to 'escape'.

Yes, that spazzy scoot-skipping on the overpass is hilarious. It looks like Charlie's doing a pogo-stick move--without the pogo stick.