While we're still in Li'l Eight Ball mode, here is Stanley's greatest, creepiest story of that series. Probably the only Li'l Eight Ball story--or commercial entity--that can be referred to as great in any way.

I ran this story, years back, on the primitive, original Stanley Stories website. It deserves a revival. I believe that Professor Thomas Andrae refers to this story in his new book, Creators of Humor in Comic Books. Dr. Andrae consulted with me during the writing of this book. I contributed some research and text to it. I don't know what work of mine survives in the published volume.

If you're reading this, Thomas, please drop me a line. I'd like to know how you are!

Now onto today's story. This appeared in a late WWII issue of New Funnies, in the depths of paper rationing. Most comix published from 1944-6 suffer from low-grade pulp paper, highly susceptible to browning, brittling and foxing.

Dell's in-house printing quality was never worse than in these years. The size of their comics unreliably wavered between 52 and 36 pp., depending on the paper allotments, I'd guess.

This is from one of the 36 page issues. Stories were reformatted to run on less pages. Same thing happened to Carl Barks' work, and to other Dell creators.

This is really a Halloween-type story, but since I ran another Stanley Eight-Ball, now's the time to give this deeply disturbing piece another day in the sun... 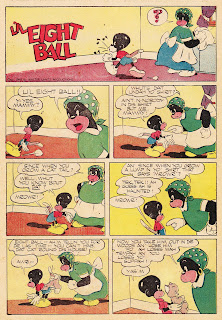 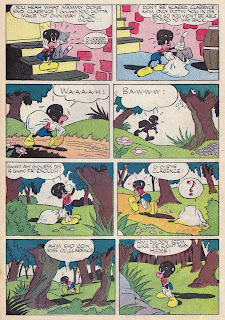 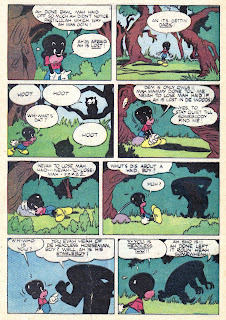 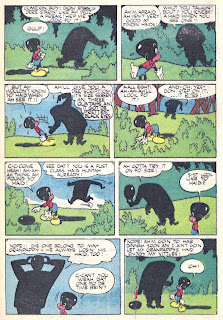 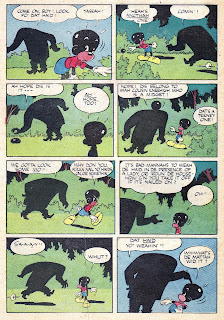 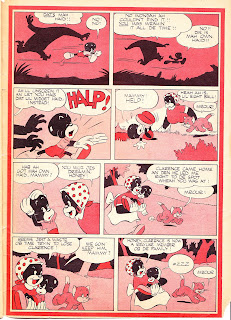 I've mentioned before a certain parallel in Stanley's work and writer Roald Dahl's. That dichotomy seems quite strong in this brutal, trauma-ridden story.

Both authors never flinched at the chance to depict the dark side of childhood, and of growing up. Indeed, the antics with the
"Headless Horseman's stableboy," as that nightmarish silhouette tags himself, pales next to these two panels of Li'l Eight-Ball, deep in the vast woods, crying because he's been ordered to rid himself of a lovable pet cat by his irascible, mood-swinging Mammy:

I don't believe this is intended as comical. To devote an entire tier of precious space to this pitiful, private moment of grief is rare and jarring indeed. A moment such as this removes the regrettable racist trappings from this character and reveals him to be, for the blink of an eye, a sympathetic, relatable, deeply human creation.

Today seems a most apt day to appreciate the effects of trauma. 'Nuff said.

Of course, comix history contains a jillion such scenes, of disappointed, scared or discouraged kids bawling, usually over something trivial. I don't want to make too much of this moment, except to note that it exists, and seems to me more disturbing than the life-threatening actions that follow it.

The exchanges between Eight-Ball and the headless dude have a vaudevillian ring to them; they feel like Stanley trying to approximate the cadences of his friend and colleague, Walt Kelly. Perhaps it's the Deep South dialect, but their dialogue has a certain Pogo-esque feel. It isn't hard to imagine Albert the Alligator as the Headless Horseman's stable-boy, and Pogo in the Eight-Ball role.

The story's happy ending doesn't chase away the genuine feeling of trauma evoked in its earlier pages. Were I Eight-Ball, I'd have a hard time trusting Mammy again, and would likely find myself in the therapy process in adulthood.

Ever one to end stories on off-note zingers, Stanley punctuates the fragile stability of the ending with the cat's de-punctuated MROUR

Coming next: a brilliant "Woody Woodpecker" story from the same battered, browned issue of New Funnies!
Posted by Frank M. Young at 11:58 AM

Stanlet had a real knack for funny-scary!