Here at "Stanley Stories," we take requests. Not many folks have stepped up to the mike and asked for a particular story, so it's always a delight to get a nice note from our readership, with a query about a certain story.

Today's story is a special request by the talented cartoonist and story-teller Trade Loeffler, author of the web-comic Zip and Li'l Bit, which you can peruse by clicking HERE.

Trade also has a book coming out early in 2010 for RAW Junior's TOON Books imprint. We wish him all the success in the world--and in the comix world, extra wishes can't hurt!

Trade and son asked to see a classic "Little Lulu" story. I tend to shy away from Lulu stories that are currently in-print, via Dark Horse's trade paperback reprint series.

However, those stories from Stanley's classic late 1940s-mid '50s period, are not printed in color. Most newer readers of Little Lulu have never, and will never, see them as they were originally intended and as published.

As well, this story is peak Stanley work--a brilliant set-up, in which a single, innocent action is repeated, building in tension and humor with each reiteration, and through the richly developed personae of Stanley's "Lulu" cast.

It is, indeed, a rainy day here in Seattle--windy and cold, too. I'm feeling on the verge of illness. I've tried to work today, but have not gotten far. I think now is the perfect time for us all to enjoy a "Rainy Day." 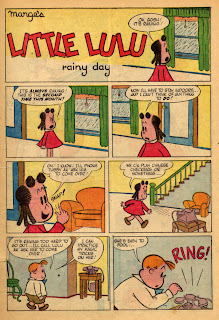 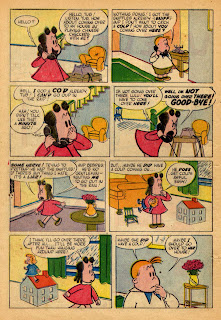 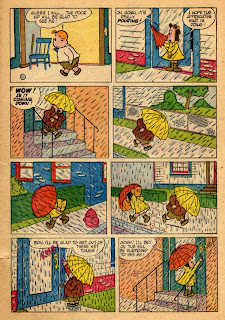 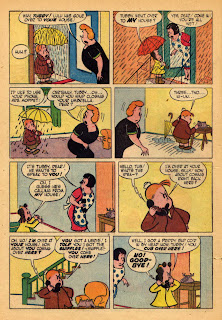 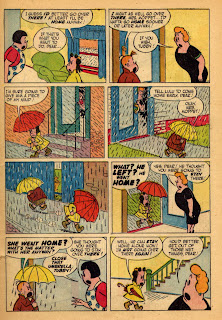 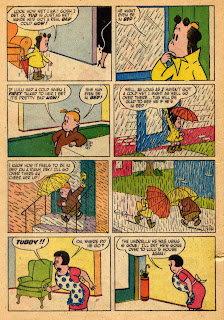 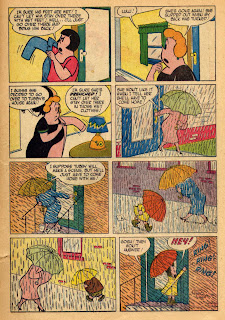 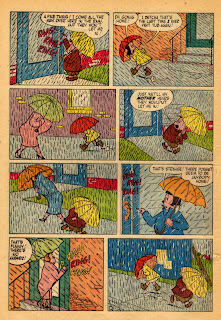 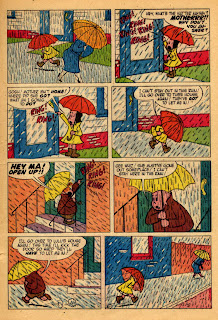 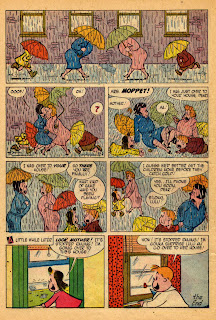 It's mind-boggling to consider the consistent, almost dogged brilliance of John Stanley's Little Lulu. Issue after issue, one great story follows another. Rarely does the writing seem forced or compromised. Lulu seems effortless on its author's behalf.

It's easy to take such reliable, high-quality work for granted. But this body of comix deserves to be regularly recognized for its intelligence, creativity, and integrity.

These aren't just funny stories about comical characters. John Stanley added so much emotional and distinct shading to his work on Lulu.

He certainly didn't have to go to all this trouble. Little Lulu was, very likely, seen by Western/Dell as "good clean fun for the kiddies"--a popular licensed property that would attract readership on its reputation alone.

Certainly, many of Dell's other licensed-character comix were run-of-the-mill, at best. Look beyond Stanley, Carl Barks, Walt Kelly, Gaylord DuBois and a few other inspired creators, and Dell's output is, largely, lifeless tripe.

John Stanley seemed to really enjoy writing Little Lulu. He had given so much of an inner core to its characters--little more than stick-figures in Marge Buell's original magazine cartoons.

It's apt that Lulu was a shill for Kleenex tissues for many years. Her media, outside of the Stanley comix and a few of the early Famous Studios animated adaptations, are like tissue--simple, soft, and prone to collapse under scrutiny.

"Rainy Day" is a prime piece of sitcom, Stanley style. What makes this story funny is NOT just the motif of Lulu and Tubby missing each other as they trod, back and forth, in the rain to each others' homes.

It's the war of wills between stubborn Lulu and ego-maniac Tubby--archetypical yin and yang characters, who both need one another and repel one another, like identically charged magnets--that helps this simple scenario build to a delightful crescendo.

Lulu and Tubby's duelling determination to manipulate one another into doing things their way soon sucks in their mothers, who join the ping-pong match to and fro, from the Moppet residence to the Tompkins'.

For once, Lulu is also inducted into Tubby's mindset. Sensing that Tub is fibbing about his >sniffle< cold, she fakes a considerably less convincing illness. Beautifully, as the inexorable story-wheel turns, Tub forgets that Lulu was an obvious faker--he buys into the exact style of deception he deals.

Finally, the kids' mothers worry, understandably, that their kids might be catching a cold from all those trips through the rain. Lulu and Tubby end up having sort-of fun when they realize the extent to which their mothers have been drawn into this deceptive scheme.

Typical of his peak-period work, Stanley ends the story on a double-edged kicker: the skies clear up, and Lulu and Tubby decide to initiate a new wave of back-and-forth. We don't see them leave, and we don't need to. It's just the thought that they've learned nothing from their recent experiences that gives "Rainy Day" its boffo closure.

Trade and son, I hope you enjoyed reading this fine story in full color. Ditto to all you other fine Stanley Stories followers!
Posted by Frank M. Young at 4:04 PM

Frank, thanks so much for the kind shout out, and for posting this story request. My son, Clark, and I read it tonight for his bedtime story and loved it.

I really enjoy the incredible plot for this story, in fact I think I enjoyed the set up so much that I overlooked how much the interaction between Lulu and Tub add to the mix. So your commentary (as usual) is invaluable.

I don't have a specific request, but would enjoy seeing early Lulu stories that were drawn as well as written by Stanley. Please don't hesitate to post material included in the Dark Horse black and white series. Seeing the stories in their original color makes a huge difference.