We're in The October Country. The last vestiges of sunny, sweltering summer are fading. The green leaves of those recent days become crimson, ochre and gold. They end their lives and flutter downward to form a beautiful carpet of autumn color.

The wind's in the treetops. You can hear it at night, whistling through the cracks and corridors of silent buildings. Neighbors who, only weeks ago, were running around in next-to-nothing now don sweaters, overcoats, leather jackets, wool hats and scarves.

It's my favorite time of the year, in case you didn't get that already.

To celebrate the finest month of them all, this month's Stanley Stories posts will be all Halloween/horror/weird 'n' eerie in tone.

I've had a standing request, from several followers, to run more of the hard-to-find Little Lulu Halloween giants. As well, votes for more of Stanley's eccentric, subconsciously pregnant serious horror comix have been cast.

And, as morbid themes dominate Stanley's work, I'll select gruesome gems among his "regular" comix--stories that have, as colorfully described in some old blues lyrics, "that graveyard sound."

The first two stories from this 1958 Little Lulu and Tubby Halloween Fun #2 were posted HERE back in August.

Here are the next three stories from this exceptional slice of Stanleyana.

"The Witch Tree," which serves well as a warm-up, is a classic battle-of-mind-fudgery between Lulu, Annie and Tubby. 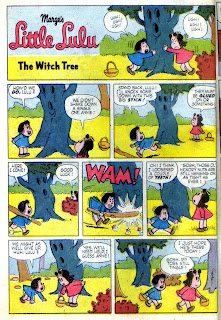 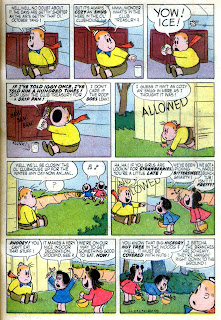 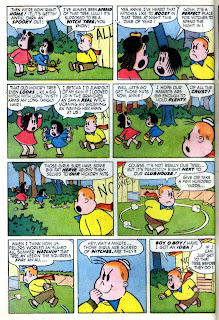 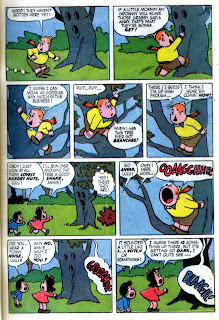 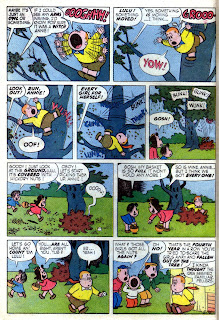 While nothing spooky happens in the story (except for Tub's premature senesence), "The Witch Tree" is expert, character-enriched sitcomix (new word!). Tubby's casual revelation that he's endured this self-destructive ritual for the fourth time gives a strong comedic topper at story's short, sweet end.

"The Case of the Busted Shoe," which follows, uses the Halloween element in a subtle but original manner. This seasonal theme, while subtly present, spices up another strong serving of Stanley sitcomix--in which "The Spider" spins his incriminating web on Lulu's hapless pop. 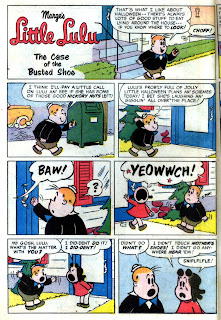 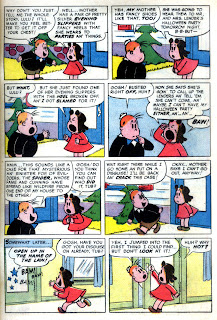 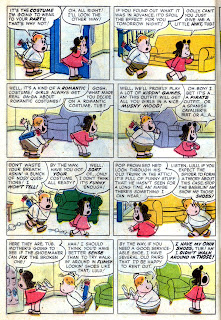 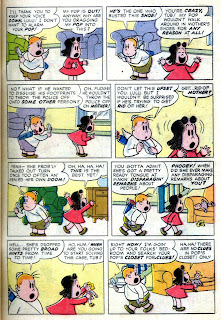 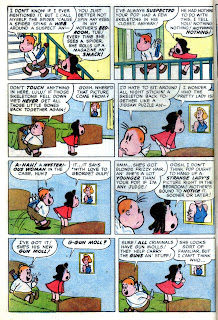 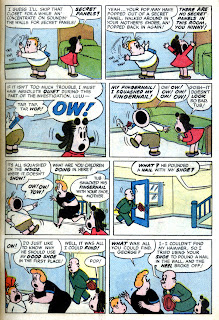 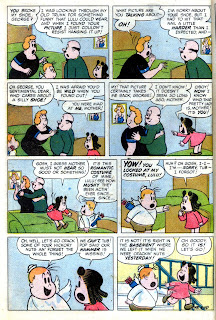 Nothing entirely new here; just Stanley performing like an old pro. The softer use of Halloween elements, as in some of the earlier stories here, is impressive. Just because this is a Halloween special does not mean every story must be crammed with ghosts and witches.

Stanley relates the theme to everyday life, and to how it impacts the lives of his characters. In this case, we get another rich glimpse into the cognitive biases of Tubby Tompkins. His out-of-whack choice of a Cupid costume (for the upcoming H'ween party) and his demand that Lulu not look at him, lest she spoil the "surprise," adds a few new layers of skewedness to the already lop-sided Tompkins psyche.

And all this while Tub solves a suburban "crime" of nostalgic passion! Stanley, via clever variations and chraracter-driven human comedy, gives this forumlaic scenario a welcome new twist.

Never one at home with sentimentality, our esteemed author achieves a surprisingly tender moment between the adult Moppets. (Mom was a bit of a looker in her younger days!)

The best is served last. Here is one of Stanley's truly great pieces of work. I'm convinced that his finest storytelling can be found in the seemingly endless series of stories told by Lulu to bratty Alvin.

It has been argued that they're not pure comix--and that their dense narration might make them hard for today's less literate children to easily comprehend. But they reward careful readings (and re-readings) with a wealth of observational detail, and through the subtle discrepancies between the narrator's version of the story, and the story, as shown in the light-of-day of the comix panels.

Here is a story riven with potentially nightmarish images, yet sharply funny--with a touch of meta-irony (decades before it was hip!) 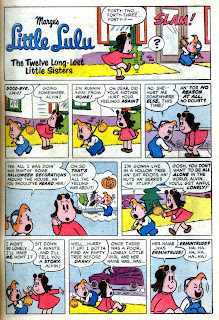 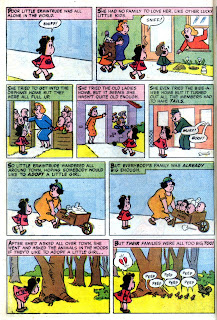 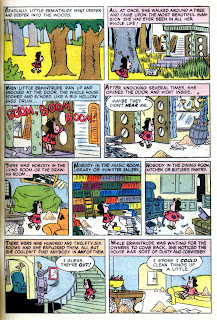 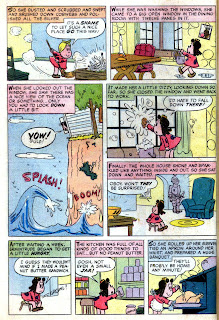 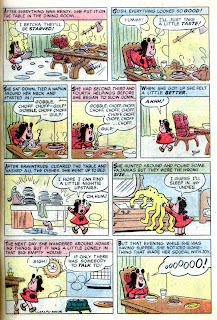 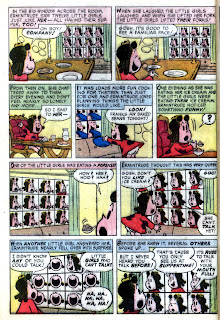 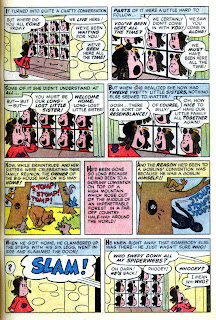 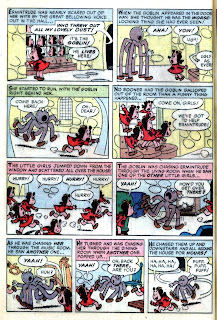 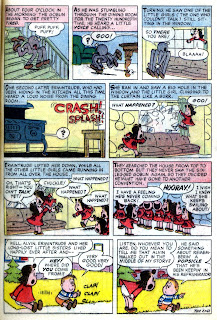 "The Twelve Long-Lost Little Sisters" is among the finest of Stanley's fractured fairy-tales. It crams enough ideas into its nine pages to sustain an entire graphic novel.

The concept of the panes of glass that each contain a different meta-Lulu is stunningly inventive. When one further considers the presence of those window panes as panels-within-panels, and the conflicting varieties of Lulus reflected back to their originator as a manfestation of her character's loneliness, detachment, and desire to belong, the concept becomes poignantly metaphorical.

Yet not a moment of wit or humor is spared. Were it not so funny, this concept could easily be merely disconcerting, or cloyingly symbolic.

I sincerely doubt Stanley consciously posited this as a meta-story, or that he read anything symbolic into it. But those elements are there; they leap off the page (or, in this case, the computer monitor). "The Twelve Long-Lost Little Sisters" is one of Stanley's finest mergers of distancing devices and a jubilant, experimental narrative.

The crowning touch comes at the end, when Lulu descends from her story-telling trance. She finds an entirely different, highly enthusiastic audience for her transcendant improvisation.

There is a faint grace-note of sadness here: I pity Alvin for being such a creature of impulse, and thus missing out on a once-in-a-lifetime story. Poor Lulu! At the end of this bravura creation, she discovers her intended audience has abandoned her on a whim.

This delicate infusion of gloom is a Stanley hallmark. A faint note of melancholy creeps into many of his stories' conclusions. Feelings of regret, betrayal, embarrassment, disillusion and displacement end story after story.

In high contrast to the wildly imaginative flights of fancy in Lulu's tale, this finale grounds both reader and character. For one brief moment, we are fused with Lulu in her abrupt fall from Cloud Nine.

i was hoping you'd get all Halloween-y!...

more and more impressed all the time...

I've been reading your blog for about a year, and your October postings are my favorite. The Little Lulu Halloween stories are just wonderfully funny. I always thought the Witch Hazel stories were a marvelous combination of humor and nightmare, and these eerie, surreal stories somehow strike a deep chord. But above all, thank you for publishing Stanley's horror stories. I read Tales of the Tomb and Ghost Stories when I was 9 and I always thought Stanley was one of the most brilliant horror writers ever. I am so grateful for your generosity in sharing these masterworks!