Howdy, one and all. These are stressful times for me. I'm moving--to a much better and more affordable place, but moving is always stressful. And, as usual, I'm flat broke. Jobs of any kind are nigh-impossible to find. I'm hanging by a slender thread of faith in the universe that I'll make it through this winter.

Thus, my plans to do a lot of posts in October are somewhat hindered. I'll do my best to do a post a week. Thanks for your patience.

Here are the next three stories from the 1958 Little Lulu and Tubby Halloween Fun giant. Today's selections are very Tubby-centric. That is always good news in the Luluverse.

I've been asked to write an essay about characters in popular media with heavy cognitive biases. Tubby is, of course, one of the great examples. I think Larry David's character in Curb Your Enthusiasm and Ricky Gervais and Steve Carell's roles in both versions of The Office have much in common with good ol' Tub.

We are drawn to characters who create disaster via their tenacious hold on warped world-views and askew justifications. I think there is something cathartic about seeing such characters make huge gaffes and disrupt the order of the world around them.

This is especially true when said characters sincerely believe that what they're doing is right--perhaps the only way to achieve their goals. It is a huge societal fear that we will be exposed as someone who has made flagrantly wrong choices, and upset the applecart of routine life via our misinformed decisions.

Tubby's wrong choices don't make my sphincter turn inside out, as do Larry David's or Michael Scott's. Horror movies don't scare me; The Office and Curb Your Enthusiasm both do.

Tub's is a kindler, gentler set of cognitive biases. Speaking of which, let's enjoy the Tubster in action...

"The Frog In The Hat" sidesteps the Hallo-theme, although a stage magician's mystique does border on the supernatural for the kids in this story. Tubby's logic system is a runaway train here, with Lulu its bewildered passenger. 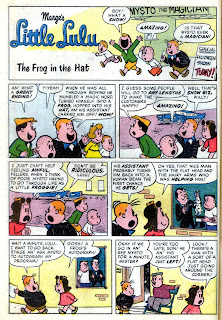 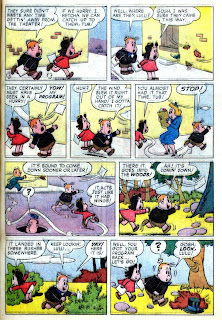 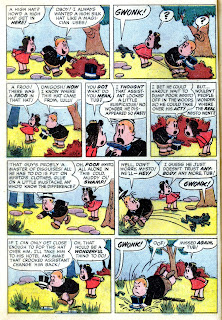 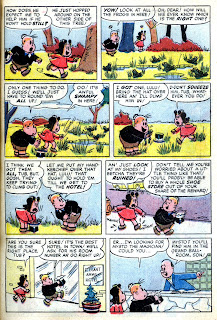 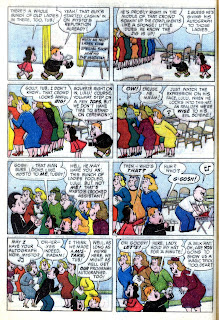 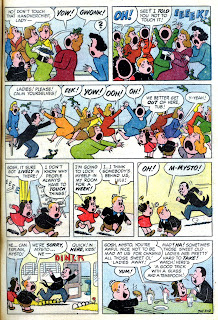 As usual, it's just Tub's overactive, unmedicated imagination, and nothing more. But Tub's belief system rescues Mysto the magician from a horde of menopausal female fans, on whom he apparently has a Tom Jones-like effect.

By simply believing in his misinformed thesis, and following it to an illogical conclusion, Tubby (and Lulu) are rewarded by their most grateful idol. It's fascinating to see Lulu--always the voice of reason and logic--so taken in by Tub's flights of fantasy.

That Stanley's characters are malleable and inconsistent makes them all the more real, appealing and compelling. We want to see what will happen to them. Like us, they are uncertain vessels on the sea of life. They do not react robotically to circumstances.

Tubby edges Lulu completely out of the picture for the next two stories. "Missle Fizzle" offers a fascinating and rare glimpse inside the home of Lulu's best friend, Annie. In many stories, Annie is depicted as a poor child. Her home seems no better or worse than the Moppets' or the Tompkins'. Perhaps Annie's family came into some money in the mid-1950s. 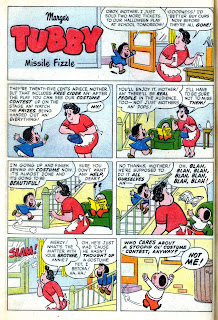 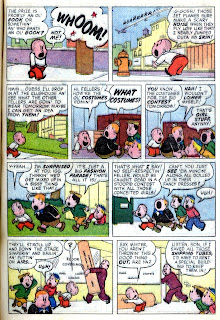 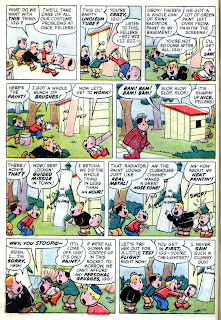 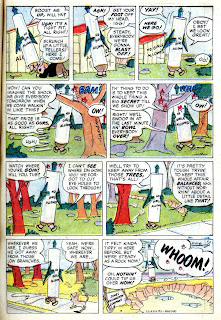 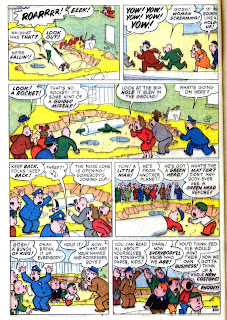 "Missle Fizzle" is built around topical references to Space Age weaponry--an unusual move for John Stanley in Little Lulu. The series, as a whole, occurs in a comfortable vacuum. Their timeframe is a vague "now" that could be any year from 1945to 1960.

The stories seem, im particular, to take place in the prosperous, relaxed later 1940s. It's genuinely surprising to see the intrustions of the present-day in "Little Lulu."

Stanley would aggressively embrace pop culture references in his post-Lulu work. "Missle Fizzle" is a fascinating preview of his 1960s writing.

It is also a brilliantly dense dose of character-driven comedy. Annie's brother, Iggy, instigates the mishaps. For once, Tubby (plus the other "fellers") completely buys another person'a sincere-but-misguided concept.

The rich visual-verbal comedy that ensues is top-drawer stuff. Stanley had a great deal invested in these characters. All that thinking and planning had given him a foolproof foundation to write hilarious and delightfully absurd stories such as this.


Tubby emerges triumphant, in "The Bragging Mirror," against his greatest foe, the amoral, wealthy Wilbur van Snobbe. Wilbur is unusually nasty here. Again, this anticipates Stanley's coming tenure on the Nancy comics. Stanley's treatment of the equivalent Rollo Haveall character, in that series, is among his harshest depiction of the heartless, manipulative rich. 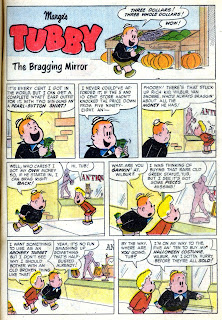 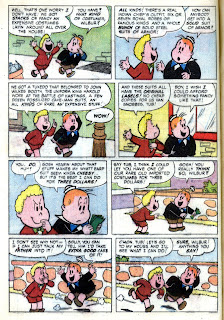 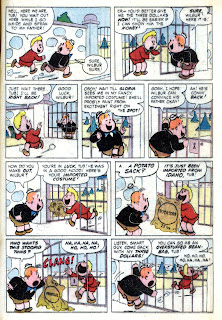 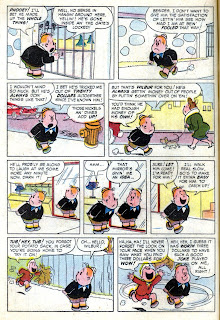 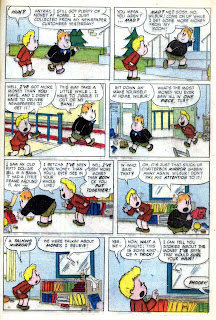 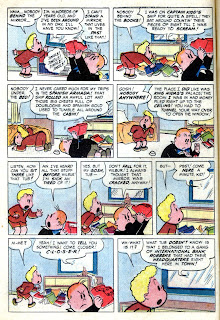 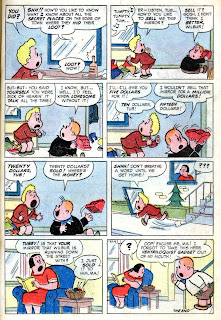 The main situation of this story is gimmicky sitcomix. Stanley just barely gets away with its artifice. You know something's up when Tub keeps his scheme to himself. An egomaniac of his caliber would typically obsess over his scheme, savoring each detail in detail.

Of course, if Tub did that, the story would fall apart. It works because we have seen Tubby try to get along with Wilbur so many times in the past--and has had his sincere efforts trampled and his kindness mocked. As well, Wilbur, who needs no extra money, has duped Tub out of "at least twenty dollars" over the years.

We want to see this comeuppance--especially impressive since it is a no-budget affair. All Tubby needs is his vivid imagination and a "ventriloquist gadget." The latter, seen in many 1940s animated cartoons, comic books and '50s TV shows, apparently was a miraculous device.

The tacit moral of the story is that Tubby, lower middle class kid of no great means, can outfox lazy, self-indulgent, wealthy Wilbur with nothing more than a colorful, clever story. Wilbur is not the sharpest knife in the drawer, despite his social and financial pedigree.

Were "The Bragging Mirror" not so rich in detail, and seated in such a high-stakes unsettled score, it would be just like another 100 dumb funny-book stories. It's to Stanley's credit that he transcends the gimmick with convincing characterization and geniune, well-depicted human emotion.

We'll take a temporary break from this Halloween giant, as I've had requests for some of Stanley's whacked-out serious horror stories of the early 1960s. I'll offer up some of those subconscious wonders next time around.
Posted by Frank M. Young at 9:26 AM

The "ventriloquist gadget" could not perform as advertised, as you probably suspect. It could, however, change one's voice considerably, and is a traditional tool of English Punch-and-Judy men.