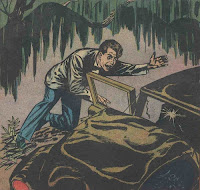 Ah, you’ve returned! Heh, heh, heh! You’re wanting more from Tales From The Tomb, are you?

Well, let’s set up the next mind-fudging batch of stories from this notorious John Stanley effort. It's important that these stories not be read with the expectations of ordinary horror comics.

The effect of these pieces like something like the moment you wake up after a bad dream. You try to put all the pieces together of the brain salad your subconscious has just served up. Important threads--things that would make the dream's events seem logical-- are forever lost. You're haunted with the effect, rather than the actual events.

That's how these stories roll. 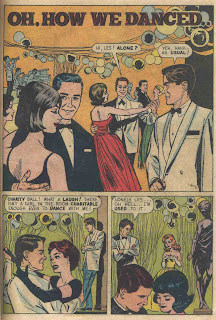 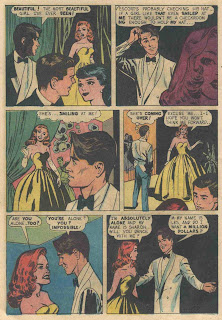 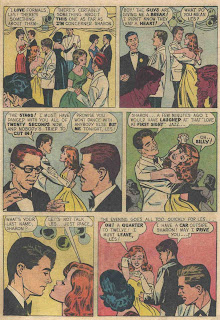 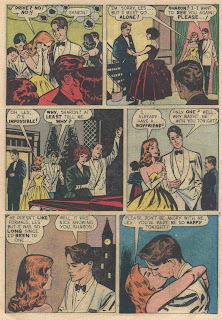 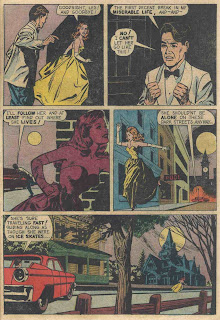 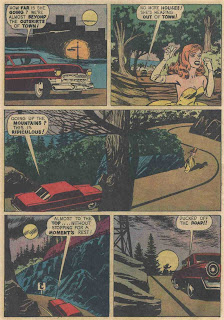 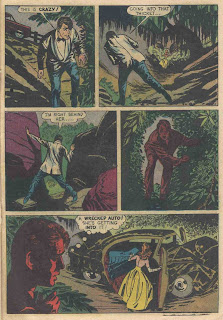 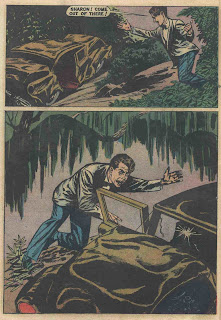 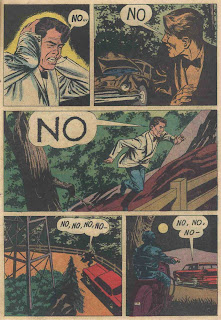 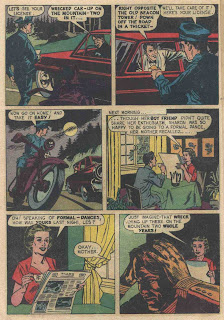 Poor “Lonely Les!” Even Tubby Tompkins fared better when he courted Gloria, so many times, in such utter vain.

The story's next-to-last page, with its repetition of the word "no," is striking in its intense, frenzied despair. Many modern-day comix artists try to create this sense of hopelessness and darkness in their work (which is usually autobiographical). This page comes out of nowhere in the comix landscape of 1962.

“Oh, How We Danced” attempts a haunting atmosphere, which the artist (Ken Bald?) does well with. This is the most impressive and successful story in the book, in my humble opinion. I wish the ending were given another page. It's very breathless, and teeters on incoherence. Again, when viewed from the dream angle, this fuzzy narrative style works very well.

This would have made a good Twilight Zone episode.

Next is a two-page quickie. 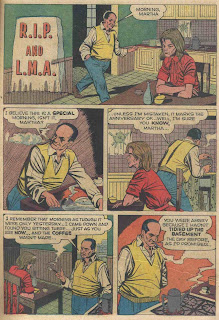 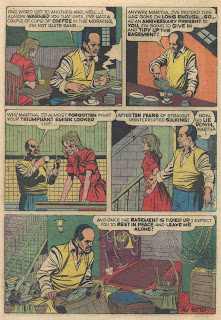 I confess that the payoff to this short-short story makes no sense to me. Perhaps the semi-capable artist forgot something? Perhaps the editor was snoozing? I dunno.

More links to non-horror Stanley Stories here... the husband and wife bear some resemblance to the McOnions of Stanley's Nancy and Sluggo comix.

We conclude today’s broadcast with the appropriately 13-paged work of wonder that is “Two For The Price Of One." 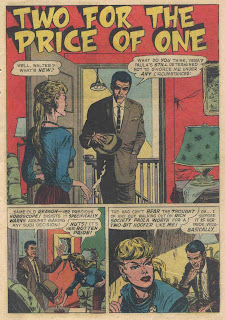 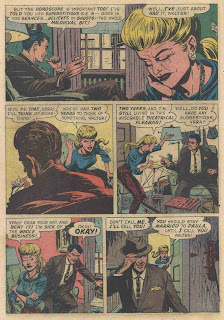 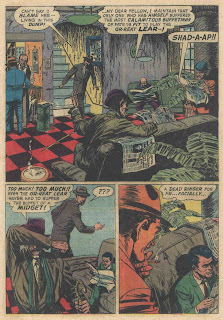 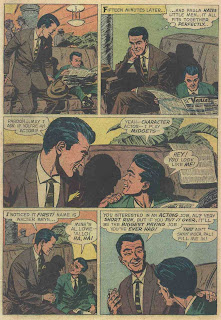 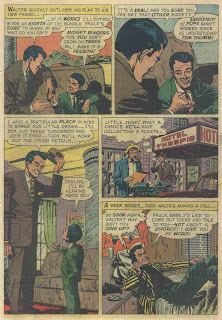 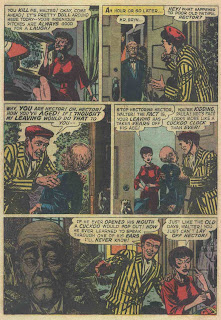 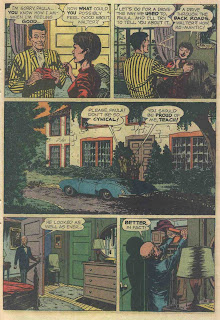 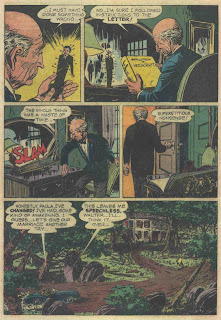 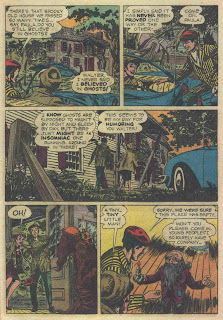 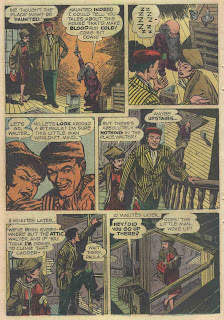 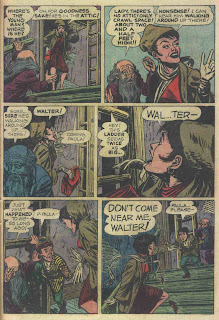 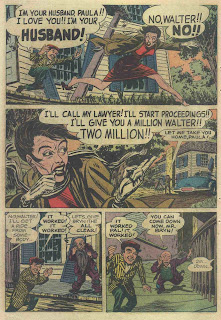 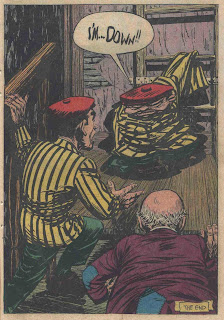 "Two For The Price Of One” has significant thematic ties to Stanley's Little Lulu and Tubby stories.

As a story, it's similar to the improvised tales told by Lulu to bratty neighbor-kid Alvin, in every issue of John Stanley’s Little Lulu.

As well, its plot--of a scheming person seeking mind-fudgery via an elaborately orchestrated hoax--is also cut from the cloth of many a Lulu/Tubby classic.

And, lest we forget, Stanley called upon midgets often in his stories to be deus ex machina figures--to raise stakes or confound the protagonists and antagonists of his stories.

However (and you knew there had to be a ‘however’), few of those deliberately humorous Lulu/Tubby stories could boast such a nutty set-up, married to such a whacked-out, zonky conclusion. Stanley does set it up, with the butler's voodoo doll... but the delayed reaction of the squashing throws a monkey-wrench into the proceedings.

When the a-hole main character assaults the butler, shaking him and insulting him, I'm reminded of Stanley's Thirteen Going on Eighteen. Comedic moments frequently surface in these horror stories, furthering their narrative incongruities.

This is perhaps the most E.C.-like story in Tales From The Tomb. This one begs for an artist of the skill-level of Joe Orlando or George Evans to have illustrated it.

Note the vivid use of comix “typography” in all of these stories. They're written and laid out with real gusto. Stanley wasn’t slacking his way through this project.

Something many Tales From The Tomb stories have in common is their shaggy-dog nature. This story, in particular, is more like a Don Martin Mad Magazine gag piece than a bona-fide horror story.

It does start out in best E.C. fashion. Once the midget angle appears, any resemblance to a traditional horror or suspense story goes out the window. The story's punchline beggars the imagination; it prefigures some of the grotesque imagery of Stanley's Melvin Monster stories.

I must confess that these stories have grown on me as I’ve been posting them. They’re still daffy as can be, but they’re like a force of nature. Just as you can’t tame a hurricane, nor stop a blizzard, you have little choice but to stand back and let Stanley’s horror comix go about their inexorable, zany-dark way.

Coming up next: the immortal “Crazy Quilt”—easily THE most wacky story in Tales From The Tomb, plus other mind-skewering meisterworks!
Posted by Frank M. Young at 4:35 PM

Labels: horror, Stanley in the 1960s, Tales From The Tomb, terror

Thanks a zill for uploading these. I've posted before how much these stories stuck with me, since the copy I wore out when it was first in print so many years ago. So far every panel has been just the way I remember them.

I just wanted to comment on the quick two-pager. The 'pay-off' is that he has covered a grave with a blanket in a corner of the basement, and will bury her there. I think anyway. You can see the shovel and pickaxe in the background of the final panel, which shows the soon-to-be foul play.

Thanks, I really like your work with this blog. Great job!

i think he had already killed her and buried her in the basement but her ghost was still hanging around sulking 'til he cleaned up the damn basement...

After reading the story again last night, I think prof. grewbeard's explanation of R.I.P is the correct one.

The way I read the short I concur with grewbeard. I saw it as the anniversary of the day he killed her and buried her in the basement. Her ghost is there to smirk at him to mark the anniversary. A kind of Poe like story i think.