I thought I'd do some moving today, but it's been postponed 'til next Saturday. I need a break from packing boxes, throwing crap out and walking around my dishevelled apartment with a mixture of bewilderment, depression and disbelief.

As well, it occured to me that readers of this blog who share these comix stories with their children might think twice about reading those freaky horror stories I posted yesterday.

I fear they may have a traumatizing effect on young minds. So here are two more stories from that Little Lulu Halloween special. These ought to make far more suitable bedtime-story material. For our older readers, these may leaven the psycho-weirdness of the horror material.

Here, today, are Lulu and Tubby. Lulu's up first, with another fine fractured fairy-tale, "The Witch In The Moon." 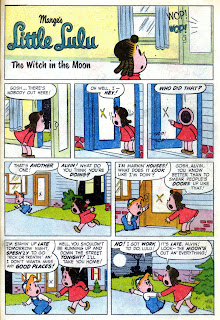 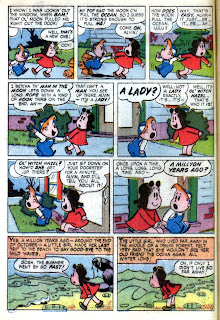 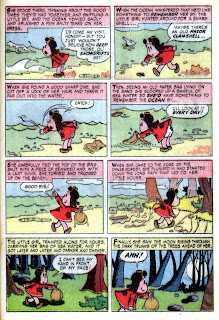 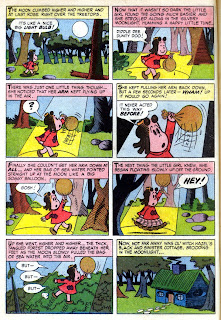 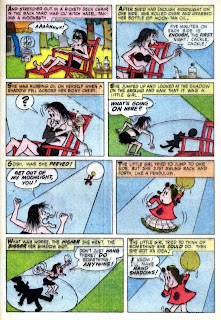 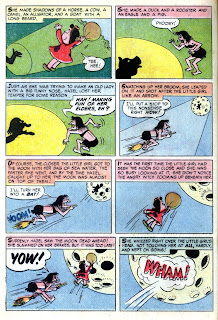 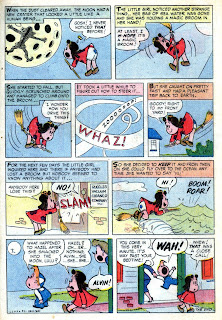 This story can't help but pale in comparison with the brilliant "The Twelve Long-Lost Little Sisters," but it still bristles with charm and sharp humor.

Lulu's interactions with the ocean have a poetic quality that is beautifully underplayed. As well, this story offers the most casual look into the everyday (or, should I say, everynight?) life of Witch Hazel. The sight of her in a bikini is... well... different.

Tubby is the protagonist of "Trick or Treat," which pits him against a common later Stanley nemesis--the borderline-psycho disgruntled male neighbor. Here was a real-life bogeyman suburban kid readers could truly understand. Nestled away in all communities is at least one socially alienated loner-type who's chosen to isolate himself from humanity in general. 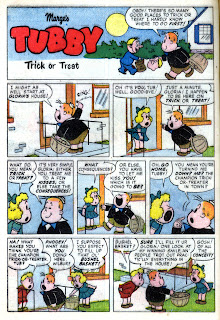 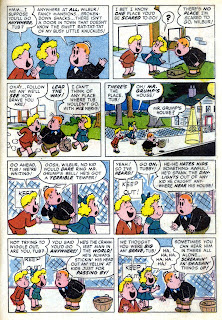 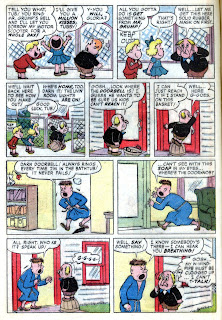 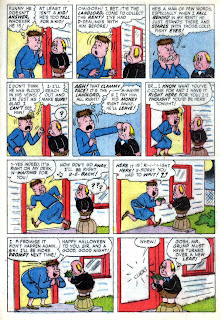 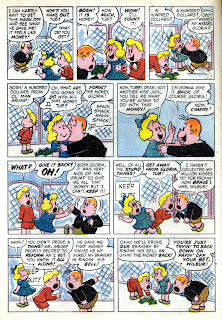 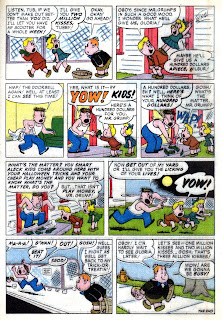 Tubby is a passive hero in "Trick or Treat." He literally does nothing, yet he provokes Mr. Crank into action. As with "The Bragging Mirror," it's pleasing to see the dueling a-holes Wilbur and Gloria get hoisted on their own petards. That said, the final image of them being chased down a dark street by Mr. Crank is a bit disturbing. It's played for comedy, but a genuine sense of menace creeps up to the surface.

Poor Tub will never collect those "three million kisses" from Gloria--a conclusion we're invited to draw ourselves, and which graces the story's closure with a pinch of sadness.

WARNING: Our next few posts will contain selections from the notorious 1962 Dell Giant Tales From The Tomb. Youhave been warned! Heh, heh, heh, heh...
Posted by Frank M. Young at 1:17 PM

a witch in a bikini...whew!

i loved "Forget the money, Gloria!"