We're on the home stretch of Tales From The Tomb...

Today's posting offers two of its freakiest stories, plus one of its most oddly moving and, dare I say, poetic.

Freak flags fly first with the slice of psycho-horror that is "Crazy Quilt." This is THE story from TFTT that most who read it as kids remember with a shudder. Well, just see for yourself... 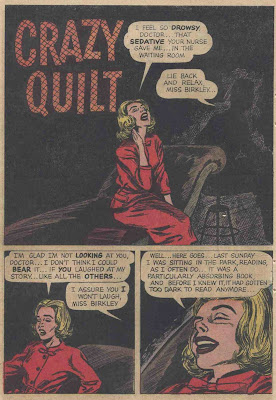 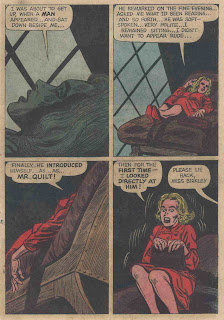 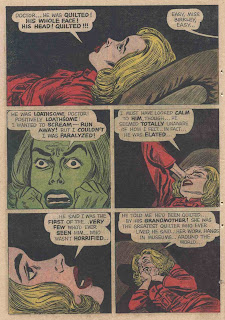 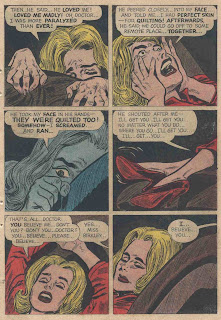 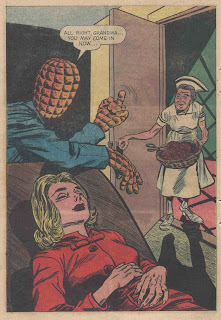 "Crazy Quilt" is, at once, John Stanley's kookiest piece, and one of his most revealing as a writer.

The concept is sheer nightmare lunacy. It is a perfect sort of childish bad dream. Being quilted, in the cold light of day, may not strike a mature adult as terrifying. It might actually be a virtue in colder climates.

But from the viewpoint of a child, to whom the world is a sweltering mass of unknown and untested things, this concept is most potent. The idea that a comforting, warming object like a quilt could become something frightening and dangerous is appropriate for a child's imagination.

For a man who said "I don't believe in therapists and pills," Stanley turns in a stellar performance-in-words via poor Miss Birkley, the protagonist. She twists and turns on the psychiatric couch as she tells her story, rich in details and punctuated... with... synapses. I feel that Stanley sympathizes with her.

Therein, we find an interesting variant on the "you are doomed... doomed... DOOMED!" bit that appears in some of Stanley's later Little Lulu stories, and in the harrowing encounters, in Nancy and Sluggo, between Sluggo and the push-button psychotic McOnion.

The rich attention to detail, in Miss Birkley's theraputic monologue, anticipates the nervous, similarly vulnerable dialog of Stanley's Thirteen Going On Eighteen. Stanley's dialogue grew longer and more intense in the 1960s. This talky trend reached an apotheosis in his last work for comix, the first issue of O. G. Whiz (which you'll find in an earlier installment on this blog).

The villain of the piece, of course, is the psycho-therapist-slash-quilter.

Next is a curiously poignant story with subtle scare elements--"The Cat That Was Part of The Night." 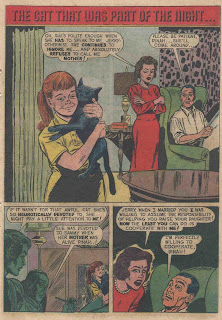 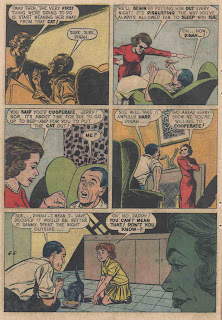 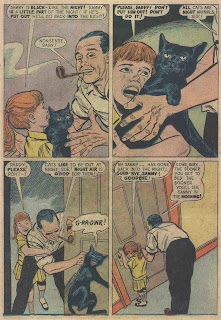 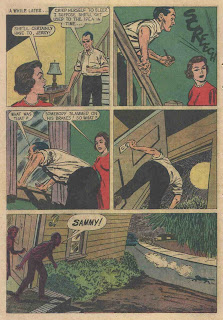 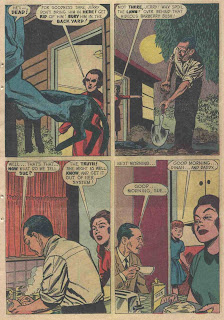 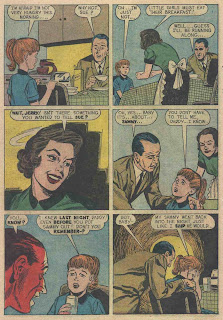 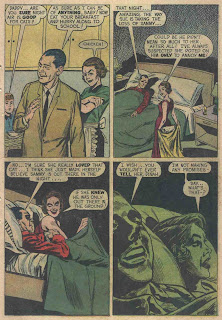 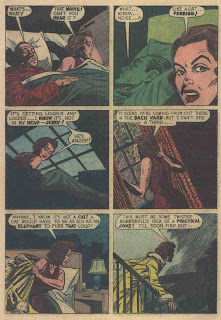 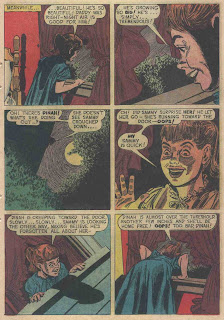 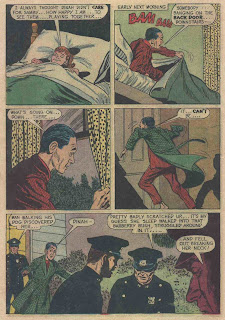 "The Cat That Was Part of The Night" suggests a lost Val Lewton horror movie of the 1940s. It is more about domestic tension and dysfunctional adults than horror, per se.

The most charged moments in the story concern the trauma of separation between the little girl, Sue, and her black cat Sammy.

We've seen a dress rehearsal for this scene in the "Li'l Eight Ball" story from New Funnies #101, which was posted HERE not so long ago.

In both stories, Stanley invests the moment of separation with much drama. He is better able to voice this pain in "The Cat..."
Here, he paints a strong portrait of an effed-up family dynamic. Dinah is a commonly-seen 1960s Stanley character--the shrill harridan whose job in life is to bitch and moan and make the world around her tense.

Dinah and Jerry do not get along very well. Jerry is a passive schlump, while dominating Dinah rides him with gusto. Both adults use the child, Sue, for emotional target practice, scoring indirect but vicious hits on one another in her name.

Sue has retreated into a pacifying bond with her cat, Sammy. She describes him poetically on the story's third page:

"Sammy is black--like the night! Sammy is a little part of the night! If he's put out he'll go back into the night!"

All the supernatural elements in this story occur off-stage. We see them through Sue's eyes. She becomes chillingly cruel as she watches Dinah being shredded to bits by the resurrected cat: 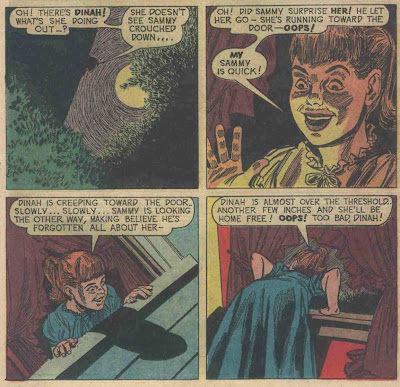 In the cold light of day, police surmise that it was your run of the mill raspberry bush scratch/broken neck combo. But Sue knows better.

"The Cat That Was Part of The Night" is the most powerful and convincing story in Tales From The Tomb. I wish the artwork were stronger. The artist does a sort of pastiche of Jack Kamen, George Evans and that Madison Avenue drawing style of the Space Age. The results are, like much of this book, oddly primitive. Yet they somehow--if just barely--succeed.

Back to Wonkyland for "The Long Wait"-- no relation to the Mickey Spillane novel of the same name. 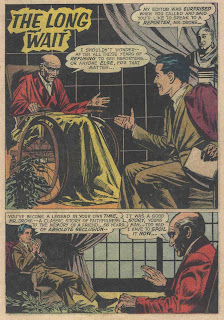 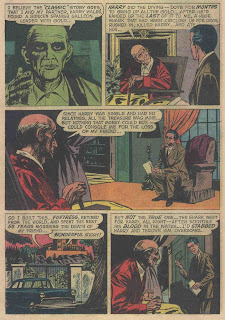 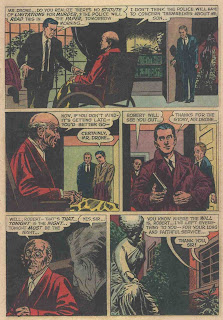 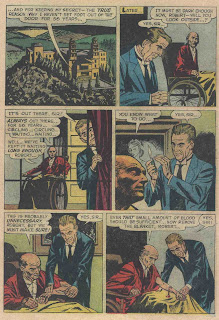 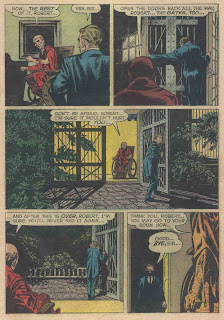 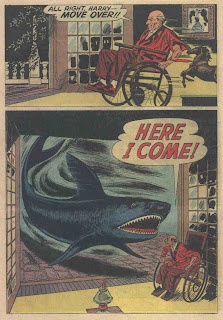 The Tales From The Tomb formula--novel concepts made zany and dream-incoherent--reach their peak in "The Long Wait."

In this story, Stanley calls one of his pet themes--that rich people are no damned good--and gives it a new twist.

Here, we see a very rare instance of a wealthy person (and an admitted scoundrel) willing to atone for his misdeeds. Despite the physical improbability of the story's last panel, "The Long Wait" impresses with its blend of grim ritual and of a miscreant baring his soul and confessing his crimes.

Rich, detailed dialogue fills this story. Mr. Drone's ironic recitation of the "classic" version of his life story, followed by what really happened, is among Stanley's most impressive writing. As well, the interactions of Drone and his man servant, Robert, in a situation usually played for black comedy in Stanley's world, are handled here with impressive gravity.

The concept for the story's shock ending is worthy of the best of the E.C. horror comix. Its shoddy treatment by the artist really robs this piece of its potential impact. As it stands, its blend of grave, affecting dialogues and a kooky finale are par for the TFTT course.

And now, to clear the palate, here's another one-pager, "Goblin's Ball"-- a goldmine of runaway ellipses... 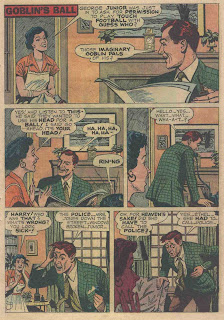 Labels: Halloween, horror, Stanley in the 1960s, Tales From The Tomb, terror

Crazy Quilt presents a very similar situation and punch-line as Stephen King's short story the Boogeyman. King has stated that old horror comics had an impact on him as a youth. I can't help but think he must have read this at some point before writing his own story.