While I had my brittle issue of New Funnies #101 in the scanner, I decided it was high time to preserve the Woody Woodpecker story in that issue. I hope you've recovered, emotionally, from the Li'l Eight Ball piece I last posted.

Today's story was the one that hepped me, back in 1982, to a distinctive quality that I would come to attribute to John Stanley. I'd started collecting New Funnies because it was the only Dell anthology comic of the period that was then valueless. These prime Stanley-driven issues could be purchased for a buck or two, while contemporary issues of Walt Disney's Comics and Stories, Our Gang, Animal, et al, went for 20, 30, or 40 bucks.

Cheapness drove me to New Funnies as a comics-starved college student. But I quickly discovered that a great mind was at work within its pages.

Though fellow writers Frank Thomas and Gaylord Dubois penned similar stories for New Funnies, neither person captured the same droll, dry quality, nor the cramped urban settings that I associate with John Stanley's efforts on the title. Before I became familiar with Little Lulu, New Funnies served as my introduction to his comix work.

Most importantly, Stanley gave his characters a rich selection of what behavioral science calls "cognitive biases"-- fractured logic-systems, created by the mosaic of good and bad experiences we all face in our lives.

The Stanley ur-character is Tubby Tompkins, who embodies nearly every bias on this Wikipedia list. I've discussed the qualities of the central Stanley anti-hero protagonist elsewhere in this blog. Just scan this list and you'll recognize major aspects of the Tubby-type.

Woody, in a much-improved variant of his '40s animated cartoon persona, is a fringe-dweller in a rough, heartless urban world.

He drifts from place to place--nothing steady under his feet except the pavement. Like the screen Woody, he's an impulsive being,easily seduced by whims, wherever they lead him. Unlike the movie Woodpecker, he lacks malice, unless sufficiently provoked by a genuine nemesis.

He's content to wander through the world--sometimes as an adult, sometimes as a schoolboy. Most often, as in this story, Woody is a man-child--completely out of step with the cares and goals of the bustling, anxious world around him.

In this story, simply by following his assumptions, and believing in them, Woody goes places and does things--but ends up where he started. Well, read it and see for yourself... 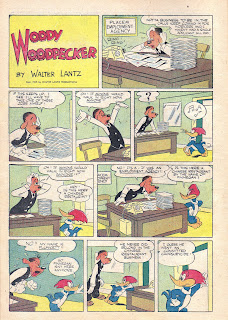 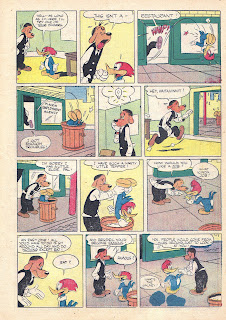 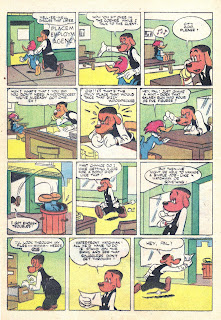 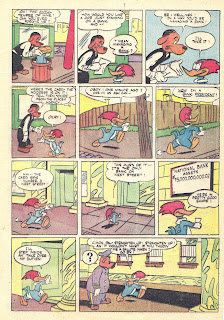 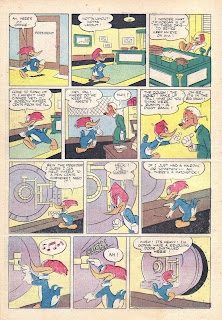 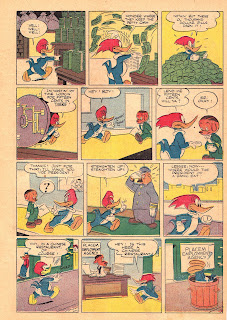 This is a beautifully constructed story, full of status shifts and neurotic human behavior. I pity poor Plunkett, the harried employment agency owner, with his passive-aggressive outbursts, and his sad mantra, "I got enough troubles!"

Woody's free-associative, innocent actions in this story remind me of Bill Griffith's 1970s Zippy the Pinhead pieces. In those stories Zippy beatifically wandered in and out of other people's angst-ridden struggles, was endowed with authority, wreaked havoc without an effort, and exited, stage right, no worse for the wear.

Woody hasn't Zippy's skill at spinning non-sequiturs and Spoonerisms. He is quite good at misinterpreting others' verbal signals, making rapid assumptions, and changing course, based on those wrong guesses.

Via Woody, Tubby, Loo and other anti-social characters, Stanley indulged in anarchic behavior on the printed page. I love the sequence of Woody opening the bank vault with a match-stick, then rifling through piles of large bills, in search of 15 cents, which he ultimately borrows from the errand boy!

The idea of wealth is meaningless to Woody. Getting pocket change for lunch at a Chinese restaurant is what he really wants out of life.

Status is king in Stanley's world, and via Plunkett's misinterpreted endowment, Woody assumes the role of a bank manager. Without question, he's accepted by the other bank employees. Were he capable of remembering where he was, and staying with his impulses, Woody could probably remain the bank's president, and retire a wealthy woodpecker.

Personal note; I wish real-life employment agencies were as active as the Placem outfit in this story! Seattle's temp agencies just ain't hiring these days. Where are the real-life Plunketts when a feller needs 'em?
Posted by Frank M. Young at 9:17 AM

I recently came across your blog and have been reading along. I thought I would leave my first comment. I don't know what to say except that I have enjoyed reading. Nice blog. I will keep visiting this blog very often.

Very interesting article. Well when there is so much a new. Many thanks, for the information