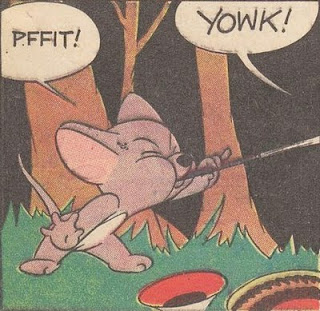 While not all the 100 posts on this blog are "real" posts (some are political endorsements, some are citations of Stanley-related posts on others' blogs, some are self-promotion, and promos of outstanding print and media products), there are well over 100 complete stories by John Stanley, available for all the world to enjoy, on this blog.

Here's a new discovery (as of yesterday), and one of Stanley's earliest comix efforts--an untitled "Tom and Jerry" story from Our Gang Comics #5, May-June 1943. Our hero had just entered the world of comic book writing this year.

Stanley's earliest stories have elements of his later work. At this stage, each new story was a laboratory for their author to experiment with timing, onomatopoeia, character motivation and dramatic stakes. They seldom achieve the casual sophistication we see in his classic period (1948-1956). As with Barks' early work, Stanley's first stories are so much better than most of their contemporaries that it's easy to forgive their small faults.

With the "Tom and Jerry" series, Stanley had his first taste of writing with an ensemble cast. This was a fine set-up for on-the-job learning. Stanley had much to choose from: the dynamic between Jerry Mouse and his diaper-clad cousin Tuffy; the dynamic of each mouse with the proto-Tubby character of Tom Cat (who swims in a sea of cognitive biases, in classic Stanley manner); the relationship of Tom with the stereotyped Afro-American maid, Dinah; and, most importantly, the uncertain relationship of the two mice and the giant, unknown world that expands around them beyond the horizon of their consciousness.

Stanley would hone this multi-level relational comedy to perfection in his long run on Little Lulu [1945-59]. In these simple, straightforward cat and mouse stories, that skill was first developed and worked out.

I make no claims that this is a great story. It is energetic, funny, and leavened with some surprising, wild details. Read 'n' enjoy; then we'll talk. 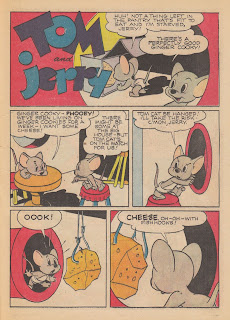 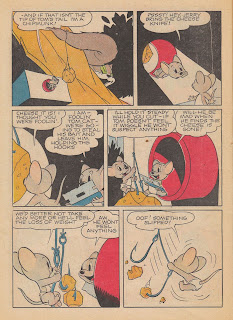 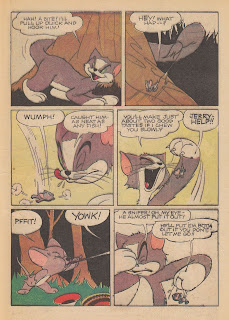 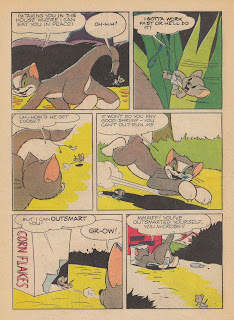 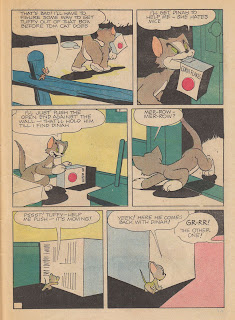 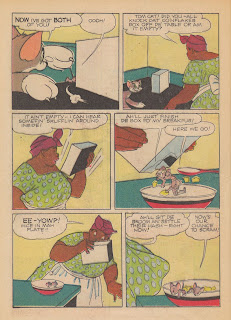 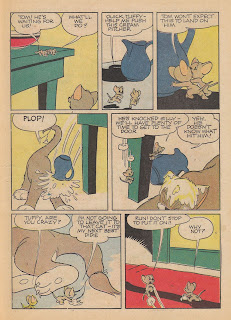 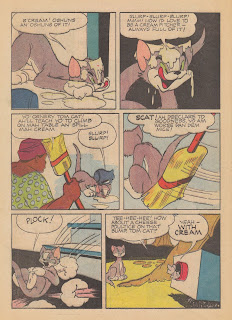 Standard predator and prey antics are common material for the funny-animal genre. This may be the first such series to invest its characters with some semblance of personality flaws, skewered world-views, and a margin of believability. Stanley's reinvention of the MGM cartoon series is so much better than the largely witless, barbaric Hanna-Barbera animated version.

This was Stanley's standard MO when given licensed properties: pick out the crap (roughly 87% of the original version) and hone in on the remaining 13%; bring those elements to the fore-front, elaborate on them, and, in the end, create a secondary version that outshines the original.

Stanley did this with the Walter Lantz characters, with Famous Studios would-be stars, with MGM characters and, according to his own claims, with Warner Brothers' already A-OK Bugs Bunny, in two Four Color 1943/4 one-shots. (I do not believe Stanley really wrote the two Bugs Bunny FCs he claimed in his resume-- issues 33 and 51. There are no Stanley "tells" in them whatsoever; they appear to be the product of Dell's California offices, which routinely handled the Warner Brothers licensing.)

Early in his comix career, Stanley trafficked in racial humor and stereotyped images--as did his peer and friend Walt Kelly. After that final "Li'l Eight Ball" story (which ran here a post or two ago), I don't recall any further Stanley uses of Afro-American characters. In fact, I believe they are completely absent from his post-1947 comix work.

That is a facet of the current popularity of Little Lulu, via those Dark Horse reprint books. There's nothing that un-PC about the stories. (Well, there are the parent-to-child spankings, but I'm sure there are still some parents whose parenting procedure involves this barbaric ritual...)

Carl Barks, who only seldom trod into un-PC territory, has had all the "objectionable material" deleted from his work by those history-revisionists extraordinaire, The Disney Corporation. His handful of stories with Afro-American characters were usually set in Africa, or the Middle East.

(The same fate has met some of his stories with Native American characters, which are much more plentiful. For a truly repugnant reading experience, try the 1980s Gladstone emasculation of his 1950 gem "Land of the Totem Poles." Disney censors rewrote the NA dialogue to read like all parts were played by Ronald Colman and C. Aubrey Smith. It's an object-lesson in how to completely destroy comedy via tampering.)

All this said, Stanley did the best he could with what was required of him. Dinah, in this story, is an active figure in the narrative. She doesn't just have things happen to her; she takes part in what's going on, and affects the outcome of the narrative.

That still doesn't make the visual treatment of Dinah any less upsetting. Oddly, the MGM cartoons chose to [almost] never show the maid's face. As with the parents in Sheldon Mayer's later Sugar and Spike episodes, she's seen only from the mid-torso down.

My guess: that Stanley rightfully realized this would seem weird on the printed page. To make the character a congruent part of the narrative, her face--and facial reactions--needed to be seen by the reader.

He could have done far, far worse--examine the "Tom & Jerry" stories by the anonymous, primitive artist who succeeded him for proof of how wrong this could go.

By far, the finest moments in this story occur when Stanley goes out of his way to stop the action, for the sole purpose of giving the characters added dimension. E.G., this lyrical moment in which Tom Cat rhapsodizes about his favorite high-lipid liquid:

Ditto this TMI moment, in which Tuffy retrieves an essential personal belonging:

Stanley achieves comedy brilliance here. Not only for the info that the garment is Tuffy's "next best didie," but that, in flight from the pee-oh'd feline, he tries to put the diaper back on.

Just bringing to our attention the fact that:

1) a cartoon mouse, clearly able to control his own BMs by now, would long to wear a diaper, in the first place
2) that said mouse owns several different pairs of diapers;
3) that said mouse has his didies ranked, according to a personal code of quality;
4) that his first impulse, even in a life-threatening moment, is to put his diaper on

John Stanley goes far, far beyond the call of duty, in the midst of an alleged "kiddie" comix story.

Moments such as this, in which we get a strong glimpse of an actual inner life and personality on the part of two-dimensional comix characters, distinguishes Stanley's work from even its earliest moments.

There is no good reason, in the traditions of the comic book industry, for precious panels to be squandered on such details. By doing so, Stanley raised the bar on comix writing and mass-media comedy. This is why Little Lulu was a major success as a comic magazine--and one read by adults and children alike.

Without these little details--the loving depiction of quirks, tics and personal biases--Stanley's characters would be just like the majority of witless, soul-less funnybook figures.

We can still learn a great deal, even from John Stanley's earliest efforts.

Let me be the first of, I hope, many, to congratulate you on your 100th post! A good one, too. Sometimes, examining the more basic early work of a great creator can shed a lot of light on their more complex later work. I enjoyed both the story and your insightful analysis. This blog was the inspiration and model for my own blog on Jack Cole. May it live on, and on!

Funny stuff! Keep at it, Frank, lovin' every post!