I've only posted three of these "Peterkin Pottle" stories in almost two years of this blog. I kept thinking I'd run this one already, but a search of the site shows otherwise. (To quote the sketch comedy show Little Britain, "the computer says no.")


I was reminded about Pottle from a recent re-reading of several "Herbie" stories. "Herbie" is the Green Acres of comics--a happy accident that is great despite itself, and which slung some of the most avant-garde images of the 1960s into the mass market.


"Herbie," created by Richard Hughes, staff writer of the slightly sub-standard American Comics Group, and doggedly illustrated by Odgen Whitney, is one of the most genuinely odd mainstream comic book creations. John Stanley's "Peterkin Pottle" is a precursor to "Herbie." That said, I doubt Hughes ever saw the feature during its short run of 1949.


Both features star an overweight, bespectacled outcast who isn't much liked by his peers, parents or authority figures. Unlike Herbie Popnecker, Peterkin Pottle is just an ordinary child, with nothing extraordinary except for his over-active imagination.


When the world's cruelty is too much to bear, Peterkin retreats into broad, Munchhausen-style daydreams. As I've noted here before, his fantasies are droll parodies of pop-culture cliches. They can be quite violent, with mass murder and nightmare imagery.


Stanley never quite got the hang of "Peterkin Pottle." It was too violent and bleak for kiddie comics, and Stanley vacillated between charming and harsh humor. This, the third story in the series, falls somewhere in the middle. While Pottle is obviously the kickball of the neighborhood boys, he has some security in his friendship with the girl, Pam. She is much harsher towards him in later stories, but here she is an accepting, indulgent figure.


Pirates figure in many of Stanley's Little Lulu and Tubby stories. They are usually figures of fantasy, unlike magicians, who occupy a similarly special berth in Stanley's comic-book universe. They are threatening, uncertain figures, guaranteed to bring chaos into the mix.

Stanley's covers for this series are all winners, despite the mixed lot of the stories they support. 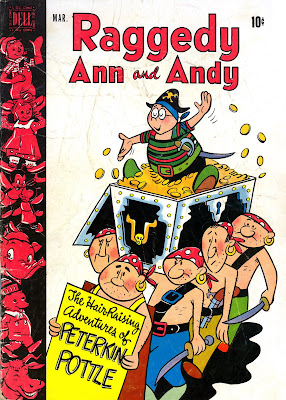 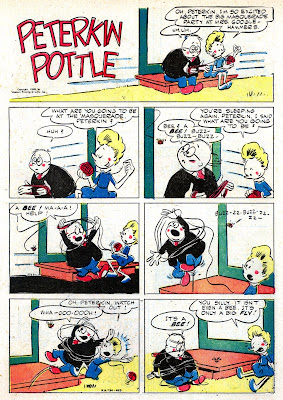 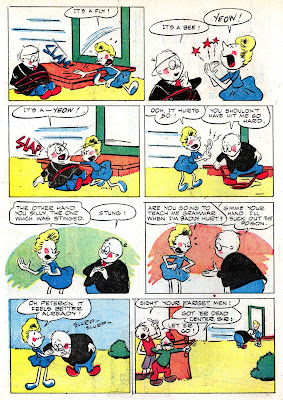 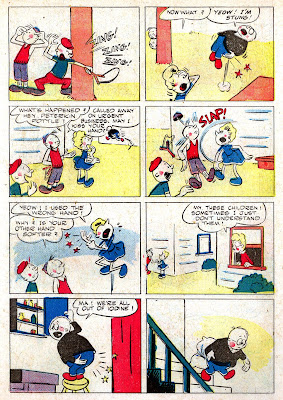 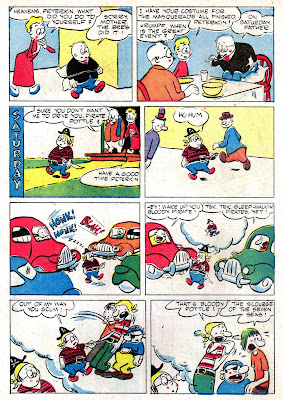 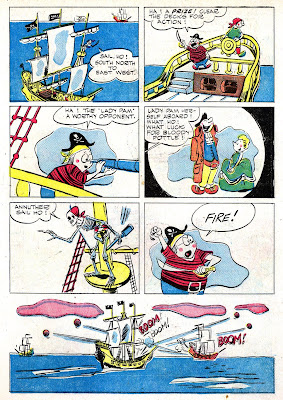 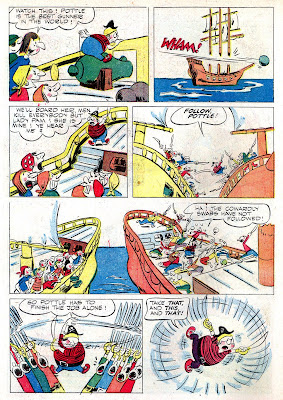 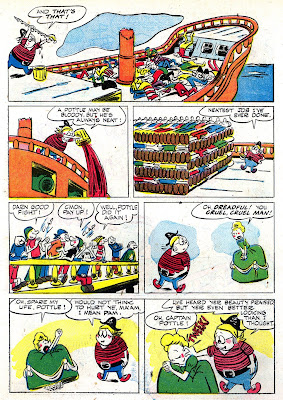 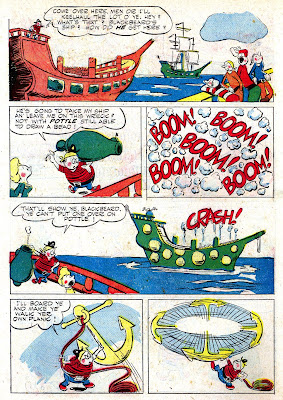 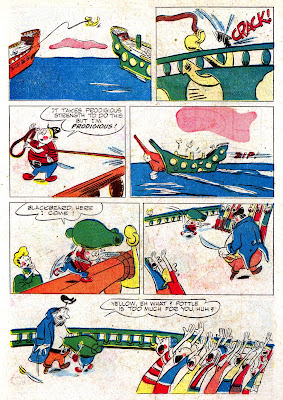 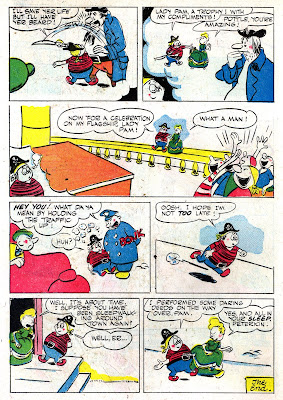 This is a genuinely charming and funny story; it's the best of the seven "Pottles" published. It's ingeniously presented in two acts. The first is a rowdy comedy of child-life, with attention to linguistic detail, strong dialogue and good staging of events. I particularly like the third tier of page three. Its one-two stroke of the kid's smart-ass comment, and the bewilderment of Peterkin's mother, is dead-on.

The story's second episode is the most appealing of Peterkin's daydreams. Stanley frames it sublimely; a drowsy Pottle wanders through moving traffic, sleep-walking through a vivid, lightning-fast reduction of every Warner Brothers pirate movie of the 1940s.

Peterkin is Herbie-like in this fantasy sequence. He's much more egocentric, talkative and flashy than Herbie, but he is effortlessly capable of any feat he wishes to do. Like Herbie, Pottle is recognized and admired by everyone in the story--even the alleged villains.

Although Pottle performs another mass-slaughter (as in the frontier-drama burlesque of issue 33, which I'll run here eventually), his prissy tidiness in stacking the bodies like cordwood, and then wringing blood from his sword, leavens the grimness of the moment with welcome, absurd humor.

It's interesting that Pottle imagines "Lady Pam" as his greatest sea-faring foe ("a worthy opponent"), he holds her in high regard, as in real life. Pottle's affected pirate accent would be an imitation of actor Charles Laughton, I hope.

When Peterkin comes to, roused by honking horns, revving engines and a bellicose street cop, he isn't humiliated. He regains the cool of his fantasy alter-ego at story's end. His eccentric behavior is fully supported by real-life Pam. One hopes they both have a good time at the party.

Stanley's cartooning is a bit rushed here. The vigor adds great energy to the story, but it's still sloppy work. Perhaps Stanley had to work fast, as a rule. Even his 1960s cartooning, while much tighter, often looks like it was done PDQ.

When "Peterkin Pottle" works, as in this story, it's easy to see how good the basic concept was. It's too bad Stanley wasn't given time enough to develop the series--as he was with Thirteen Going On Eighteen. The latter was the luckiest break of his career. A good idea was given enough time to become great.

Had "Pottle" succeeded, Stanley's career path would have changed, and he might not have written his greatest Little Lulu stories. As it stands, "Pottle" is part misfire, part inspiration.
Posted by Frank M. Young at 5:42 PM

Thanks for sharing such a lovely story. I think it might be worth some publisher's while to collect all 7 (?) of the Pottle stories into a single volume and hire you to write a nice intro and accompanying notes. The Pottles left me cold when I first read them, but I must admit they are growing on me. I liked the pirate adventure very much. I loved how how Pottle blasts 3 masts at once and makes Swiss cheese out of a ship's hull. The humor here, and the way the images run as a kind of secondary, parallel storyline reminds me very much of Lulu's fantasies that she spins out to Alvin. In any case, how great that Stanley built up a significant body of stories that pay tribute to the fertile realm of children's imaginative fantasies without being treacly.

WOW! I did read the Pottle stories when they were new and I was 6 years old. I remember searching comic racks for more after the series was inexplicably terminated. Your hunch is right: I was and still am "sensitive" and introverted. Thanks to comics like this (among other influences), I chose writing as a career. What a pleasure to see Peterkin again after more than 60 years! THANK YOU.