"Rootie Kazootie" was, like "Howdy Doody," a early live-action puppet show success. It ran from 1950 to '54. Although phrases from the show, such as "gosharootie," still linger in our lexicon, the program itself is just a vague memory to aging Baby Boomers. (YouTube should have excerpts, if you're really that interested.)

Rootie was popular enough to have a slew of Western Publishing-created merchandise. He also starred in the first issue of Dell's sole 3-D title, imaginatively named 3-D-ell. (FOLLOW-UP: I've just seen this book. It contains no Stanley material. It's made of Viewmaster-style photos of the show's puppets, with crude cut-out SFX. Another one for the recycle bin, alas...)

File these factoids under "Information, Useless." Stanley's involvement with the six Kazootie comics Dell published was apparently shared with other writer/artist creative teams. Stanley's efforts, loaded with tells, have artwork by Dan Gormley (which is, itself, a tell). Three of the six issues were "Four-Color" tryouts.

When "Kazootie"-mania ebbed with the show's cancellation in 1954, so did the Dell funny-books.

Like the Howdy Doody comics, these are not major works. The fact that they exist is a surprise to me. Only this morning did I succumb to curiosity and download the four available scanned issues of Kazootie. I've been down this road many times in the course of my research; obscure Dell title looks promising; download-download-download; peruse; realize contents are lifeless twaddle; move to Recycle Bin; click EMPTY.

This time, it paid off. I repeat--this is not first-rate John Stanley material. There are several thematic ties with Stanley's contemporary work on Little Lulu. Plus, there are these stylistic tells:


And, most importantly, these are narratives that (a) have stakes; (b) are amusing, with literate dialogue; and (c) actually go somewhere, in a satisfying manner.

Rootie is as bland as (if not blander than) Howdy Doody. Stanley does what he can with the material, but the only characters he can really sink his teeth into are the villains, which display many vivid traits of Stanley's Terrible Thwarter/Obstacle archetype.
Here's an untitled story from the third Kazootie comic, "Four-Color" #502, published in 1953. 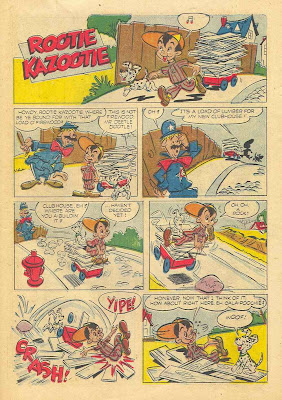 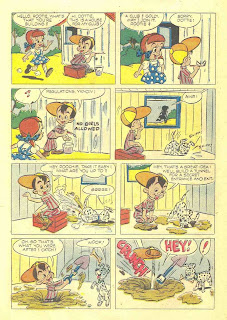 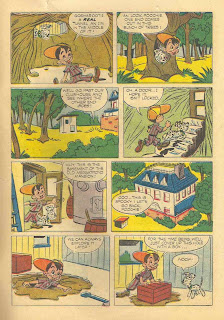 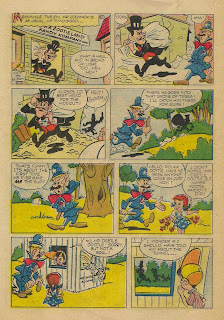 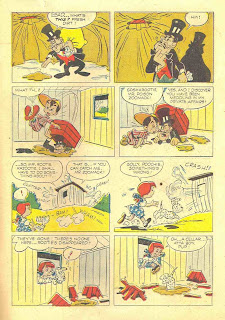 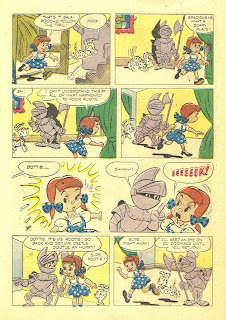 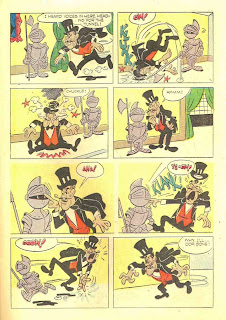 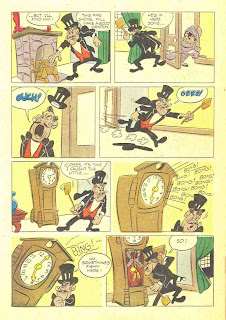 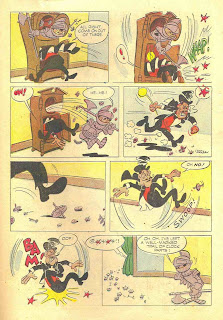 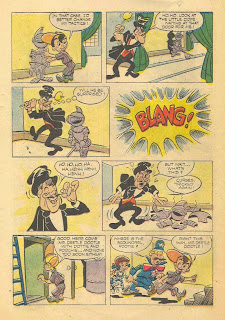 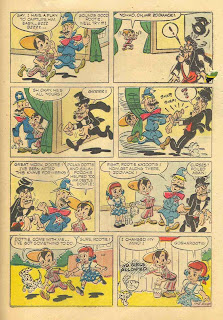 As with the Howdy Doody comics, a TV puppet is brought to comic-book life--no strings attached. Rootie's "Magic Kazootie," the character's chief gimmick, is nowhere in sight here.

The clubhouse thing is a no-brainer tie-in with the Lulu family comics. The narrative twist of the secret tunnel that leads to the an abandoned mansion is a stronger dose of Stanley's imagination. This type of subconscious, near-nightmare imagery hooks up with such Stanley stories as "The Guest In The Ghost Hotel" (Tubby #7). It also connects with the dozens of "Lulu" and "Tubby" pieces that include abandoned houses, which are usually considered haunted by the kids who prowl through them.

Another Stanley tell occurs on page 8, when the grandfather clock bongs 11 times in a row--with each bong given an exclamation mark. As a writer who loved crowd scenes, Stanley applied the same dynamic to his sound effects. He filled his panels, when needed, with aggressive SFX. Whether they are the jagged-lettered BLANGs, BAMs and KLUNKs that pepper his panels, or the en masse outbursts of people or appliances, Stanley's SFX are in the reader's face, inviting them to feel the noise and accept the frenzy.

Here's another "Rootie" story rooted in the principles of Little Lulu--from the first Four-Color book, #415, from 1952: 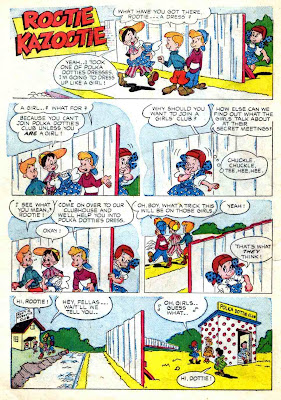 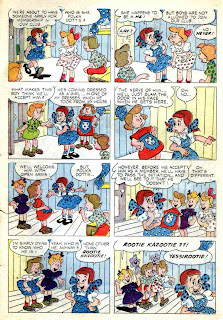 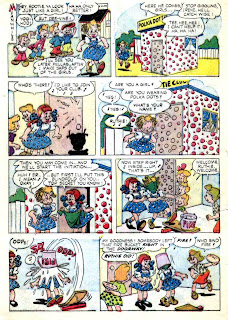 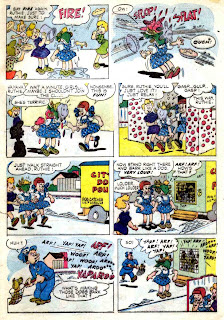 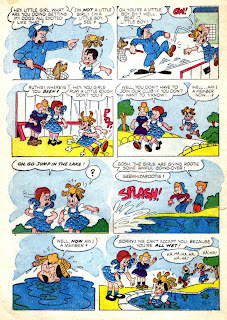 In another story from these three "Four Color" trial issues, there's a simulacrum of Lulu's feared West Side Boys--the alpha-kid a-holes who exist to create trouble for Tubby and his clubhouse pals. Here's a sample page that shows the rival "Tough Guys Club," with Polka Dottie doing a "Lulu": 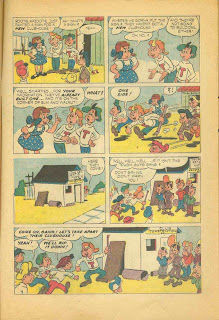 Stanley obviously did not reinvent the wheel here. He took formulas that worked for Little Lulu and recycled them to fit this somewhat similar licensed property.

In today's final selection, from the second "Kazootie" (Four-Color #459), Rootie is a real asshole. He's endowed with the Tubby-Type characteristics, to which Polka-Dottie plays the traditional Little Lulu role.

The cramped urban environment of this story is right out of Stanley's Lulu as well. 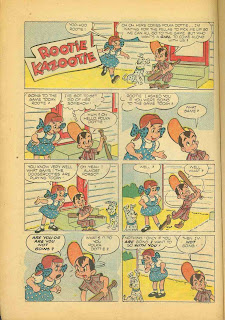 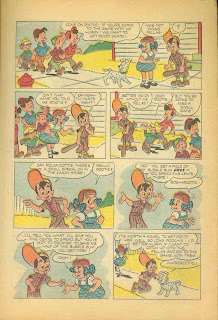 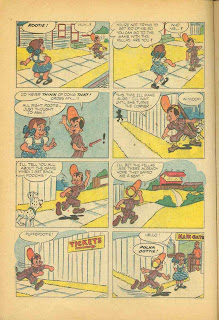 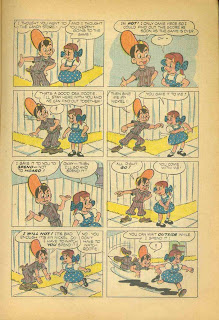 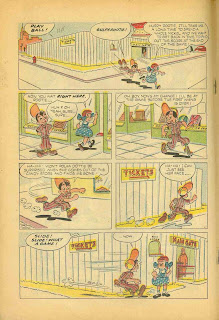 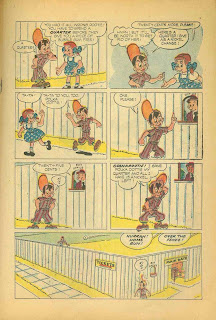 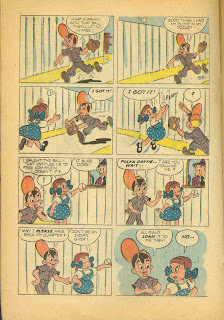 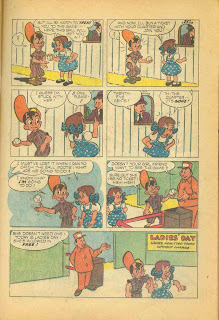 Fences are a common sight in Stanley's 1950s stories. They exist to keep things away from both protagonists and antagonists, as a means of shelter or transformation, and as a dramatic stakes-raiser. This story offers an intriguing combination of the boys-vs-girls business and the use of a fence as a narrative booster.

Rootie is put through the paces for his Tubby-esque behavior by Polka Dottie, who turns the tables on him, status-wise. Yes, it's Lulu-Lite, but the thematic ties to Stanley's more significant '50s work cannot be denied.

By the end of the 1940s, Stanley's page layouts were typically four tiers, with two panels per tier. The rhythm of his best Little Lulu work belongs to this less open, more snappy presentation.

As noted earlier, the Kazootie comics were clearly sub-divided to a few creative teams. The other creators used unusually airy, open three-tier pages. One of these teams elected to emulate Stanley's fairy-tale format from Little Lulu. In each issue, Rootie tells a story to his dog, Gala-Poochie.

Stanley's eloquent fairy-tales are both remarkable narratives and witty extrapolations on the tropes of story-telling. These faux-fables are heavily moralistic, and take great pains to underline said moral at the conclusion. They are not first-person stories. There is no tongue in cheek; the protagonist is forced to conform to the narrative's moral. There is no playful discrepancy between the narrator's version of the events and what is shown in the panel itself.

It is fascinating to see another comics creator attempt to write like John Stanley--without getting what made Stanley's work so compelling and distinct.

The most solid stories in these comics function as a shadow of the Little Lulu universe. Stanley and the other writers play with the "Magic Kazootie" gimmick, but those stories are typically less fulfilling than the non-fantasy elements of the three stories I've presented here.

Who knows what will turn up next? It's clear that the 1950s were not entirely about "Little Lulu" and "Tubby" for John Stanley.
Posted by Frank M. Young at 7:07 PM

Just found your Stanley's AMAZING work and review!!
Thank you for keeping these FUNNY comics alive!