Animals and insects figure heavily in this quartet of summer-camp stories from the second Little Lulu summer-camp giant, published in 1958.

That stellar human animal, Tubby Tompkins, leads the way in our lead story, "The Well-Blazed Trail." 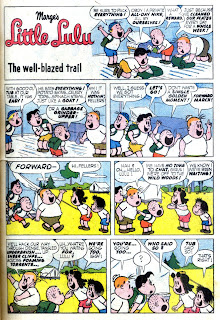 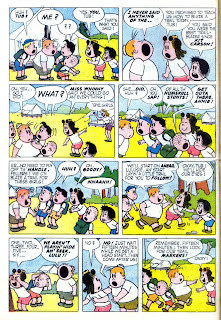 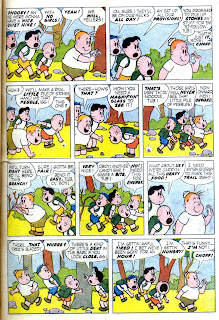 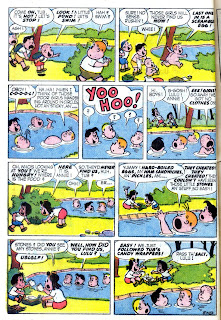 Essentially a punchline with a story built around it, this four-pager exploits Tubby's me-first attitude. Whether he's denying the other guys access to candy bars, or leaving deliberately lousy trail marks for the girls to follow, Tub is aggressively himself here. By simply being himself, at his most uncensored, Tubby undoes his own attempted trickery.

Next is "The Spider and the Messed-Up Bed." Can you crack the mystery before Tubby does? I'm sure you can... 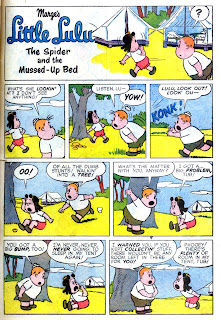 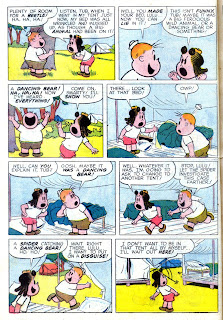 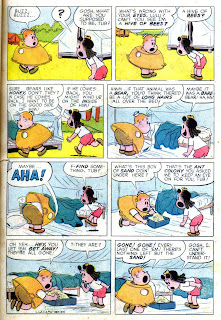 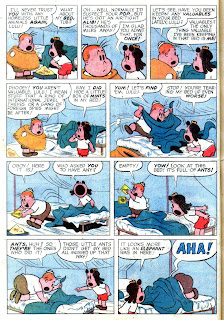 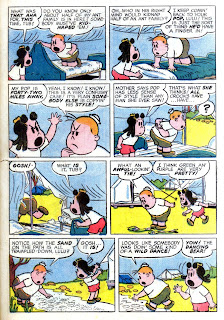 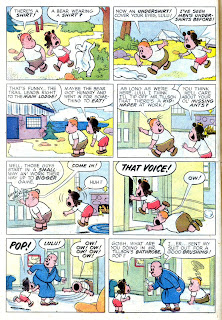 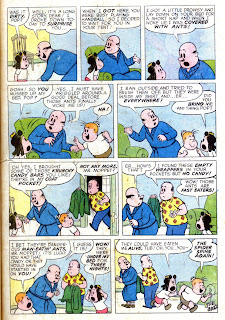 Yep; it's always Lulu's father who is the guilty party in these "Spider" mysteries. The humor builds as Stanley creates a situation that, for once, might not involve Mr. Moppet. It goes on long enough that the reader almost believes it could be a non-human creature.

This situation is, for once, actually caused by Tubby. I'd like to know why he felt he had to hide the ants under Lulu's bed. But that would be asking too many questions...

"Twinkle Toes" is a comedy of human folly starring Lulu. It also features the only-seen-in-these-camp-comix, female version of Tubby, albeit it in a minor role that doesn't affect the story's outcome in any way. 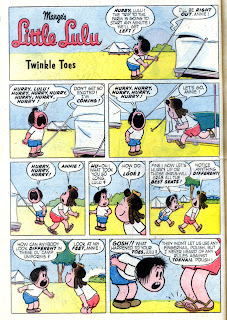 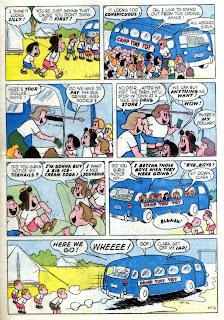 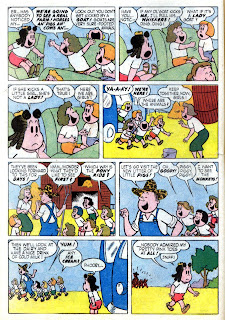 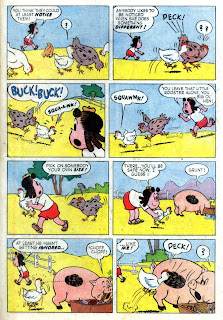 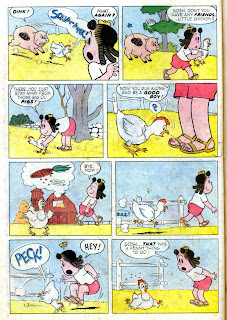 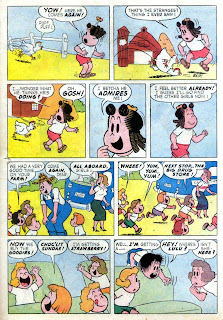 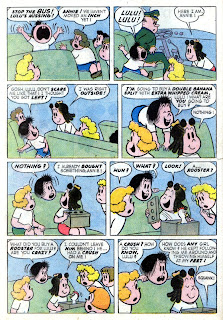 Several interesting elements in "Twinkle Toes:" farm animals as an active force in the story's events; the girls' eagerness to get to the "big drug store;" a pig eating, with a "CHOFF!" balloon; and, best of all, Lulu erring on the side of Tubby. She so wants to have her painted toenails admired that she misinterprets the chicken's OCD behavior as fascination.

Lulu is so often cast as the faultless heroine of her own stories that it's refreshing to see her with feet of (gaudily painted) clay.

Bookending today's allotment of summer-camp stories is Tubby, in "The Chocolate Chicken." 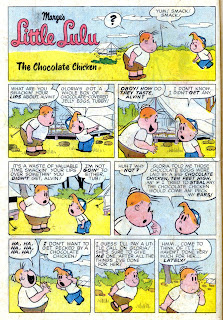 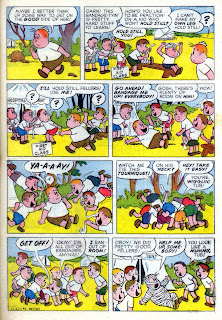 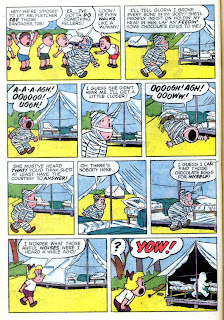 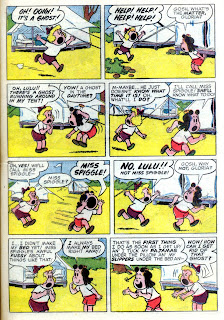 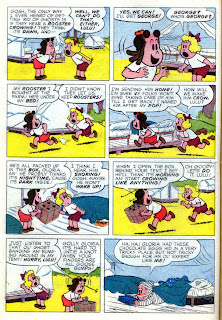 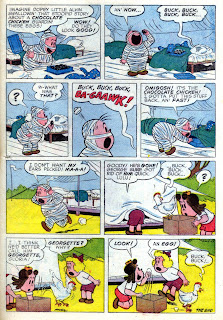 Is there no depth of human depravity to which Tubby won't stoop when candy is involved? You'd think he would learn, after so many embarrassing moments of utter failure, that crime don't pay.

I like the subtle threads of continuity in these summer-camp comix. It's great that Stanley brings the chicken back from "Twinkle Toes," and uses said fowl to provide a sweet little grace note at story's end.

And, last but not least, we're treated to a gem of Tompkins Philosophy (from the unpublished tome, The Tao of Tub:

"It's a waste of valuable time, smackin' your lips over something that you didn't get!"

There's one more batch of stories coming up, probably on Saturday. See Gran'pa Feeb wreak havoc at Camp Tiny Tot! Hear Tubby tell a fairy tale instead of Lulu! Wow to Lulu telling a fairy tale as well (no Lulu comic is complete without one such moment)!

Today's post goes out, with gratitude and thanks, to Bernard. I'm glad I can bring these stories back from the memories of childhood days. Your mom had great taste in comix!
Posted by Frank M. Young at 6:00 PM

Frank - Thanks again for unearthing these wonderful summer camp stories featuring Lulu and Tubby and their incredible supporting cast of players. Coming as they did near the end of John Stanley's incomparable reign as the master ringleader of Lulu's frolicsome adventures, they still retain the wonderful and somewhat anarchistic glow of his earlier, classic work with these characters. By the way, I think you identified these latest summer camp stories as the first of such tales from 1957. They (as I'm sure you know) are actually from the second summer camp giant issued in 1958. I read these books when they first appeared (and many times since over the years) and am still amazed by their freshness and pure story-telling brilliance.
Thanks again; your absolute dedication to preserving the wonderful contributions of John Stanley and his creations is fondly appreciated by one and all!!