Fireworks make me uneasy, and hot dogs make me queasy, so here's my way of sellybratin' the 4th with you! (Truth told, I'm going to a 4th soiree that promises to have both hotdogs and fireworks. I'll do anything for a clever opening sentence!)

Here is the long-sought debut of Stanley's first original character for the comic books: Peterkin Pottle.

He rated a significant fanfare for Raggedy Ann and Andy. They re-did the logo, and gave Peterkin a memorable front-cover send-off. Speaking of which... 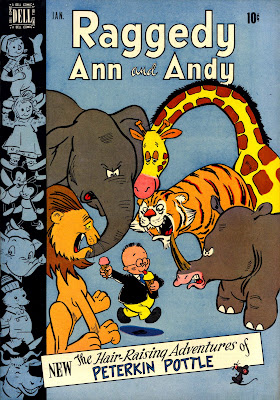 Ad per the new house policy, no yakkin' from me 'til after the story. I apologize for the spectacularly poor printing job Western Publ. and Litho. did for this story. Could those reds be anymore off-register? It detracts from one's appreciation of Stanley's cartooning grace. Said grace, and complementary verbal wit, still shine through strongly...

Wow... a sweet, charming ending! This story may surprise those Stanleyphiles who groove to the harsher, darker, mean-streets side of our hero's writing. Indeed, this maiden voyage of Pottle differs from subsequent episodes in several ways.

From the start, poor Peterkin's fate as alienated schlub is set in stone. When reading this story, I had the sudden realization that, via Peterkin, Stanley got a handle on the character of Tubby Tompkins, from his million-selling Little Lulu comix.

Before PP, Tubby is a more generic wise-guy character, all bluster and little or no neurosis. In "Pottle"'s wake, Tubby gains some of Peterkin's psychological profile. By writing and drawing this feature, Stanley got the elements that made Tubby the most fascinating member of Lulu's dramatis personae.

Peterkin anticipates some of Tubby's classic self-absorption in the fantasy sequence. Peterkin's intro as the hero is handled with sublime understatement. As with Tubby, Peterkin is, in his own mind, the cool/calm/collected master of his universe... able to leap tall buildings in a single bound, etc., etc., etc.

This discrepancy between Peterkin's inner world, and the harsh reality of real life, becomes a core of Tubby's persona in the 1950s. This is a classic Stanley anti-hero trait. Woody Woodpecker displays this same flight from reality in several of his Stanley-authored stories.

Altho' Peterkin is immediately subject to neighborhood cruelties, he seems less malformed--and more misunderstood/sympathetic--than he'd be in later episodes. Indeed, the improbably touching wrap-up is unique to this series.

I prefer Stanley with dark and light interwoven, as in this story, and as in the best Lulu stories. "Pottle" gets amazingly grim and harsh in its later episodes. There's a Walter Mitty-ish aspect to Pottle, in this story, that is lessened as the series rolls on.

Stanley's darkness is so intense, and so effective, that it can be hard for me to take. I think it reminds me a little too much of my own troubled childhood (heck, let's make that adulthood, too, while we're at it).

My unease at the dark side of John Stanley is a testament to his effectiveness in that regard. He could get under the reader's skin, and dig into the nerve center, while ostensibly serving up a souffle of "kiddie komix" a la Dell.

Note that Stanley illustrates this story with pen and ink. He switched to brush for later Pottles. Stanley got great with the brush in his 1960s comix. He was much stronger with the nib in the '40s and '50s.

This is beautiful cartooning--dig those animals, for example! Tigers, elephants, rhinos, gorillas, lions--all rendered with impressive grace and style! Stanley's lumpen human figures contrast strinkingly with the bold, expressive images of animals. That tiger on p.3, panel 4 is spectacular cartooning!

Western Publ. and Litho. were idiots not to realize--and exploit--Stanley's talents as a "name" cartoonist, as they did with Walt Kelly. Small wonder Stanley became embittered in later years. He (and Barks) got a raw deal in the long run.

At the time, as they did their greatest work, both creators were given a great deal more free room than most of their comix colleagues. Imagine a Barks or Stanley working for DC, or Timely...no, I take that back. I can't imagine it.

Creative freedom vs. public acclaim... a few fortunate comic book creators (Jack Cole, to name one) had both, but the combo proved most elusive and rare.

Come back tomorrow, as I've got yet another treat for you--from this same funny-book! Yow!

"listen lady, kids have to play some place"