Times are tough all over: that's the sense I got from my previous post. Thanks to the two kind souls who responded. Look for super-cool news involving one of these kind individuals very soon!

But it's also summer, and that means it's time for another Little Lulu-at-summer camp shindig!

I recently located this second LULU summer-camp giant, from 1958. It's new to me, and it's a pleasure to present it to you.

I don't have much to say that I haven't said before about these summer camp giants. They follow an established formula. The formula works because the characters are invested with great personalities and quirks. These quirks continually up the narrative stakes, and fuel the stories.

What might be paint-by-numbers, mind-numbing blandness in most hands becomes vivid, humorous, consistently rewarding material a la John Stanley. 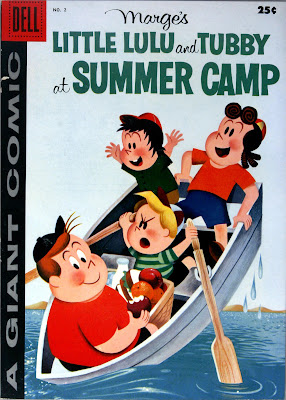 Here are the first three stories from this 100-page book. I'll keep posting the stories 'til it's all complete.

The opening story offers a novel variant on the typical summer-camp-giant introduction. "The Big Frame-Up" is a highly charged piece of writing. Stanley captures the tension of childhood friendships here with a keen eye.

[A note to those who tried to read this story before today: oops! Yow! Sorry for the missing pages... I somehow missed them. Here they are now. Please re-read this story...] 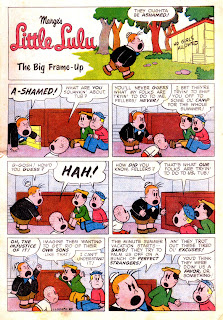 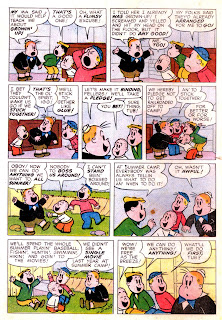 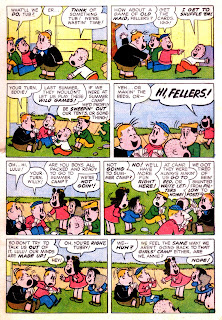 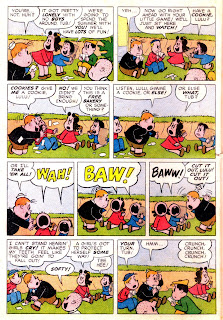 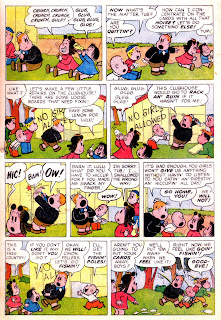 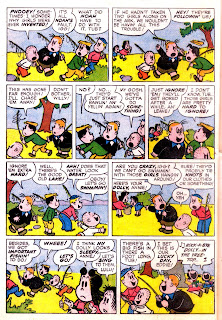 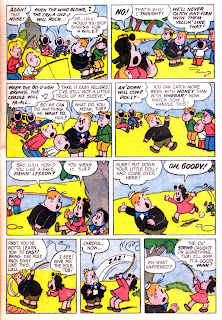 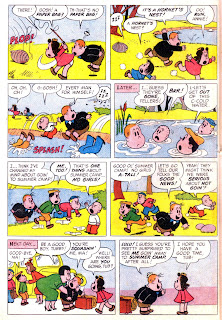 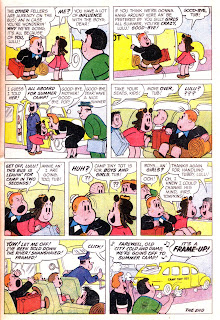 Tubby is rightfully paranoid in this story. Like a film noir protagonist, he's hounded by pre-determined, inexorable fate. At the end, when it's revealed that Lulu and Tubby's mother have conspired in this large-scale erosion of Tubby's freedom of choice, Tubby is righteous in his indignation.

This comedy of antagonism is also a comedy of invasion. Tubby can't compete with Lulu's keen wit--perhaps that's the rub for him... she's trumped him yet again, despite his high self-opinion.

Darn it! I said I wasn't going to say anything, but I can't control myself...

"Bushopper" is a brilliant Tubby solo piece in which his stubbornness and self-absorption creates 20 shades of trouble--all of them inventive and amusing. 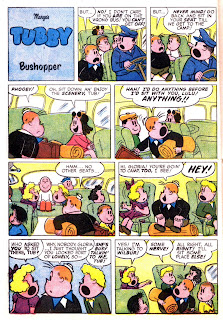 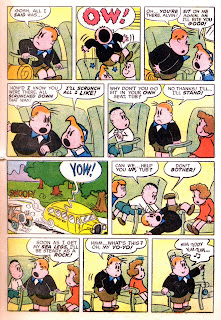 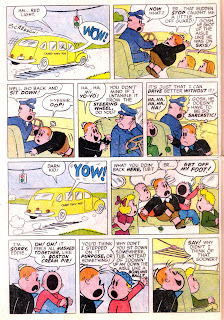 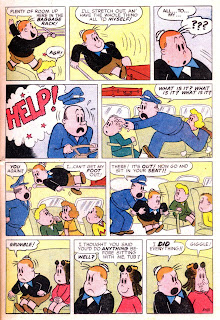 Stanley's wit is subtle here, and I appreciate that he respects the reader's intelligence in his staging of events. It's especially impressive when one considers that the target audience for these comix were grade-school kids.

Stanley must have known, or sensed, that adults read these comix as well. Lulu wasn't a top seller just from childhood purchases. Friends of mine who grew up in the 1950s recall their parents regularly reading Little Lulu, without shame or subtext; one person remembers his mother buying it every month, alongside Family Circle, Redbook, Collier's and other coffee-table staples of post-war America.

Whatever his motivation, Stanley's was the gift to write for young and adult readers, and offer something of value to both--without condescending to one or the other.

In "The Guilty One," Tubby completely falls apart. I'm struck by the richness of Stanley's writing here, and how deeply invested he is in every character.

And, as Thad pointed out, check out the decorations on the tepees on page 19! Er, um, uh... I know that was a Native American symbol before a certain hatemonger adopted it for his ill-fated Evil Empire. Still, it was the 1958, and people surely had that icon fresh in their collective memory... 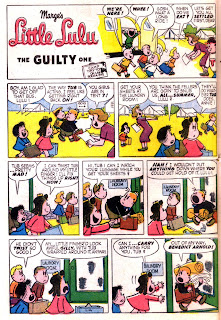 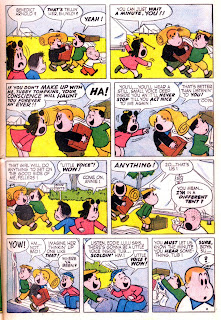 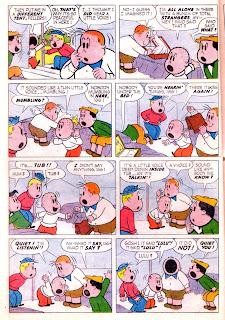 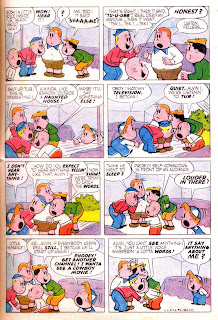 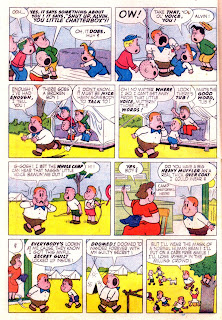 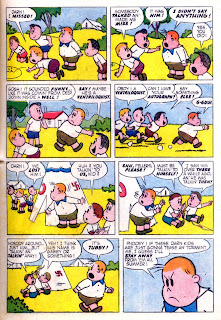 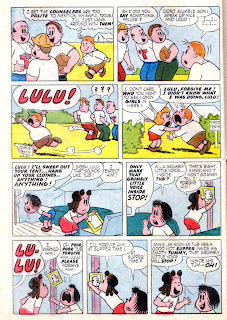 "I'll wear the mask of a normal human bean! I'll put on a care free smile! I'll lose myself in the milling crowd!" Tubby is at his finest in this story.

As well, the boys' interactions, and how they turn on Tubby, and ostracize him, rings true. It imbues the story with tragicomedy that builds. "The Guilty One" approaches the tension of an EC "SuspenStory" while never forsaking the fundamentals of the Lulu universe.

More soon--maybe even tomorrow, if I can get up early enough...
Posted by Frank M. Young at 10:18 AM

This is wonderful, but aren't a page or two missing from the first story (before the fishing scene)?

I love your blog. I read little Lulu since i was a child, and i still do it.
¿Do you know a long chapter called: Captain Yo- yo?
The protagonist was Tubby.
I never saw it again.
(sotty for my english)
And thanks a lot for this wonderfull blog.

1951 was indeed closer to WW2, but it was also a time when more people were aware that Hitler didn't have a monopoly on the swastika. My parents were both in the war, my father in the OSS and my mother a supervisor on Pfizer's penicillin production line, but I grew up in the 50s with a fancy swastika-decorated, "Red Indian" themed spoon among the silverware. It took several more decades of Hollywood movies with Nazi bad guys before swastikas went over the line.

I believe that was reprinted in one of the Golden Comics Digests, as I recall that, and never had the original Dell Giant.