Are you ready for this? Because if you're not, I feel hesitant to put this story on the table. Get a cup of coffee, make yourself comfortable, take a deep breath, and read this: 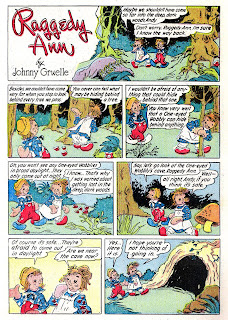 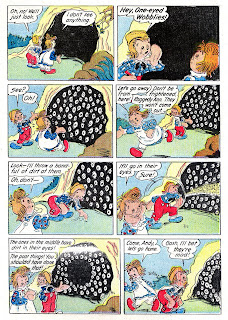 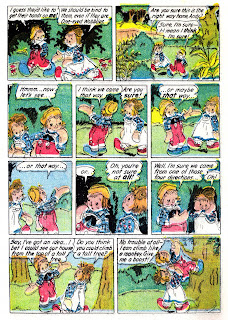 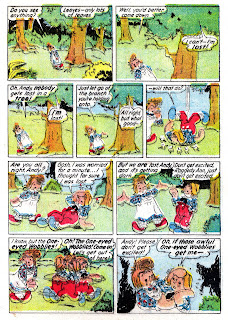 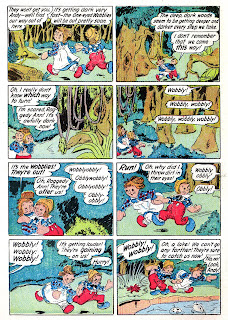 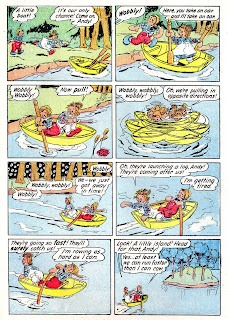 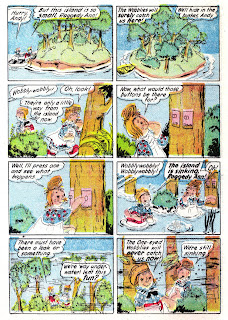 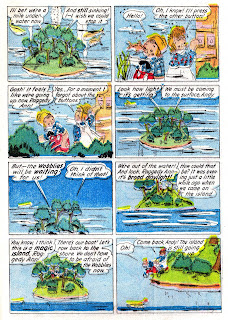 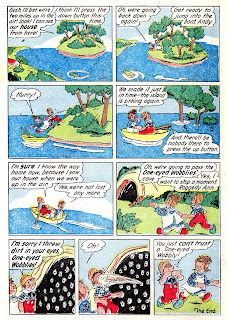 
This is the ideal John Stanley mix of dark and light. The contrast of the title characters' cheery, mischevious, naive nature, and the embodiment of unseen but deeply felt terror that pursues them is stunning and haunting.

This is one of Stanley's most authentically dream-like stories. In this piece, he masterfully tapped into subconscious veils of primal fear, and the matter-of-factness of dream logic. All the elements are there: the deep, dark woods; a menace that is well-known but never clearly seen; random acts of mischief that engage the menace into pursuit; and, finally, a deus ex machina device that the characters regard as commonplace. It's here, and we know how it works, so let's use it, and see where it takes us.

Again with the large objects rising and descending! We just encountered this motif in "The Mighty Mites," and, of course, in "The Guest in the Ghost Hotel." The push-button elevator island is one of the most imaginative moments in John Stanley's career.

It's a perfect touch that the Raggedies don't make a big deal out of this dreamscape set-piece. It's a means to an end, and it rescues them from the One-Eyed Wobblies (who wouldn't really have a beef with them, had Andy not thrown sand in their eyes...)

That's another beautiful moment in this story--the childish provocation of the unseen threat. It's like a kid throwing rocks at a hornet's nest, or poking holes in an ant-bed. It's a very natural kid thing to do--an action that connects vividly with the reader, who has done (or will do) such things throughout their lives.

Stanley's language is a delight in this story, as well. After the incident with Andy getting lost in a tree, Ann begins to freak out. The nonchalant Andy tries to reassure her. Ann replies with an answer that logically sums up the crisis they face: 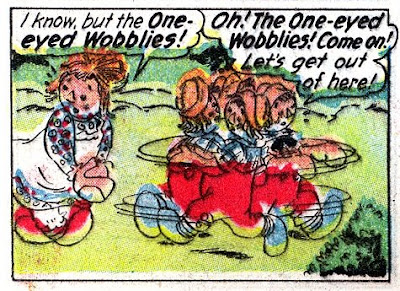 That is beautiful writing--it cuts to the heart of the matter, and expresses fear in colloquial kid-speak.

The Raggedies are perfect protagonists for John Stanley. They're non-entities which can be dropped into any situation. I like how unfazed they are by being plunged into the depths of the body of water (lake? ocean?) via the elevator-island. I suppose that, being sentient dolls, they need no oxygen intake. They can be plopped into any locale (the moon, Hades, Nebraska). All they have to do is act and react: instant story!

Stanley's writing lost much of this spontaneous vibe from the late '50s onward. His imagination didn't cease to function; I think his priorities as a storyteller shifted. He seeks firmer ground at all times, even when, as in the Yo-Yos stories of Nancy and Sluggo, his protagonists are pitched head-first into a nightmare world. Stanley strives to clearly isolate dream-logic events and conscious experiences in his later work.

I'm very fond of the dream-state he achieved in stories such as this and "The Guest in the Ghost Hotel." I am never quite sure if these stories' events are "real" or "dream." John Stanley was really onto something with this vein of stories. I wish he'd done more of these, but I'm grateful for those that exist.

Thanks to art spiegelman for tipping me off to this story's existence. I'm glad I finally found it, and can share it here.
Posted by Frank M. Young at 9:19 AM

WOW. This is a huge inspiration. Thanks for posting it. Your blog is a true joy and I'm very thankful it exists.

Such a great story!
The second Wobblies story is really good too, though lacking the island / elevator it's not nearly as inventive.