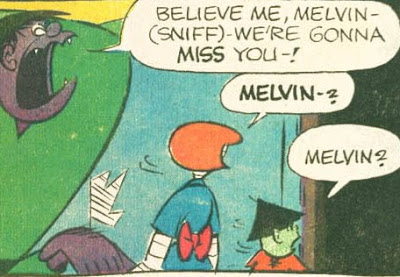 I think I suddenly 'get' Melvin Monster, one of John Stanley's "auteur" comic book series of the 1960s. I recently picked up a complete run of the title (save #10, which is a reprint of the first issue).

Having read them, my opinion of the series has changed for the better. There is a great deal of inspired writing here. Stanley's bold, simple artwork (at times reminiscent of Dick Briefer's similar but looser work on the humorous Frankenstein comics of the 1940s) is a compliment to his concepts and dialogue.

Still, there are forbidding elements to this series that make it hard for me to embrace it completely.

Melvin Monster's is a grim, harsh world to inhabit. It is, however, consistent and well thought-out.

What bothers me about the series is the cruelty constantly hurled at Melvin, who is, at heart, a sweet and innocent being. Melvin is likable, despite being a goody two-shoes.

I'd love to see Casper, the Friendly Ghost or "playful" Little Audrey face the Spanish Inquisition. They represent the type of squeaky-clean, one-dimensional "goody two-shoes" characters that I can't help but dislike.

Melvin, on the other hand, is merely a non-conformist. He's the only nice guy in a world of monsters. It is a clever switch on the then-popular monster comedy genre, as seen on TV's The Addams Family and The Munsters.

Of course, to "sell" Melvin's niceness, it's necessary to make everyone else a raging, grade-A asshole. How else, logically speaking, would most monsters behave? Remembering that Melvin is the anomaly in this world can make its nastier elements a bit easier to stomach.

Melvin's parents, as I've commented elsewhere, really disturb me. Talk about your co-dependent, mutually abusive couple! It's Psych 101. You have the surly, prone-to-rage dad and the submissive, swimming-in-denial mom. So many American kids who grew up in the 1950s and '60s faced this set of parents. I certainly did, in my own way.

Perhaps John Stanley did, as well. These characters are too knowingly rendered, too forcefully present in these comic book stories. Despite Stanley's sharpness as a writer, the psychological weight of Melvin's 'rents leaves a bad taste in my mouth.

Ditto for Cleopatra, the alligator (or crocodile?) whose sole goal is to devour Melvin--a mission forever thwarted, thank goodness.

Anyway, here's "Supermonster," one of the more offbeat stories from an already offbeat series. Savor the mix of macabre themes, dry puns, and life-or-death struggles that distinguishes Melvin Monster in comix history.

hi there, fella!
Tom Devlin has posted about Stanley and your great blog.
In this one he refers to Stanley's golden age and says he's in disagreement with you about this one. Maybe because of your opinion about Melvin Monster and Thirteen Going On Eighteen? I don't know really. But, what's this age exactly? I figure that is 1960's when he make to start on his own "creatures". I don't know either. Can you tell me what's the Stanley's golden age for you?
This weekend I'm going to translate some of your amazing recent posts. Man, you've been working hard. Thanks a lot for it!
By the way, congratulations for your The Carter Family "project" with David Lasky. I don't like country really, but this doesn't care, do it? Hope a beautiful work!
from a devotee man-

Thanks for letting me know about Mr. Devlin's very nice write-up! Was I flattered!

My "golden age" for John Stanley's comics begins in 1945--the year he began Little Lulu and began, in general, to do brilliant writing--and ends in 1963, with the cancellation of Dunc 'n' Loo.

The 1950s was his peak decade as a creator. I find his work of those ten years to be consistently intelligent, provocative, fresh, nimble and effective.

To my taste, Stanley became more shrill and brassy in his 1960s work.

I love the fact that he drew (and signed his name to!) the mid-1960s work. I honestly think his best days as a writer were behind him by the time he started his two "auteur" comics.

As I said in this post, I have warmed more to "Melvin Monster" recently. I still find "Thirteen Going On Eighteen" to be too shrill and neurotic. The characters seem to be in a constant state of agitated misery in "Thirteen..."

Thank you for your kind wishes on the Carter Family graphic novel. David Lasky and I are working hard on that project. We have started up a blog devoted to this project:

David and I will both post regularly to this blog as well.

The story of the Carter Family's life and career is an incredible one. You don't need to be a country music fan to find the story entertaining and moving.

It is always a pleasure to get a message from you, Gabriel! I hope we'll get to meet in person some day!

Melvin has always been a favorite, ever since I ran across issue 10 on the newsstand. Years later I rediscovered him at a comic convention and have found that the stories are even funnier from an adult perspective. Yes, the parents are at terns clueless, furious, and unsympathetic. Maybe that's why they seemed so familiar ...

Melvin is the ultimate rebel, doing bad by doing good.