I've written about the controversial Li'l Eight-Ball on the defunct prior incarnations of this blog/site. His presence in the New Funnies anthology, home of many Stanley stories from 1943 to '48, has caused many PC Police alarms to be set off in recent years.

The 1940s witnessed a resurrection of Afro-American stereotypes in American pop-culture. They'd not exactly disappeared, but they assumed a higher, brassier profile, especially during the war years.

This may have been a side-effect of the highly visible Afro-American presence among US troops during World War II. I'm certain books have been written on this issue, and I don't pretend to be a social anthropologist.

Still, one wonders why there was such a strong resurgence in offensive anti-AA imagery in the 1940s. It continued after the war (in fact, it reached a horrifying peak in Tex Avery's 1948 MGM cartoon, Half-Pint Pygmy, a structurally brilliant effort horribly marred by its mis-use of a black character.)

Li'l Eight-Ball was a creation of the late 1930s. He first appeared in the Walter Lantz Cartune A-Haunting We Will Go, directed by ex-Disney nutjob Burt Gillett and feautring uncredited vocals by Mel Blanc.

This cartoon can be seen on Universal's second Woody Woodpecker and Friends DVD collection. Stereotypes aside, it's a charming, rather wild-spirited cartoon.

Eight-Ball fizzled out, as did Oswald Rabbit and Homer Pigeon, as a bona-fide screen star. As comic-book properties, all three had a long-lived berth in New Funnies.

The story presented today, which may or may not be Stanley's work, was Li'l Eight-Ball's final comic book appearance.

Stanley sporadically wrote the "Eight-Ball" feature. His most memorable entry, which I plan to re-scan and re-post here soon, was in NF 101--a nightmarish, Roald Dahl-esque fantasia filled with traumatic images and events.

This final story has ample creativity, nightmare imagery, and fourth-wall breaking to suggest John Stanley wrote it. Something in its overall flow doesn't feel right to me. Thus, I ask, in all sincerity: whadda you think? Stanley? Not Stanley? 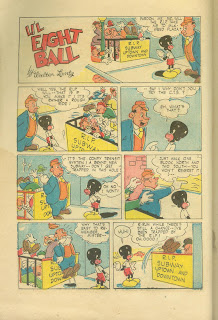 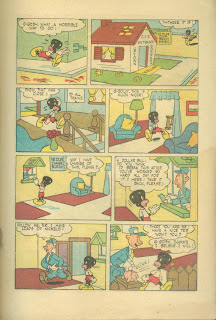 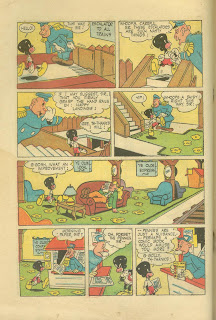 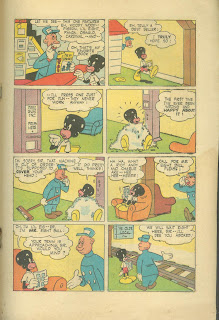 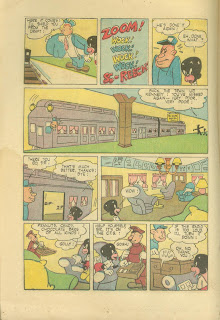 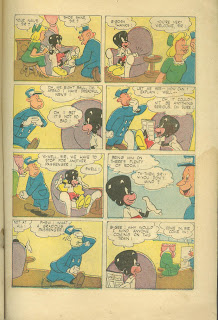 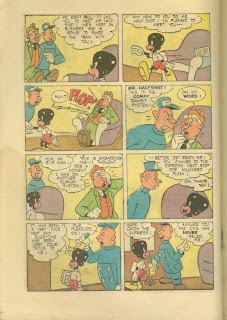 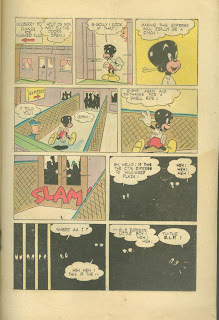 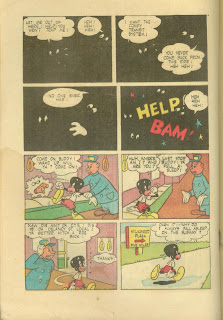 Eight-Ball's hush-mah-mouf dialect is absent from this story, which has the intense urban atmosphere typical of Stanley's work. Most of Eight-Ball's comix stories take place in a pokey rural environment.

The story is a pointed satire of mass transit--an almost Kurtzman-esque series of expectation-reversals. This story might have been the daydream of many a post-war New York commuter--kind treatment by transit staff, comfortable seating, coddling and endless freebies. That is, until events take a turn for the worse.

Before darkness falls, amidst the humorous switcheroos on the commuter experience, one gentle self-referential moment pointedly reminds us we're reading a funny-book: in fact, the very issue that the addled news-dealer offers to Eight-Ball: 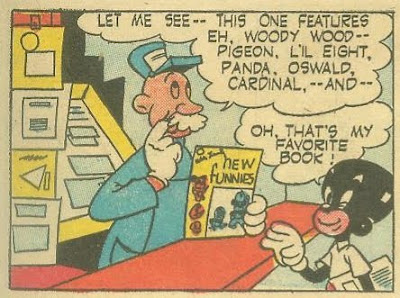 Here's the cover of this issue: 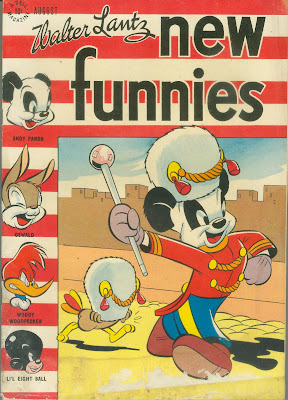 This business seems too clever for a staff writer, or another free-lancer. It smacks of an "inside job"--akin to the Woody Woodpecker story posted HERE, from the previous issue of New Funnies, which has caricatures of Oskar Lebeck's staff, including John Stanley.

Eight-Ball's exit from the Comfy Transit System, and his engulfment in the dark bowels of the RIP (Rapid Inter-Urban Perambulation?), offers a striking prediction of the techniques of EC artist Bernard Krigstein. As well, this sequence contains Stanley's trademark "floating eyes in blackness" and sinister "Heh! Heh! Heh!" motif: 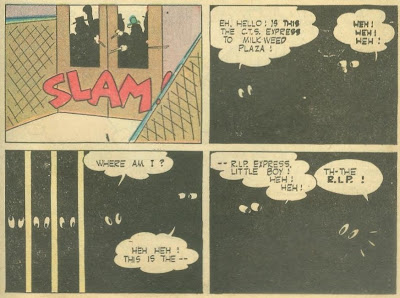 Enough Stanley tics appear in this story to convince me it's his work. As we've seen with other stories, his work varies in quality and impact, possibly due to editorial input. This may be another instance of Stanley's work being revised by another hand.

If this isn't Stanley, it's a decent imitation. Stories such as this one remain puzzles to me. As said, I'm almost convinced--at least 88.8% certain this is John Stanley's work.

As poor Eight-Ball's adieu to the printed page--possibly his final appearance in American mass media 'til the DVD revival in 2007--this story is a remarkable end to an unremarkable career.

PS: For a fascinating complement to this post, please visit Michael Barrier's blog for T H I S follow-up piece. It answers some of the questions I ponder here, and offers Mr. Barrier's smart and savvy thoughts on the matter.
Posted by Frank M. Young at 9:54 AM

Add ears to him and he would be a dead ringer for Mickey Mouse - right down to his clothes and shoes. Personality wise, at least in this story, he's already MM. Maybe that's why he vanished from the landscape.

Nice post, thank you Frank! A prolific artist such as John Stanley must be granted some inconsistency. As you astutely point out, the story's pacing is off, when compared to a Little Lulu or Tubby story. And, on the first page, when the man is comically consumed by the subway crowd, he doesn't say "Yow!, but instead utters "Oooooh." On a later page, Eightball says "Yip." instead of "Yow." Even so, this felt like a Stanley story to me. The humor, and thinly disguised satire is very similar to the stories Lulu tells Alvin. One can easily imagine Lulu, with Alvin grumpily sitting in her lap, telling us abotu the time she was a poor little girl, and never coudl afford to ride the train, until one day...

whether it's Stanley or not, i love it!