You Axed For It: The Rest of Ghost Stories #1, 1962: Nightmare Stallion Held In Rural Attack; Sewer Monster Vacates Neighborhood, Is Vanquished 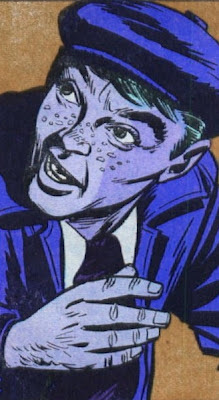 Our tour of the sinister side of John Stanley's comix must include the highly eccentric horror titles he wrote in 1962. As I posted 50% of the contents of Stanley's lone issue of Ghost Stories a year ago, I may as well finish the job.

I stand by my comments on those stories, in that 2008 post. If you'd like to review them, click HERE to read "The Werewolf Wasp" and "The Door," the other two stories from Stanley's lone issue of Ghost Stories.

It's said that we can learn from a great creator's mis-steps. As there is so much of Stanley's output to consider and discuss, this maxim rings true here.

I consider Stanley's forays into straight horror to be on par with the films of Ed Wood. To be more precise: taken at face value, as generic entities, with an obligation to meet or surpass set expectations, they are failures. As unguarded tours of their creators' frenzied subconsciousness, they are things of great wonder.

These stories read like remembered fragments of vague nightmares. They seldom, if ever, wander into the expected generic trappings of haunted houses, cemeteries, and such.

Their curious derivation from the genre's norms contrasts with the many horror-flavored pieces Stanley wrote for his humorous "kid's comics" of the 1940s-1960s. The cemetery is as constant a setting for Little Lulu as the classroom or the candy store. And, of course, in Lulu's ongoing stories-to-Alvin, themes of the supernatural are a given.

Stanley never wrote a finer melding of horror and humor than in his infamous "The Bogeyman," among his only "Little Lulu" stories to be axed by the editors. [That story is in print, via the final black-and-white volume of Dark Horse Comics' ongoing Lulu series.]

A sense of dread, failure, loss and uselessness is at the heart of John Stanley's fictive world. It fuels the motivations of his characters, gives rise to their vivid, entertaining cognitive biases, and continually provides stake-raising leverage in his stories.

So why, when Stanley turned to straight horror stories, did his storytelling gifts so fail him?

These horror tales always seem to grasp at some half-defined thought which, like Aesop's fox and his grapes, are tantalizing but utterly out of reach. It is fascinating to see Stanley's struggle to realize the imaginative but muddled concepts of these pieces.

The terror in these stories often involves a dreamlike inability to escape an overwhelming physical threat. This is at the heart of Stanley's delirious nightmare "remake" of "The Black Stallion." [Utterly no resemblance to the classic, beloved children's book of the same name.]

The art here is, according to Steven Rowe, by Gerald "Jerry" McCann. Unlike 99% of the Dell artists who remained after the Gold Key schism, McCann was a competent artist. He brings a certain majesty to this deeply atmospheric, cockeyed account of equestrian menace. 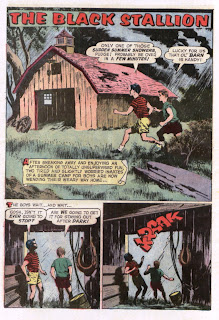 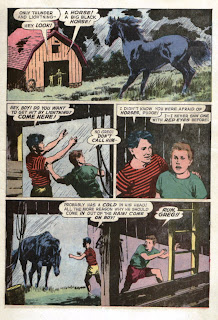 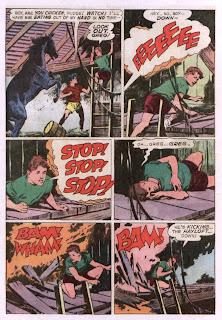 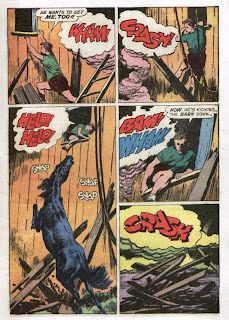 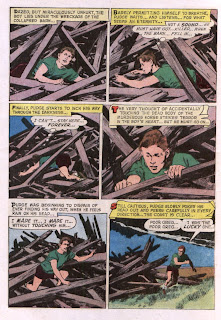 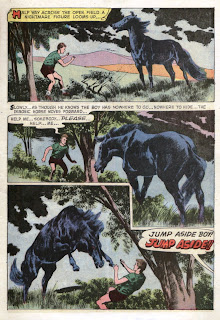 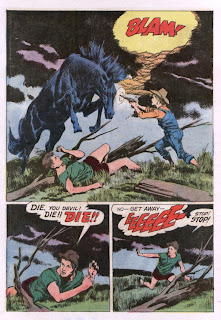 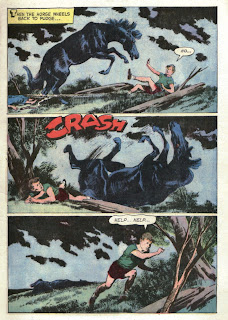 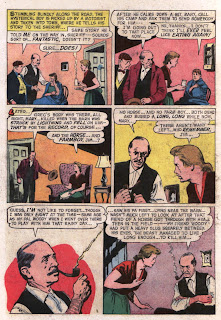 This version of "The Black Stallion" is an exercise in wild atmosphere, and in subverting archetypes young readers would normally associate with a heart-warming, welcoming narrative. Incoherent as it is, this piece makes marvelous misuse of genre expectations.

I like that the character named "Pudge" is drawn as almost athletic in build. Either artist McCann had tongue in cheek, or the name was changed after the art was turned in. It lends further incongruity to a story already overfull.

"The Monster of Dread End..." [note the ellipses!] has been featured on the Internet more than once. For completeness' sake, I feel compelled to include it here.

"Dread" was originally the first story in the book (and "Black Stallion" the last). This deeply nightmarish, atmospheric piece works best as a finale. 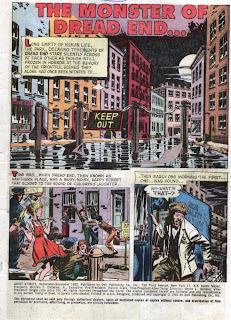 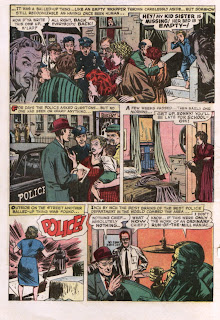 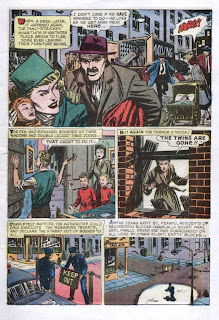 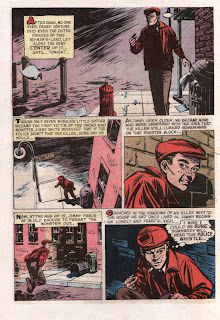 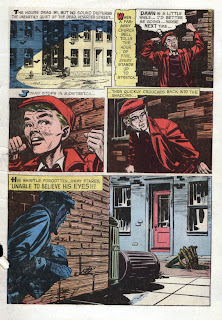 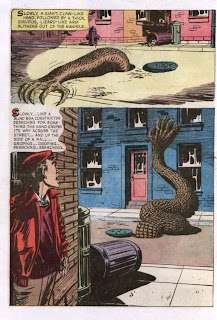 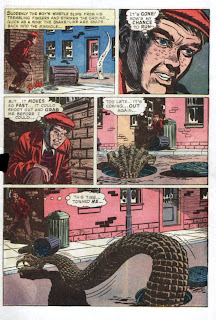 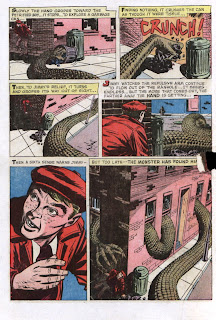 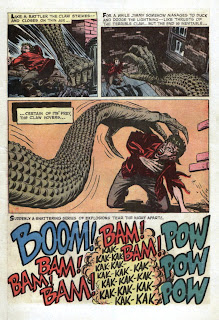 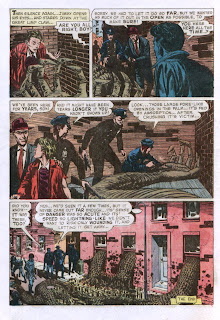 Unlike most of Stanley's horror efforts, "Dread End..." provides a coherent backstory, instead of just starting in an abritrary fashion. No effort is made to explain the origin of the horrible sewer-creature, or to even guess what it might be.

As with elements of a nightmare, it simply is, and the protagonists of the story are left to deal with it as best they can.

"Dread End..."'s confined urban settings closely tie it to Stanley's Little Lulu, Dunc 'n' Loo and other series. The introduction of a Lovecraftian monster to these dreary man-made environs is clever, if not terribly original.

Finally, in the story's 15 year-old protagonist, Jimmy, Stanley provides a reliable agent to navigate his nightmare concepts. He's a rare example of a Stanley protagonist who is not entirely guided by his cognitive biases.

This essential figure is sorely lacking in his other horror stories. Thus, "Dread End..." succeeds where most of Stanley's other genre efforts fail. It's a potent blend of dreamlike imagery and rooted, street-level narrative.

The finale, in which several men in suits and hats confess they've been hiding in the Dread End slums "for years," and we see the genuinely gory defeat of the sewer-critter, is both disturbing and absurd. Shall we call it "disurd?"

I would love to know how this and the king-size Tales From The Tomb were green-lighted by Dell. As with Linda Lark, Student Nurse, the straight horror comix are a curious attempt, by Stanley, to redefine himself as a creator.

Stanley had every right to explore new territory in his comix work. I get the sense that, if he'd been given a longer window of time to experiment with these horror stories, he might have hit on a more realized, highly original approach to this overworked genre.

As artifacts of Stanley's creative process, these horror stories are deeply fascinating. They lay bare the essential subconscious nerve endings of his storytelling style. They also demonstrate how expertly he balanced these elements with commercial "frosting" in Little Lulu, Nancy, Dunc 'n' Loo and his other truly great comix works.
Posted by Frank M. Young at 10:26 AM

Wow! My estimation of these stories is higher than your own, but I find your analysis insightful, Frank. Thanks for posting!

I enjoyed these quite a bit. The stories are so short, but still, at their heart, really quite creepy, so I can forgive them their lack of development in other areas.

Thanks for the posts.

the art on the Black Stallion is the work of Gerald "Jerry" McCann.
while Im not one them, some folks have called Ghost Stories #1 the scariest comic ever done. So obviously some feel its very successful.