It's going to be hellishly hot here in Seattle today--and even hotter over the weekend. While the sun's away from my living room, and it's still relatively cool, it's time to make a post.

Our first story posted was a "Tubby" piece written and drawn by John Stanley. Here is an earlier series Stanley wrote and drew. Incongruously placed in Dell's marshmallow-gentle Raggedy Ann and Andy title, "Peterkin Pottle" is among the harshest, cruelest series in all children's literature. If Roald Dahl had written comics, they might go something like this...

Peterkin is a Baron Munchausen Jr., with a distinctive Stanleyian twist. Peterkin is a pariah. NOBODY likes him--not his teachers, not his classmates, and, presumably, not even his parents. He makes Tubby Tompkins seem a remarkably well-adjusted soul in comparison. (Like Tubby, he is overweight.)

Peterkin's only respite from the world's seething contempt is in fantasy. When life gets too grim for him, he daydreams himself away to a burlesque of familiar genres--the Wild West, pirates, African safaries and, in this case, an undersea odyssey focused on the harm of any and all aquatic life within reach.

There ought to be something delightful about Peterkin's fantasies. Instead, they seem sad and very lonely. They're typically quite violent--and their level of violence is off-putting.

Flawed and troubling tho' they are, Peter's daydreams end all too soon. If he's fortunate, one living being will take a moment's pity on him, and give him a small token of kindness.

Whatever brief acceptance occurs at story's end, it's long gone once the next one begins. Peterkin's world refuses to cut him a break.

It's not too far a stretch from Peterkin Pottle to a character such as Travis Bickle, the anti-hero of Martin Scorcese's equally dark and troubling film Taxi Driver. Perhaps writer Paul Schrader read "Peterkin Pottle" as a post-war tot, and filed its gloomy vibe away for future reference (see file "Losers, Alienated"). If Peterkin's treatment by the world continues as we see it in these stories, his chances of growing up a scarred sociopath are sadly probable.

In stark contrast, John Stanley's drawings for this series are felicitous and sprightly. Creepily, he opted to not give the series' Caucasian cast members any pigmentation--they are truly fish-belly white.

Stanley's bold, loose brushwork is pleasing, and his line is full of life. I'm geniunely surprised that he didn't sign this series. Other Dell artists, such as Dan Noonan and Walt Kelly, often signed their work.

Only once, prior to the 1960s, did John Stanley's name appear on any of his numerous comics. It's an issue of Little Lulu [sorry, I can't recall which one] wherein he receives a small typeset credit in the comic's inner front cover.

"Peterkin Pottle" bumped the title feature from the covers of their own magazine for several issues. Thus, we'll start this despair-fest with Stanley's cover, which hints at the discomfiting violence that awaits within.

"Enjoy" is not the right word for this story. "Observe," perhaps? Few mainstream comics series contain such strident cries of angst and isolation as "Peterkin Pottle." 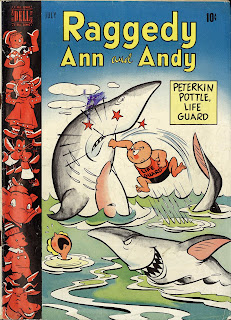 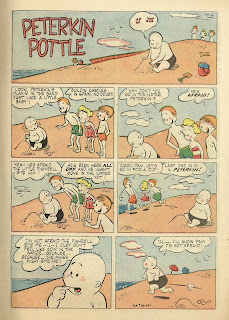 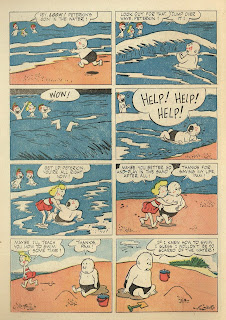 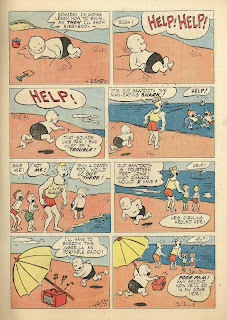 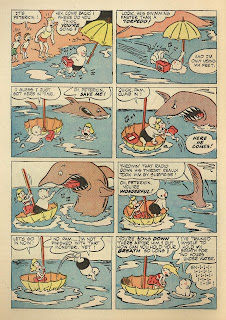 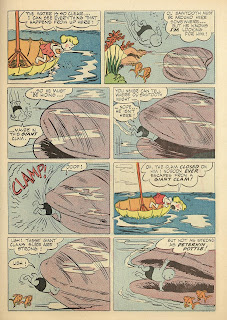 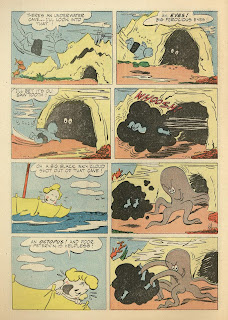 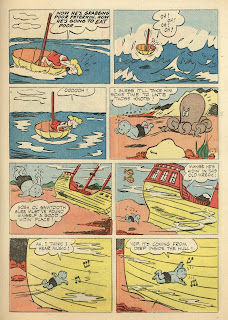 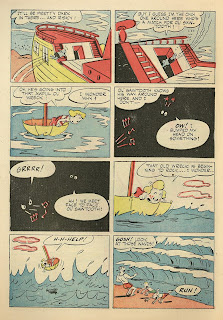 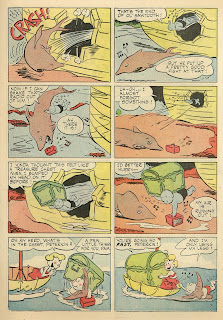 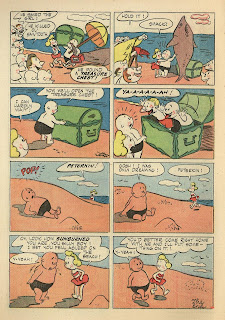 Thank you for your kind comments. I'm just happy to share this material with the world. It's not easy to find around here, either!

By the way, from now on I'll try to make free versions in spanish language of your posts in my blog. I have posted the first one now, I hope you don't mind. Of course, you're accredited and linked.
Thanks again and best regards-

That sound you hear is me, blushing! This will give me a chance to make use of my four years of Spanish study. Spanish is a lovely language, and I'm honored by your translation!

I added your blog to my "blogs we like" link. Some great posts on your blog!

Hi there again-
I've been reading again this story: it's astounding! Peterkin's daydream is particularly generous: he's kind of a superhero, but he's not the only one with super-powers: Pam's got a supervision!How long was this extraordinary character ongoing on the inside of the "Raggedy" magazine?
from a shocked soul-

Peterkin appeared in seven issues of "Raggedy Ann" comics-- #32-38. The comic expired with the next issue (39), which was Pottle-less.

I greatly enjoy your blog "Joyville." Your illustrations and techniques are terrific and have great appeal! I check your blog daily for more examples of your artwork!

Yow! Ok, Frank! I didn't understand the expression "bumped the title feature from the covers" :P I'm deeply touched by your words 'bout my work. I hope you upload more Peterkin scans in the near future.

English can be such a messy language! It might have been less obscure for me to say that Peterkin Pottle became the cover feature of Raggedy Ann and Andy comics for several issues.

It's a weird situation--I cannot think of another comic book where the title character didn't appear on the cover.

When I get more Peterkin, I'll post the stories here! I have another Peterkin Pottle story on the original "Stanley Stories" website.

Every time I try to bid on these comics on eBay, I get bested by someone else. I'm still looking, though...